The governor of the US state of California has declared a state of emergency because of raging wildfires.

High winds and extremely low humidity have hindered efforts to contain blazes burning in the northern and southern part of the state.

The Kincade fire located in Sonoma County, north of San Francisco, first started on October 23. It is the largest fire currently burning in the state.

More than 6,400 hectares (15,800 acres) of land has already been scorched and as of late Sunday, the fire was only 5 percent contained.

About 2,000 fire personnel were assigned to battle the wildfire.

Along with other smaller fires in northern California, 180,000 people have been forced to evacuate the region as homes and business are at high risk with the fast-moving blazes.

Wind gusts reaching as high as 100 kilometres per hour (62 miles/hour) across the area last weekend were expected to ease by Monday morning. Along with the lighter winds, relative humidity that had been as low as 6-8 percent was expected to rise by Tuesday.

Further south near the city of Los Angeles, the Tick fire has been burning since October 24, instigated by the seasonal dry and gusty Santa Ana winds.

With 1,500 hectares (3,700 acres) of land consumed, the Tick fire has proven deadly as human remains were found in burned-out homes in the suburbs.

Southern California is expected to get a bit of help with the weather as well on Tuesday, but winds are forecast to pick back up on Wednesday. 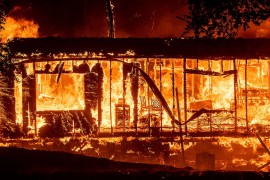 California utility PG&E admits it may have ignited wildfire

At least six homes were destroyed in California, no immediate injuries were reported. 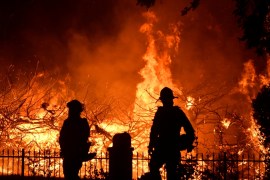 US: Deadly wildfire in Los Angeles burns with subdued fury