The United States will station additional forces in eastern Syria to protect oilfields in another policy shift that one former senior American official called a “shocking ignorance” of history and geography.

The planned reinforcement will take place in coordination with the Kurdish-led Syrian Democratic Forces (SDF) to prevent the oilfields from falling into the hands of Islamic State of Iraq and the Levant (ISIL or ISIS), a Pentagon statement said.

No details were provided on how many or what kind of forces would be sent, or whether decisions on those details have been made.

“The US is committed to reinforcing our position, in coordination with our SDF partners, in northeast Syria with additional military assets to prevent those oilfields from falling back into the hands of ISIS or other destabilising actors,” it added.

Earlier on Thursday, US President Donald Trump said on social media the US “will never let a reconstituted ISIS have those fields”.

The latest announcement, however, contradicts Trump’s controversial decision earlier this month to withdraw forces from northeast Syria, which paved the way for Turkey‘s military operation in the area.

In an interview with Al Jazeera, Joshua Landis, a Middle East expert at the University of Oklahoma, said the announcement was “emblematic of the chaos that has set in in the American foreign policy process”.

“It is in free-fall and the president is going back and forth,” Landis said. “This doesn’t really make much sense.”

The new deployment could mean US forces would be like “sitting ducks” being stationed in an area, in which the borders are guarded by Russian and Syrian troops, he added.

“Who is going to safeguard them? The Kurds will have nothing to do with America. They have now made a deal with the Assad government. The whole thing makes no sense.”

Marwan Kabalan from the Arab Center for Research told Al Jazeera the latest move to re-deploy forces to Syria reflects the contradictions in US foreign policy.

“US policy on Syria has been so inconsistent, it’s very difficult to predict whether the United States will stay or leave,” Kabalan said.

“The conflict is in Washington between President Trump and the foreign policy establishment, particularly the Pentagon. His eyes have always been on the upcoming election, he wants to boost support from his political base.”

“The president of the United States of America appears to be calling for a mass migration of Kurds to the desert where they can resettle atop a tiny oilfield. Shocking ignorance of history, geography, law, American values, human decency, and honour.”

Trump had justified his earlier decision to withdraw US forces from Syria, saying he sought to bring about 1,000 troops home and end American involvement there.

Trump said previously a “small number” of US troops would remain in Syria to secure the oilfields. An American official told the Washington Post earlier this week a proposal calls for 200 US troops to remain in the area.

News reports from Newsweek and US broadcaster Fox said a new deployment may include dozens of tanks and hundreds of soldiers.

The Turkish assault on northeastern Syria and the US-allied Kurdish forces has been halted after the US brokered a ceasefire.

Ankara also brokered a deal with Russia that saw the evacuation of Kurdish forces from a vast area along Syria’s border with Turkey.

How about the oil?

The Kurdish forces seized control of small oil fields in northeastern Hassakeh province after Syrian government troops pulled out of most of the Kurdish-majority regions in 2012 to fight rebels elsewhere.

After expelling ISIL from southeastern Syria in 2018, the Kurds seized control of the more profitable oil fields in Deir Az Zor province.

A quiet arrangement has existed between the Kurds and the Syrian government, whereby Damascus buys the surplus through middlemen in a profitable smuggling operation that has continued despite political differences. The Kurdish-led administration sells crude oil to private refiners, who use primitive homemade refineries to process fuel and diesel and sell it back to the administration.

The SDF currently sells Syria’s oil for about $30 per barrel.

The oil was expected to be a bargaining chip for the Kurds to negotiate a deal with the Syrian government, which unsuccessfully tried to reach the oil fields to retake them from ISIL. With Trump saying he plans to keep forces to secure the oil, it seems the oil will continue to be used for leverage – with Moscow and Damascus.

McGurk said on Monday: “Oil, like it or not, is owned by the Syrian state. Maybe there are new lawyers, but it was just illegal for an American company to go and seize and exploit these assets.”

Before the war, Syria produced about 350,000 barrels per day, exporting more than half of it. Most of that oil came from eastern Syria. Foreign companies, including Total, Shell, and Conoco, all left Syria after the war began more than eight years ago.

US Senator Lindsey Graham said after meeting with Trump on Thursday that he urged him to stay engaged in Syria.

“If you can find a way to secure the oil fields from Iran and ISIS, that’s in our national security interest,” Graham said. 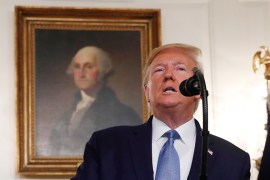 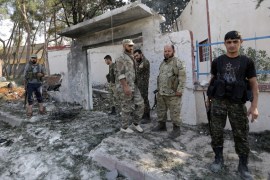 Russian, Syrian security forces aim to push Kurdish fighters back from the border as part of deal reached with Turkey. 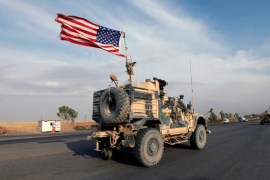 Donald Trump vows to get out of ‘blood-stained’ Middle East

In a special address from the White House, president says it is not the job of the US military to ‘police the world’.