Lebanon’s influential Hezbollah leader Hassan Nasrallah has warned that the fall of the government could lead to “chaos”, or “God forbid” civil war, calling on supporters to leave the streets as mass anti-establishment demonstrations entered their ninth day.

In a widespread outburst of anger against corruption and deteriorating living standards, people from across Lebanon’s sectarian and political divide  have been pouring onto the streets and blocking major roads to demand the resignation of the country’s power-sharing government.

In his anticipated televised speech on Friday, Nasrallah appeared to repeat his previous stance that while the government needed a new agenda and “new spirit”, a change would be a “a waste of time” and not the answer.

“We do not accept the fall of the presidency nor do we accept the government’s resignation and we do not accept, amid these conditions, holding early parliamentary elections,” Nasrallah said.

Instructing his supporters, who had gathered in public spaces to hear his address, to stay away from the demonstrations, Nasrallah argued that the demand coming from the streets had been hijacked in recent days.

“The data and information that we have obtained confirm that Lebanon has entered a stage of regional political targeting, and it is no longer just a popular movement,” he said, in comments that were likely to anger protesters.

The Hezbollah chief praised the government reforms announced on Monday at the behest of the protests, which have continued daily since last Thursday. He said the demonstrators have forced the government to approve a 2020 budget with no new taxes, as well as a raft of “unprecedented” reforms which included cutting in half the salaries of some current and former politicians, abolishing the Ministry of Information and other obsolete state institutions and reforming the listless state-run power sector.

However, protesters were duly disappointed with the reforms announced by Prime Minister Saad Hariri and have continued taking to the streets to call for doing away with Lebanon’s sectarian government.

Lebanon’s power-sharing system based on 18 recognised religious groups dates back to French colonial rule, allocating posts for each of the country’s communities and forming the basis of its major political parties.

Nasrallah warned that demands for a government resignation could cause a “vacuum”.

In his first address since the crisis began, President Michel Aoun on Thursday suggested a government reshuffle was a possibility, an idea that was welcomed by Hariri.

Hezbollah, which is aligned with Iran, has been largely resistant to any move that would alter the current status quo. The group and its allies are part of the government that came to power last year after months of negotiations. Hariri is not aligned with the group and is therefore considered a shield against the United States sanctioning Lebanon.

Shortly before Nasrallah spoke, groups of people chanting in solidarity with Hezbollah pushed into a peaceful demonstration at a square in central  Beirut.

The men shouted “we heed your call, Nasrallah,” in reference to the Hezbollah leader.

Following the scuffles, additional riot police with masks and batons were dispatched to the square to defuse the situation, which appeared to be growing more tense.

“Nasrallah is more honourable than all of them,” the supporters chanted about government leaders accused of corruption by the protesters. “Riad Salameh is a thief,” they shouted, in reference to the central bank governor.

Similar scuffles broke out on Thursday night at the same site in central Beirut.

The protests initially began in response to a proposed tax on Whatsapp calls. They are considered unique for both their geographic reach and support across sectarian lines.

The demonstrations have cut roadways, closed schools, and shut banks nationwide for days.

However, numbers have declined since Sunday when hundreds of thousands took over Beirut and other cities in the largest demonstrations in years, but they could grow again over the weekend. 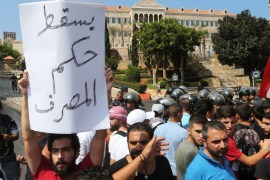 Lebanon needs to free its economy from international lenders

International lenders are as responsible for the growing inequality in Lebanon as the country’s own political elite. 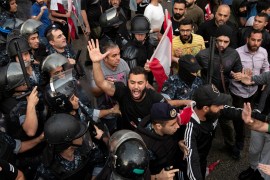