Richard McLachlan stands in the middle of a New York subway car and begins to shout at a dozen passengers mostly engrossed in their phones.

“Good afternoon everyone. I don’t want your money. But I would really like a few moments of your attention,” he bellows.

Some riders continue to look down, others stare nervously in the opposite direction, but at least one removes their headphones and listens.

“This is not about me,” continues the dapper, clean-shaven New Zealander aged 68. “It’s about all of us here in this climate emergency that we’re in.”

McLachlan is a member of Extinction Rebellion, an environmental action pressure group founded in the United Kingdom last year to draw attention to climate change.

Its activists have made headlines by disrupting London’s roads and underground trains, but in New York City McLachlan highlights the dangers of rising temperatures in a more novel way.

Since June, he has regularly given talks on the US financial capital’s subway, warning riders “we are sleepwalking into a catastrophe”.

“I know you don’t want me standing here shouting at you in the subway and I really don’t want to do it myself,” he told passengers on a Brooklyn-bound Q train.

“But I feel I have no choice. All of us need to wake up and not look away because this is so painful,” pleaded the grey-haired McLachlan, wearing a dandy red blazer.

The sexagenarian, long concerned about the planet, joined Extinction Rebellion’s New York outfit after watching campaigners in London shut down parts of the British capital in April.

A few weeks later, McLachlan – who has lived in New York for seven years – was travelling on the subway when he struck upon his idea.

“I looked at what people were doing and it was playing Candy Crush, or flicking through Tinder or Instagram, and I thought, I’m going to talk to them,” he said.

McLachlan went home and wrote a speech that he admits was “clunky”, but he plucked up the courage to read it aloud to a bunch of strangers on their daily commute.

“I got up there and I hyperventilated for quite a long time and then finally I started shouting and nobody told me to shut up. It was awkward but it was ok,” he recalled.

New Yorkers are used to hearing speeches when they travel underground, but they are usually from needy people seeking a dollar or two to get by.

After his first attempt, McLachlan – a retired public servant who has also worked as a sheep shearer, a jeweller and a truck driver – refined his speech.

It is personal. He said he is “incredibly sad” the lives of his five grandchildren are going to be “much more painful than mine or many of yours”.

And it is imploring. “Talk to your family, your friends, your lovers, your workmates. And if you’re like me, talk to complete strangers in the subway. It’s not that hard.”

McLachlan recites his two-minute soliloquy by heart. Afterwards, he hands out flyers. As he has become confident, his audience has become more receptive.

“It’s now not uncommon for people to applaud,” he said.

When AFP watched McLachlan between Canal Street in Manhattan and DeKalb Avenue in Brooklyn, no one clapped. But Anthony Urias removed his headphones and listened intently.

“It was very powerful,” said the 23-year-old psychology student, who later approached McLachlan for a chat.

But Israeli Frederick Gilit, 59, was less impressed. “I prefer to travel without this type of noise,” he said.

McLachlan estimated thousands of passengers have heard his talk. Some days he delivers it up to six times, but never in front of young children.

“Talking about the end of the world in front of a subway car full of five-year-olds just doesn’t feel comfortable,” he explained.

McLachlan is “deeply moved” when people thank him afterwards and said he has only been heckled three times, including once by an elderly man convinced an imminent nuclear holocaust meant worrying about the planet was futile.

The sprightly kiwi coaches others to follow in his footsteps too. He has taught three workshops helping climate-conscious activists write and deliver their own speeches for the subway.

His family is hugely supportive, but his wife has made him promise not to walk between subway cars, a practice that killed seven New Yorkers last year.

“She’s concerned about my welfare and I don’t have health insurance, so I’m not going to do it,” he said. 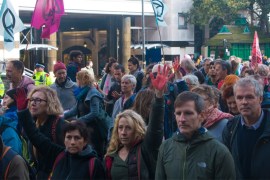 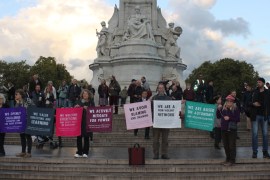 Meet the grandparents of Extinction Rebellion

Defying a London-wide ban on Extinction Rebellion protests, grandparents are calling for action on climate change. 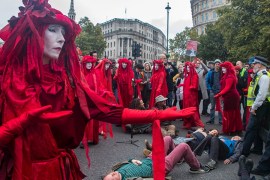