Islamabad, Pakistan – Pakistan and India have signed an agreement to open the Kartarpur corridor for Indian Sikh pilgrims to visit a religious holy site close to the border without the need for a visa, at a time when tensions remain high between the South Asian neighbours.

Pakistani foreign ministry official Muhammad Faisal and Indian home affairs official Subhas Das signed the agreement at the border close to the shrine at Kartarpur, located in the eastern Pakistani district of Narowal, on Thursday.

“You can call this [agreement] baby steps,” said Faisal after the signing, referring to the possibility of the nuclear-armed rivals resuming talks after a spike in tensions following India’s revocation of special constitutional status for the Indian-administered portion of the disputed region of Kashmir in August.

The corridor will link the Sri Kartarpur Sahib Gurdwara, the last resting place of the founder of Sikhism, with the Indian town of Dera Baba Nanak, about 6km (4 miles) away across the border.

Up to 5,000 pilgrims, who will have to register in advance with Pakistani and Indian authorities, will be able to use the corridor every day to visit the gurdwara – a Sikh place of worship – in Pakistan without the need for a visa, according to the agreement.

“The Kartarpur Sahib corridor shall be operational from dawn to dusk, seven days a week, throughout the year, except for closure on notified days or exigencies,” said the agreement.

The agreement has marked a rare continuing point of contact between the two governments this year, after a military conflict in February that saw India bomb Pakistani territory and Pakistan carried out retaliatory air attacks on targets in Indian-administered Kashmir.

India and Pakistan have fought two of their three wars since gaining independence over the disputed territory of Kashmir. In August, an Indian decision to revoke a special constitutional status for the Muslim-majority territory and an ensuing curfew and crackdown on dissent there prompted diplomatic outrage from Pakistan.

In November, Pakistani Prime Minister Imran Khan broke ground on the construction of the corridor at a ceremony attended by Indian federal ministers Harsimrat Kaur Badal and Hardeep Singh Puri.

In a statement, the Indian foreign ministry welcomed the signing of the agreement on Thursday but registered a protest against Pakistan levying $20 fee on pilgrims using the corridor, saying it was “not in consonance with the religious and spiritual sentiments of Indian pilgrims”.

Pakistan has defended the decision to impose the cost, citing the need to maintain the shrine and the facilities associated with the corridor.

“It was a very, very difficult and tough negotiation,” said Faisal. “Negotiating with India, because of the history that we have, is never easy. It is never simple.”

The corridor will be formally inaugurated by Pakistani Prime Minister Imran Khan on November 9, days before the 550th birth anniversary celebrations of Guru Nanak, the founder of Sikhism. India will hold a separate ceremony on its side of the border.

Nanak is said to have spent the final years of his life living in the small village of Kartarpur, farming and formalising the practices of a faith that is now followed by more than 25 million people around the globe.

India set to hold local elections in Kashmir amid boycott

With hundreds of leaders in jail, regional parties are boycotting the local body elections as the siege enters 80th day. 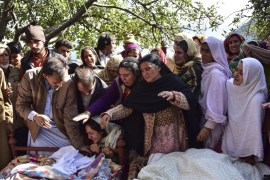 Several soldiers and civilians killed on both sides, as India and Pakistan blame one another for ‘unprovoked’ firing.