Lebanese President Michel Aoun has expressed willingness to meet protesters to find the best solution for the country’s worsening economic crisis, and suggested a government reshuffle was on the table.

The leaderless protests were triggered by new proposed taxes, and have escalated into a nationwide revolt against the country’s sectarian-based leaders whom the demonstrators accuse of corruption and mismanagement.

Aoun, in a televised address to the nation, called Hariri’s reform package “the first step to save Lebanon and remove the spectre of financial and economic collapse”.

He pledged to fight state corruption as demanded by hundreds of thousands of protesters, saying he would back new laws, including proposals for legislation that would lift bank secrecy and scrap immunity from presidents, ministers and legislators – moves that could pave the way for investigations.

Positioning himself as in solidarity with protest grievances, he said corruption had “eaten us to the bone”.

He pledged to exert every effort to implement radical reform, but also said that change can only come from within state institutions.

“I heard lots of calls for bringing down the regime,” he said. “The regime cannot be changed in the squares… this can only happen through state institutions.”

Both Hariri and Aoun have warned that a government resignation would lead to another vacuum, at a time the country desperately needs a government to enact reforms to help the struggling economy.

However, he did say there was “a need to review the current government”.

“My call to demonstrators: I am ready to meet your representatives that carry your concerns to listen to your specific demands. You will hear from us about our fears over financial collapse,” he said.

“Dialogue is always the best for salvation. I am waiting for you.”

Aoun’s comments are his first since the protests started on Thursday, but his speech was met with derision at demonstrations in the Lebanese capital, Beirut, and other cities.

Dozens of protesters listening to the speech on loudspeakers outside parliament in Beirut booed it and resumed their calls for fundamental reform.

Among them, Rabah Shahrour said he was fed up with hearing the same speeches for years.

“We were looking for a little hope from him,” he told the AFP news agency. “But sadly the president today spoke in generalities. We’ve being hearing these generalities for three years, and they haven’t led to anything.”

“The protesters don’t trust the people in power. They want a technocrat government, ministers who are not affiliated with the different political parties, who will work in the interests of Lebanon. They also want early elections – Aoun addressed that.

“He said if you want change, it has to go through constitutional means, change cannot come from the street. What he means is the next election, the ballot box. So clearly he didn’t meet the demands of the protesters but he is reaching out to protesters.”

Commenting on Aoun’s address, Lebanese journalist Jamal Ghosn told Al Jazeera that the president’s speech appeared to be a government tactic to try to “defuse the protests”.

“They [the Lebanese government] will try to break up the protest by any means possible and they don’t seem open to change,” he explained.

Ghosn added that unless the protesters continue to demonstrate, it was unlikely the government will address their concerns.

“If they [the protesters] have the staima to keep things going [for more than one week] then we might see things change.

“Another option would be for the protests to escalate and put more pressure [on the state],” he added. 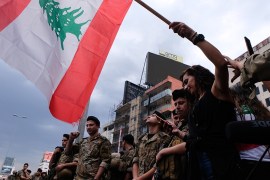 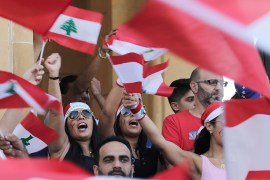 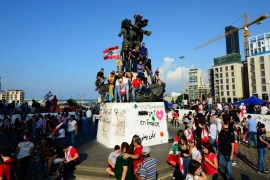 In Pictures: In Beirut, a revolution in unity over corruption

Much of central Beirut was at a standstill for almost a week after what started as protests over WhatsApp tax.