Prime Minister Boris Johnson has said he will ask Parliament to approve an early election, his third attempt to lead the United Kingdom to the polls amid a deadlock over its departure from the European Union.

Johnson wants an election on December 12. MPs are expected to vote on the proposal on Monday.

“The way to get Brexit done is, I think, to be reasonable to Parliament,” Johnson – who last month unlawfully suspended the legislature – said in a televised statement on Thursday.

But an election is not guaranteed. Johnson, who took office in late July, has already failed twice to win support from the necessary two-thirds of the House of Commons in order to hold a snap poll.

Jeremy Corbyn, the head of the opposition Labour party, said he would wait and see whether the EU agrees to delay the UK’s withdrawal from the bloc.

“Take no-deal off the table and we absolutely support a general election,” Corbyn said, adding that “if the EU will answer tomorrow then we’ll know tomorrow.”

Reporting from London, Al Jazeera’s Neave Barker said the prime minister was running out of options.

“Johnson is throwing down the gauntlet to the opposition – but he’s also doing it because he’s boxed in and is stuck,” he said.

“The EU is expected to come back on Friday and say what extension they’re going to offer. The fear is that if they offer a long extension, as is thought to be the preferred option of Germany and Ireland, lots of amendments will be added to the Brexit deal legislation and it could drag on and on, or include amendments which the government cannot support.

“By calling for an election now, Johnson is gambling big. If he can push Brexit through before Brits head to the polls, there will be an obvious electoral bonus. If, on the other hand, Britain is still an EU member when an election is held, he runs the risk that many weary eurosceptic voters will abandon the Conservatives in favour of the single-issue Brexit Party – which, we have seen in the European elections earlier this year, has the potential to hurt Johnson at the ballot box.”

Conceding defeat on the deadline

Johnson will now be hoping that opposition MPs will agree to his demand for an election, having forced him to concede defeat and climb down from his often-repeated pledge to leave the EU on October 31.

As many as 100 Labour MPs are reportedly considering defying party leader Jeremy Corbyn if he whips against a snap election – and backing the prime minister’s bid to head for the polls. The vote, if it goes ahead on Monday, is expected to be tight.

On Tuesday, the prime minister brought forward legislation to enshrine the Brexit deal he negotiated with the EU into law, but MPs rejected the government’s bid to spend just three days examining what many called the most consequential constitutional decision of their careers.

“If they genuinely want more time to study this excellent deal, they can have it, but they have to agree to a general election on December 12,” said Johnson, the leader of the Conservative Party, also known as the Tories. “That’s the way forward.”

Johnson said MPs could discuss the Brexit deal on Fridays and Saturdays – when the House of Commons does not usually sit – to get through as much of the legislation as possible before the election, but there would still be just two weeks to debate the wide-ranging ramifications posed by more than 100 pages of legislative text and another 400 pages of legal documentation.

Speaking to Al Jazeera on Wednesday, Jonathan Lis, deputy director of British think-tank Influence, said it was “simply too unpredictable to call” what would happen in a general election.

“It is possible that [opposition parties] Labour and the Liberal Democrats could collectively win more seats than the Conservatives – particularly if the Leave vote splits between the Tories and Brexit Party.”

If Parliament agrees to a December 12 election, it would be dissolved on November 6, a day after annual celebrations are held in the country in commemoration of the 1605 Gunpowder Plot – in which a group of religious radicals attempted to blow up the Houses of Parliament. 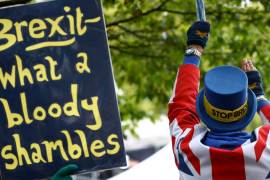 Brexit Britain braces for election while waiting for EU decision

Anxious wait drawing out in Britain’s corridors of power as EU leaders set to decide whether to grant UK Brexit delay. 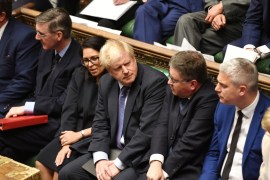