London, United Kingdom – British police have opened a murder investigation into the deaths of 39 people, including at least one teenager, found in the early hours of Wednesday morning inside a lorry at an industrial park in Grays, about 32km (20 miles) east of central London.

Police working to identify victims have so far declined to reveal any details about them, but believe the lorry had travelled from the port of Zeebrugge in Belgium into Purfleet on the River Thames in Essex, docking in the Thurrock area shortly after 12:30am local time on Wednesday (23:30 GMT on Tuesday).

“Purfleet is what we call a roll-on-roll-off port,” Mark Simmonds, head of policy and external affairs at British Ports, told Al Jazeera. The Calais-Dover route, in comparison, is an accompanied ferry route that sees drivers take their lorries through to the other side; in Purfleet the lorry reaches the UK unaccompanied.

“At unaccompanied ports, the driver will drop off the trailer at the port, the port will load the trailer onto the ship and a different driver will pick it up on the other side and drive it away,” Simmonds explained.

A 25-year-old man from Northern Ireland has been arrested on suspicion of murder, while the Bulgarian foreign ministry said the truck had been registered in Varna to a company owned by an Irish woman.

The tragedy has shone a spotlight on the issue of human trafficking and the increasing securitisation of the EU’s internal and external borders – just as the United Kingdom prepares to make its next move to leave the bloc.

As Belgium is in the European Union‘s single market and customs union, the only checks that take place are intelligence-led security controls carried out by the border force or the police. “It’s a small percentage of trailers that are checked,” Simmonds said.

It’s not the first time something like this has happened. On August 27, 2015, Austrian police found 71 bodies – including those of eight children – inside a truck along its A4 highway.

In the UK, the worst known tragedy of its kind took place in 2000, when 58 Chinese people were found in a container at Dover, Kent.

What law enforcement targets is not even the smuggler, it is the migrant

“There are no routes, this happens all the time,” Sanchez told Al Jazeera. “What law enforcement targets is not even the smuggler, it is the migrant.”

About 200 people each month attempt to enter the UK from France, increasingly crossing the English Channel in small boats.

“In order to claim asylum in the UK you must physically be here, unless you come via a resettlement programme. Other than this it has become almost impossible for people to come to the UK in a safe way,” said Clare Mosely of Care4Calais, a charity supporting migrants and refugees in Northern France and Belgium.

“As security increases, they just get caught in more and more danger,” Mosely told Al Jazeera. “As long as the response is only looking at security and not looking at it from a humanitarian perspective, more people are going to die.” 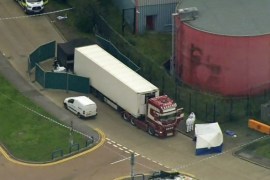 Driver of the lorry arrested as authorities report victims include 38 adults and one teenager. 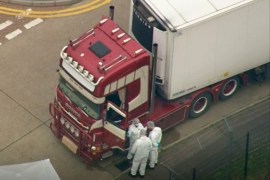