Singapore – Singaporeans got their first glimpse of a flying taxi on Tuesday, however fleeting, with a public demonstration of what its designers hope could become a new way to get around urban centres far above congested roads.

The air taxi’s maiden flight above Singapore‘s Marina Bay lasted about two minutes – a minute short of the advertised three-minute test run – perhaps because the thunder had begun to rumble. It was manned by a pilot, although future flights are expected to be fully autonomous.

“[This] is an important milestone for the introduction of urban air mobility, simply because we give people the image in their mind and the opportunity to see how the vehicle behaves in the air, and how quiet it is in full flight,” Volocopter CEO Florian Reuter told Al Jazeera after the test run.

Its aircraft can take off and land vertically, flown either automatically or by a pilot, with a beta design that can fly two people and their luggage for distances approaching 30 kilometres.

Volocopter said it hopes to cover high-traffic routes in major cities, such as between airports to city centres, at a speed of up to 110km per hour.

But the emerging technology is developing well ahead of government regulation and public acceptance, fuelling multiple questions over issues such as safety, cost and congestion in the skies.

“They will introduce a new level of noise to the city, anywhere near where they take off and land,” Walker told Al Jazeera.

“Unless their use is limited to the most rarefied elites, they will need a lot of space to take off and land. Their presence overhead in any numbers will have physical and emotional effects on the population. They will introduce entirely new kinds of accidents that make everyone fearful of the space above them,” he said.

Reuter said such concerns need to be hashed out among government regulators, transportation planners, and security experts.

German automotive multinational Daimler AG is among Volocopter’s investors, while others are also trying to develop air taxis.

Volocopter performed a public unmanned air taxi test flight in September 2017 in Dubai, which is also pursuing flying taxis as a way to alleviate traffic.

Singapore – where the trials are supported by the Ministry of Transport (MOT), the Civil Aviation Authority of Singapore (CAAS), and the Economic Development Board (EDB) – and Dubai are contenders as sites for the company’s first point-to-point flying taxi routes.

“By working closely with companies such as Volocopter, we hope to facilitate innovations for beneficial uses whilst ensuring aviation and public safety,” said Ho Yuen Sang, director of the aviation industry division at CAAS.

For some, helicopter taxis create the potential to relieve congested roads and help people move quickly around urban areas.

With UN estimates that 68 percent of the world population will live in cities by 2050, compared with 55 percent currently, air taxis can make use of building roofs and helicopter pads, and reduce strain on existing public transport networks.

A report by investment bank Citigroup on the prospects for air taxi services predicts they could be available in cities such as Singapore, Dubai and Shanghai from 2025, and will appeal to commuters willing to pay above the cost of ground-based taxi and ride-hailing services to avoid road congestion.

Transport for the wealthy?

The report puts the targeted cost of an air taxi ride at about US$6.04 per kilometre (US$3.75 per mile), cheaper than a limousine but double the cost of traditional modes of transport.

The report’s authors predict air taxi services will be more widely accepted if they are affordable to the general population rather than just to those with high incomes.

“We believe that it is quite important for the air taxi manufacturers, operators and all stakeholders to ensure that air taxis are not perceived as a ‘luxury toy for the rich’ or they will not garner public support for mass adoption,” Pavan Daswani, European Aerospace & Defence Analyst at Citi Research, told Al Jazeera.

One regulatory challenge would be to coordinate commercial air taxi routes within the city’s air traffic management system. Another consideration is where they would be able to take off and land.

In conjunction with the Singapore test flights, British company Skyports has built what it claims is the world’s first “vertiport” for electric aircraft in Singapore.

Its mobile landing pad was unveiled on Monday, a day before the Volocopter test flight over Singapore, as part of the Intelligent Transport Systems World Congress that is taking place this week.

At the opening of the conference on Monday, Singapore Transport Minister Khaw Boon Wan cautioned that autonomous vehicles and other futuristic technologies must be carefully planned and vetted.

“As a transport minister, I look beyond the technology element,” he said. “Politically what matters is that we have a transport system that is fast, safe, reliable and, very importantly, affordable for all people. It must contribute to their quality of life.” 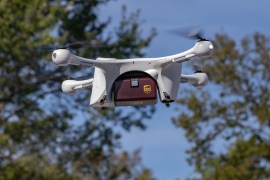 UPS drone airline gets OK from US government to launch

Ahead of its rivals, Flight Forward receives approval for package deliveries on university and hospital campuses. 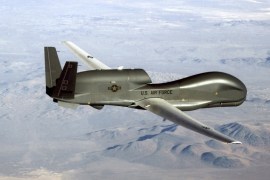 How are drones shaping the future of war?

The UK is reportedly considering using drones in the Gulf where tension has escalated in recent months. 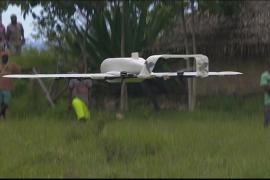 It is innovative, it is ambitious, but Vanuatu’s government wants to know if drone delivery of vaccines to remote locations is also practical and financially viable.