Chanting “revolution, revolution” and “the people demand the fall of the regime”, hundreds of thousands of people have rallied in cities across Lebanon, calling on the country’s ruling elite to resign over a dire economic crisis.

The protests – bringing together people from across sectarian and political divides – are the largest Lebanon has seen in years. They broke out on Thursday over the government’s now-abandoned plans to impose new taxes, including on WhatsApp voice calls, but have since turned into an outpouring of anger against a political class protesters accuse of corruption.

Those on the streets are now demanding an end to Lebanon’s sectarian form of government, which they say have entrenched leaders of the country’s various Christian and Muslim factions, fuelled networks of patronage and clientelism and stymied development.

Sectarianism has long been a feature of Lebanese politics, despite an effort to phase it out at the end of the country’s 1975-1990 civil war.

It was exactly 30 years ago, on October 22, 1988, that Christian and Muslim members of the Parliament of Lebanon signed a pact in Saudi Arabia‘s Taif, pledging to abolish sectarianism. The agreement, known as the Taif Accord, sought a political settlement to a bloody war – partly fuelled by sectarianism – that killed more than 100,000 people.

Three decades later, there is relative peace in Lebanon, but “politicians of all affiliations are deeply committed to political sectarianism, no matter what they preach or say, whether this commitment be out of greed, fear or to maintain the status quo,” said Karim Makdisi, associate professor of international politics at the American University of Beirut.

Sectarianism was formally enshrined in Lebanon in 1943 when the country declared independence from France. The founding National Pact gave Christians a majority in parliament and said the president must be a Maronite Christian, the prime minister a Sunni Muslim and the speaker of Parliament a Shia Muslim. Seats in the parliament were divided on a 6:5 ratio of Christians to Muslims.

The Taif Accord sought to redress that imbalance, by establishing parity between Muslims and Christians and shifting executive power away from the president to the prime minister.

However, it also described “abolishing political sectarianism” as a “fundamental national objective” and called for a phased plan to achieve the goal.

The landmark agreement called for a reliance on “capability and specialization in public jobs, the judiciary, the military, security, public, and joint institutions, and in the independent agencies … excluding the top-level jobs and equivalent jobs which shall be shared equally by Christians and Muslims without allocating any particular job to any sect.” There are 18 recognised sects in Lebanon.

However, Lebanon’s consociational institutions “at the outset cemented rather than ameliorated sectarian divisions”, wrote John Nagle and Mary-Alice Clancy in the Nationalism and Ethnic Politics journal in March. Partly due to low levels of trust, the country’s political elites “divided rather than shared power,” they wrote.

“Key ministerial and government posts are thus divvied among leaders, who use these positions as the basis for political clientelism within their own constituency and for their own personal financial gain,” they said, adding: “As part of the ‘pie-sharing’ system in which the spoils of state are divvied up, lucrative contracts for public works are awarded to private companies with close ties to sectarian elites. Sectarian leaders and their parties are able to advance rent-seeking through informal elite-level bargaining.”

Lara Saade, a constitutional lawyer based in Beirut, said the “Taif Accord succeeded in putting an end to the Lebanese war but has not achieved a sustainable peace and a political stability.”

Saade said “constitutional crises and political deadlocks have frequently jeopardised the viability of the Lebanese power-sharing [arrangement] in the years that followed [Taif],” echoing the frustrations expressed by many Lebanese protesters.

Such impasses included Lebanon’s inability to elect a president between May 2014 and October 2016 when the Lebanese Parliament failed to name a head of state despite 45 attempts. President Michel Aoun finally secured the role, ending the constitutional paralysis.

The political deadlock has resulted in severe government dysfunction, with the state unable to provide basic services, such as electricity and water, around the clock. The war in neighbouring Syria has added to Lebanon’s problems, with 1.5 million Syrian refugees taking shelter in the country and putting further strain on the public sector.

Still, despite the political dysfunction, many observers say the power-sharing agreement has helped Lebanon avoid another large scale war. But that has not stopped bouts of violence, Saade said, referring to Prime Minister Rafik Hariri’s assassination in 2005.

The group has refused to disarm despite UN calls to do so, and in 2008, it flexed its considerable military muscle when it battled rival Sunni groups in Beirut after Lebanon’s then-government moved to close its private telecommunications network. At least 81 people were killed.

Makdisi said Lebanon’s “system is broken” but “it is not clear when an effective national opposition can mobilise” to better the lives of ordinary Lebanese.

“Having said that, it is important for us all to think through what a better system would look like, and whether merely abolishing official sectarianism would actually improve the lives of ordinary people and focus resources on the public interest,” he added.

Saade, the constitutional lawyer, was hopeful of changes to Lebanon’s sectarian politics.

Speaking from downtown Beirut, she said the protesters “are even holding to account their own community leaders” and “are here to stay”.

“This is the first time that all the Lebanese citizens are all united around one issue – and that’s the resignation of the government,” she said. 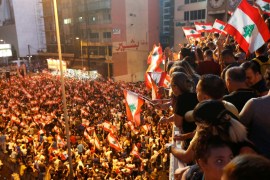 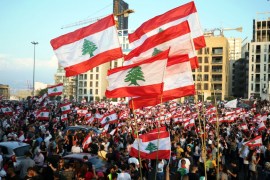 ‘The people are one’: Lebanese unite against political elite

Hundreds of thousands take to streets in the biggest protests in four days threatening the coalition government. 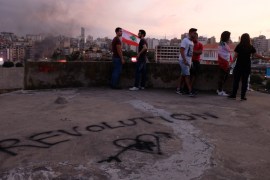 In heavily urbanised Beirut, public space is scarce and the amount of green space has steadily shrunk.