Nusaybin, southeast Turkey – Noor Dabhajli sat cross-legged on a mattress in her sister-in-law’s house, quietly accepting condolences from neighbours and friends following the death of her husband.

“I’ve lost my future,” the 20-year-old Syrian-Kurdish widow told Al Jazeera inside the house where she now lives with her two young children.

“Now I’m living only for my children, to make sure they have a better future.”

Her husband, 27-year-old Hassan Muhamed, was killed along with seven others on October 11 after three explosions hit the town of Nusaybin in the first days of Turkey‘s military operation in northeast Syria.

According to a statement from the office of Nusaybin’s governor at the time, the explosions were a result of a mortar and rocket attack by the Kurdish People’s Protection Units (YPG) that also wounded at least 35 others.

Ankara said the objectives of the operation, code-named Peace Spring, is to drive back the Kurdish-led Syrian Democratic Forces, populated by the YPG, 30 kilometres (18.6 miles) from its borders in order to establish a “safe zone” for Syrian refugees to return to.

Several officials in Nusaybin did not respond to Al Jazeera’s request for comment.

‘I can’t say anything’

Muhamed, a roof plasterer, fled the Syrian town of Malikiyya in 2013, as fighting between various armed groups over the resource-rich province of Hassakeh worsened.

Different armed groups such as the YPG, the Islamic State of Iraq and the Levant (ISIL, or ISIS) as well as al-Qaeda‘s affiliate known then as Jabhat al-Nusra, clashed for control of the area.

By then, Syrian government forces had ceded vast amounts of territory to the YPG.

Dabhajli joined her husband a few months later, following the birth of their daughter Cigdem.

According to Dabhajli, Nusaybin’s governor and mufti, the magistrate of the Mardin province, and Turkish military officials all attended Muhamed’s funeral.

“The social services have sent my children’s papers to Ankara to apply for their permanent residency and to ensure they receive a monthly allowance,” she said.

Abu Ahmad, Muhamed’s brother-in-law, was reluctant to voice his opinion on the Turkish operation.

“We have nothing to do with politics,” he said. “We’ve been neutral for years. We just want to live.

“Turkey is the country that welcomed us, that is teaching our children in their schools. I have to respect the country.”

He also refused to discuss the SDF.

“I can’t speak out against them, I still have family there,” he said, although he did concede that had he remained in Qamishli, where he moved to after Malikiyya, he would have been forcibly conscripted to the SDF.

Two streets away, 57-year-old Jaweeda al-Hamoud sat in the courtyard of her house, dressed in all-black.

The same explosions that killed Muhamed also killed Hamoud’s youngest child and only son that lived with her, 18-year-old Dara Ali.

“I’ve worked hard well into my age cleaning houses just to provide for my son,” she cried. “Now he’s gone.”

Originally from Qamishli, she fled to Nusaybin in 2013. She does not want to return to Syria.

“I want to stay near my son’s grave,” she said.

When asked who she blames for her son’s death, she starts shaking her head.

“I can’t say anything,” she said. “I can’t do anything. I hope everyone can resolve their issues so the war can end. We’ve suffered for so long.”

This is due to one outcome by the 2015-2016 campaign by Turkish forces against Kurdish armed groups, specifically the Kurdistan Workers’ Party (PKK), which Ankara considers a terrorist group, in the southeast of the country.

The military confrontation started after a bombing in Suruc in July 2015, allegedly perpetrated by ISIL, killed 34 people, mostly Kurds.

The PKK blamed Ankara for the attack, saying it has “supported and cultivated” ISIL against the Kurds. The Turkey-PKK 2013 ceasefire, called for by the PKK’s jailed leader Abdullah Ocalan, quickly deteriorated.

The reluctance to speak about the military operation, either in support of or against, is part of what Rosa Burc, a PhD researcher at the Center on Social Movement Studies in Florence, Italy, calls “a tragedy” of the Syrian-Kurdish people.

“To criticise the Turkish operation would mean risking their status as refugees and their lives as well as facing possible arrests,” Burc said.

“It is not an easy situation for these refugees in Turkey right now who are from a region that Turkey has declared is a terrorist corridor and the number one enemy of the state.”

Burc said that despite Turkey giving refuge to Kurds fleeing the Syrian war, the fact that Ankara has launched a military offensive in Kurdish-populated areas in Syria shows the extent to which Kurds are truly “stateless”.

“Not in a nation-state way, but in a way that none of these countries inhabit [Iraq, Iran, Syria, Turkey] provide fundamental human rights and protection to Kurdish people.”

Burc says that after the 2015-2016 conflict between Turkish forces and the PKK, the southeast region has been “precarious in terms of security and safety, but more so even in the restrictedness of freedom of movement, freedom of speech, freedom of public gathering and protesting”.

“The entire region has been even more securitised after the military operations in 2015-16 which creates a very difficult situation for civilians living in the area,” she said.

For Abu Ahmad, people should be tried for the crimes they commit and not according to their ethnicity.

“We are all Syrians, and we want the war to end,” he said. “We fled the war only to lose Muhamed here. Enough is enough.” 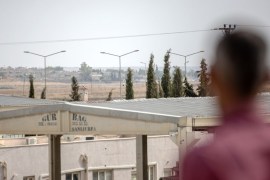 How long will Turkey remain in northeast Syria? 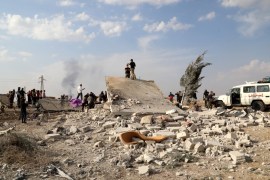