Israeli Prime Minister Benjamin Netanyahu has announced he is giving up his effort to form a new government after failing to form a coalition following an inconclusive parliamentary election last month.

But on Monday the 70-year-old said he had come up short, announcing in a video posted on his official Facebook page that despite working “tirelessly” to establish an administration with Gantz he had been repeatedly rebuffed.

“During the past few weeks, I made every effort to bring Benny Gantz to the negotiating table. Every effort to establish a broad national unity government, every effort to prevent another election,” Netanyahu said. “To my regret, time after time he declined. He simply refused.”

Netanyahu said he was consequently returning the “mandate” to President Reuven Rivlin.

Rivlin gave Netanyahu the first opportunity to form a government because the Likud-led bloc of right-wing and religious parties won the most seats in Israel‘s 120-seat parliament in the September 17 ballot, taking 55, one more than the Blue and White-headed bloc. As individual parties, Likud won 32 seats, while Blue and White took 33.

Following Netanyahu’s announcement, Rivlin said he will now hold consultations with the various political parties to tell them he intends to task Gantz with the job of putting together a new government.

Blue and White, meanwhile, said in a statement it was determined to “form the liberal unity government, led by Benny Gantz, that the people of Israel voted for”.

“The time of spin is over, and it is now time for action,” the party said.

Gantz will now have a 28-day window to try and form a government. If he fails, Israel could be forced into the unprecedented scenario of a third election in less than a year.

Al Jazeera’s Harry Fawcett, reporting from West Jerusalem, said Blue and White had previously made it clear they would enter government with Likud, but not while Netanyahu was head of the party.

“Gantz’s party say they are not willing to sit in government with someone who, as Netanyahu is, is under the prospect of indictment on three separate corruption charges,” Fawcett said, adding there was likely to be a “bumpy few weeks and months” ahead.

Israel’s attorney general is set to decide in the coming weeks on whether to indict Netanyahu in the three cases.

Netanyahu, for his part, says he is a victim of a political witch-hunt and as prime minister would be under no legal obligation to resign if formal charges were filed. 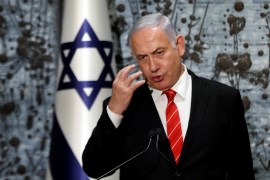 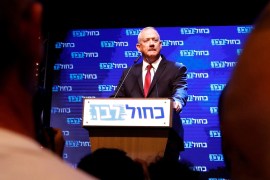 Palestinian politicians will not gain anything from supporting a general accused of war crimes to become prime minister.