Toronto, Canada – Canadians are heading to the polls on Monday to vote in a tight race seen as a test to the leadership of Prime Minister Justin Trudeau.

Polling stations on the eastern side of the country started opening at 8:30am (11:30GMT).

After winning a strong majority in 2015, Trudeau is hoping for a second term but polling indicates his Liberal Party and Andrew Scheer’s Conservatives are neck-and-neck.

In the last 40 days, party leaders crisscrossed the country talking to voters, focusing on regions where support could swing in their favour – especially Atlantic Canada, Quebec, Ontario and British Columbia. In the final 24 hours, party leaders flocked to Vancouver to make their final pitches.

Visiting a battleground riding in Vancouver on Sunday, Trudeau told residents to get out and vote.

“It’s always important for people to get out and vote. We’ve got a great democracy and we need to make sure we are participating in it,” he said.

On Monday, he cast his ballot in his Papineau riding in Montreal, a district he has held since 2008. His son Hadrian helped him put his ballot in the box. Elections Canada encourages people to bring their kids to the polling station to get them interested in voting.

Meanwhile, Andrew Scheer told voters: “We want Canadians to send Conservative MPs to Ottawa so we can start the work to undo the damage that Justin Trudeau has caused, to return to balanced budgets, to lower taxes and help Canadians get ahead.”

Making three stops in Vancouver on Sunday, NDP leader Jagmeet Singh told a Canadian Press reporter his party has sent “a really clear message to Canadians that they can choose to vote for hope, that they don’t have to fall into the discussion or argument about who is worse for Canada and we are giving Canadians a real option here.”

He cast his ballot on Monday in his Burnaby South riding.

Canadian election results come in like a wave, surging east to west. Most elections are decided when it hits Ontario, the province with the most seats in the House of Commons.

The Liberals swept Toronto in 2015, winning every district in what was dubbed the “red tide”. This election, the Conservatives are closing in on Liberal territory in the suburbs, while the NDP is fighting Liberal candidates in the downtown area.

In districts known as “bellwether ridings”, results can predict how the election will play out more broadly.

The downtown Toronto Davenport riding is known as a bellwether district. It was a Liberal stronghold until Andrew Cash won it in 2011 amid the NDP’s “orange crush”. Liberal MP Julie Dzerowicz took it back in 2015 by a close margin of 1,400 votes.

The two are going head to head again for the parliament seat. The results could indicate what happens for the Liberals and NDP nationally. So far, polls indicate that Davenport is a toss-up.

Cash, pointing to people honking their car horns and expressing excitement to meet him, said: “That wasn’t quite happening at the end of the last election.” He told Al Jazeera that people voted for change four years ago, but were disappointed by Trudeau.

He said Singh, on the other hand, is genuine and relatable.

“We’ve got a cacophony of message-box leaders. …He maybe used a teleprompter once in this whole campaign,” he added.

Dzerowicz, taking a quick break from last-minute door knocking, told Al Jazeera that she could feel the lack of enthusiasm this election.

“I think it’s just where we are in our cycle; that was the first term, now we’re in our second term,” she said, adding that affordable housing and climate change have been among the chief concerns of voters she has spoken to.

Her party leader, Trudeau, has been rocked by a number of scandals in the lead-up to the election, including revelations he wore brownface and blackface at separate events before getting into politics.

Natalie Classon, 33, lives in Davenport and voted NDP at an advance poll. She also voted NDP in 2015. She said the most important issue for her this election is the environment.

“I want a better future for everyone, for future generations like my siblings’ kids, that’s super important to me,” she said.

Marta, 34, who didn’t want her last name published, said she voted Liberal in an advance poll.

Her newborn motivated her to vote for the first time.

“I feel a lot more invested in democracy,” she said. “It sounds very philosophical, but all of a sudden I started caring about my tax dollars, in terms of schools, healthcare and programmes for youth.”

She is hoping for a Liberal majority on Monday night, although polling data suggests that’s unlikely to happen. 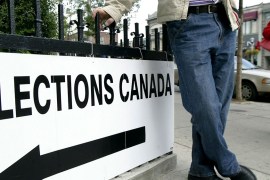 Canada election: What you should know

What are the key issues? How are parties expected to perform? Here are eight things to know before Monday’s election. 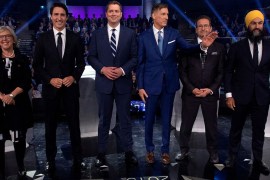 Canada: ‘An election about nothing’ leaves many uninspired

Analysts say the lead-up to October 21 election has failed to capture the attention of voters.