Hong Kong police have fired tear gas at protesters as thousands staged a march through the Kowloon district, ignoring a police ban on the rally and setting up barricades.

Police inside the Tsim Sha Tsui police station fired volleys of tear gas and used a loudspeaker on Sunday to call on protesters in the street to disperse.

Protest leaders at the front of the procession carried a black banner with the slogan, “Five main demands, not one less” as they pressed their calls for accountability and political rights.

The protesters tore up paving stones from the pavement and scattered them on the road, commandeered plastic safety barriers and unscrewed metal railings to form makeshift roadblocks.

Hong Kong has been battered by months of often massive and violent protests over concerns Beijing is tightening its grip on the city, the worst political crisis since Britain handed the city back to China in 1997.

The crisis in the Chinese-ruled city also poses the biggest popular challenge to China’s President Xi Jinping since he took power. Beijing has denied eroding Hong Kong’s freedoms and Xi has vowed to crush any attempt to “split” China.

The unrest was sparked by a bill that would have allowed the extradition of accused individuals to mainland China for trial in Communist Party-controlled courts. It has since widened into a pro-democracy movement.

Matthew Lee, a university student, said he was determined to keep protesting even after five months.

“I can see some people want to give up but I don’t want to do this because Hong Kong is my home, we want to protect this place, protect Hong Kong,” he said.

Many of the movement’s supporters wore masks in defiance of a recently introduced ban on face coverings at public gatherings and volunteers handed more out to the crowd.

Organisers said they wanted to use their right to protest, as guaranteed by the city’s constitution, despite the risk of arrest.

“We’re not afraid of being arrested. What I’m most scared of is everyone giving up on our principles.”

The group has organised some of the movement’s biggest protest marches. One of its leaders, Jimmy Sham, was attacked on Wednesday by assailants wielding hammers.

On Saturday, police arrested a 22-year-old man on suspicion of stabbing a teenage activist distributing leaflets near a Lennon Wall plastered with pro-democracy messages.

Local media images showed the young activist had been severely injured in the afternoon incident in northeastern Tai Po district.

A witness told local broadcaster RTHK the assailant shouted afterwards that Hong Kong is “a part of China” and other pro-Beijing messages. 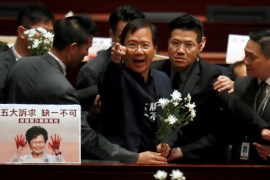 Chaos erupted for second day as chief executive’s critics were dragged one by one from the legislative chamber. 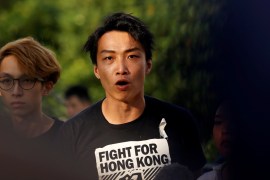