Prime Minister Boris Johnson has the numbers to pass his Brexit deal through parliament this month, key British government ministers said on Sunday despite a humiliating defeat in the House of Commons on Saturday.

British Foreign Secretary Dominic Raab said he was confident the United Kingdom would leave the European Union on October 31. He also said the UK Parliament could not muzzle the prime minister and that many people in the EU were deeply uncomfortable about further delay.

“He has got that deal. We seem to have the numbers in the House of Commons. Why hasn’t Parliament pushed this through? That is what we are going to do next week,” he told the BBC.

Conservative Minister and Chancellor of the Duchy of Lancaster Michael Gove echoed Raab’s enthusiasm, asserting that, despite UK parliamentarians forcing Johnson to send a letter on Saturday to the EU requesting a delay, Britain will leave the EU by October 31.

“We are going to leave by October 31, we have the means and the ability to do so,” Gove told Sky News on Sunday.

Meanwhile, the opposition Labour Party’s Brexit spokesman has re-emphasised his party’s support for a second referendum on Britain’s divorce deal with the EU.

Keir Starmer told the BBC on Sunday that “whatever deal gets through, it should be subject to a referendum”.

Starmer said what Labour is seeking now is that “this deal in particular but any deal is put up against remain in a referendum.”

British legislator Oliver Letwin, whose amendment forced Johnson to request the delay, said on Sunday that he believed the UK prime minister could probably get his Brexit deal over the line.

Letwin said he would propose no more amendments this week.

Letwin, who was kicked out of Johnson’s Conservatives Party over his attempts to block a no-deal exit, said with the support of legislators like him, he hoped the government could get the deal across the line, adding: “I think we probably will.”

Starmer said on Sunday that his party would put forward amendments to Johnson’s Brexit deal legislation, particularly aimed at closing the “trap door” to no-deal Brexit at the end of a transition period in December 2020.

The EU’s chief Brexit negotiator, Michel Barnier, met with EU ambassadors on Sunday to discuss the consequences of the letter sent by the prime minister asking for a Brexit extension.

Johnson sent an unsigned letter to the EU late on Saturday seeking a delay to Britain’s impending October 31 departure from the bloc, as required by British law. But he followed it with a signed letter indicating that he does not favour another Brexit extension.

Asked after the meeting in Brussels whether EU leaders would be open to granting a new Brexit delay, Barnier just said EU Council President Donald Tusk would hold consultations “in the next days.”

Barnier said it was “a very short and normal meeting” to “launch the next steps of the EU ratification of the agreement”.

“We’re looking for more clarity towards the end of the week, hoping that by that time we will also see how things develop in London,” one senior EU diplomat said. 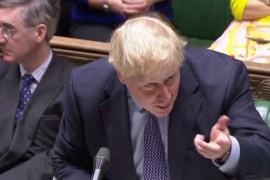 Prime Minister sends EU request to delay Brexit after losing vote in the House of Commons. 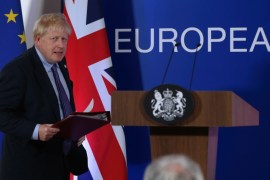 Has Britain’s prime minister sealed the deal on Brexit?