A struggle between Peru‘s president and congress over who will govern the country threatened to become a lengthy and destabilising legal battle as each side dug in on Tuesday amid the deepest constitutional crisis in nearly three decades.

Defiant opposition politicians then voted to suspend him from office and moved to replace him with a vice president who had recently broken rank.

But Mercedes Araoz late on Tuesday resigned from the post proclaimed for her by legislators, and urged Vizcarra to hold elections “in the shortest term for the good of the country”.

Earlier in the day, the military and governors stood by Vizcarra, while several private business coalitions said they would back Araoz.

There was no immediate comment from the two sides in the confrontation on Araoz’s decision.

The 35-member Organization of American States urged Peru’s Constitutional Tribunal to weigh in on the feud as both sides accused the other of abusing power and jeopardising the nation’s stability.

“It seems we are facing a protracted political crisis, with the dispute potentially ending up before courts,” said Maria Luisa Puig, an analyst for the Eurasia Group consultancy.

Peruvians appeared overwhelmingly in favour of Vizcarra’s decision, but the events nonetheless could risk social unrest.

Vizcarra is likely to continue governing as president while any challenge from the opposition works its way through court. He has already called for new legislative elections in early 2020.

But if congress should prevail politicians would be entitled to stay in their posts until 2021, calling off Vizcarra’s elections and probably moving to impeach him, all acts that could antagonise an already angry public with little to no faith in elected leaders.

Teresa Tintaya was among a handful of protesters outside congress on Tuesday yelling phrases like, “Garbage congress, the people hate you!”

“President Vizcarra is a brave man,” she said.

Even before the turmoil, the nation was already on shaky political ground.

Nearly every living former president has been ensnared in the mammoth Odebrecht corruption scandal, in which the Brazilian construction heavyweight admitted to funnelling money to politicians around Latin America in exchange for lucrative public works contracts.

Lower-ranking but still powerful judges, legislators and businessmen have been caught on wiretaps negotiating backroom deals, leading many Peruvians to conclude that no branch of their country’s turbulent government can be trusted.

Vizcarra rose to power last year after President Pedro Pablo Kuczynski resigned over the Odebrecht probe, and made defeating corruption his signature drive.

He has succeeded where his predecessor failed in gaining the public’s support, but has clashed repeatedly with congress headed by opposition leader Keiko Fujimori’s party.

Under Peru’s law, Vizcarra is entitled to dissolve congress if it rejects two votes of confidence in his administration.

Whether or not two such votes have taken place is at the crux of the conflict between the executive and legislative branches.

Vizcarra contends a rejection vote during Kuczynski’s administration counts as the first because he is continuing his predecessor’s mandate.

He argues that the second happened on Monday when politicians proceeded with a vote to select new Constitutional Tribunal magistrates, defying his warning that he would interpret it as a vote against confidence.

Almost simultaneously, opposition politicians rushed to approve a vote of confidence that they say in effect inhibits Vizcarra from closing congress. 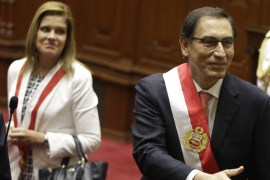 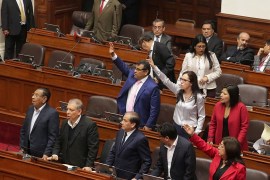 The power struggle could trigger unrest in a country that has seen increased political volatility in recent years.