North Korea fired at least one missile off its east coast on Wednesday, possibly from a submarine, the South Korean military said, a day after announcing it would resume stalled talks over its nuclear programme with the United States.

The National Security Council in Seoul expressed “strong concern” over the launch of what it said may have been a submarine-launched ballistic missile (SLBM), according to a statement issued by the presidential Blue House.

If confirmed, it would be the first time North Korea has launched an undersea missile in three years.

South Korea‘s military said it picked up a missile that flew 450 kilometres (280 miles) and reached an altitude of 910 kilometres (565 miles), and that it was believed to be a “Pukguksong-class” type missile that North Korea launched previously from an underwater test platform in 2016.

Japan lodged an immediate protest, saying the missile landed inside Japan’s economic exclusive zone – the first time a North Korean missile has landed that close to Japan since November 2017. The EEZ covers waters as far as 370 kilometres (230 miles) from the coast.

Defence Minister Taro Kono called the launch “a serious threat to Japanese national security” adding that it was an “extremely problematic and dangerous act” for the safety of vessels and aircraft. Kono declined to say whether the projectile was a submarine-launched missile.

“We will continue to cooperate with the US and the international community and do the utmost to maintain and protect the safety of the people as we stay on alert,” Abe said.

The United States called on Pyongyang to “refrain from provocations” and remain committed to nuclear negotiations after North Korea fired a ballistic missile off its east coast.

“We call on (North Korea) to refrain from provocations, abide by their obligations under UN Security Council Resolutions, and remain engaged in substantive and sustained negotiations to do their part to ensure peace and stability on the Korean Peninsula and achieve denuclearisation,” a state department spokeswoman said on Wednesday.

North Korea had been developing SLBM technology before it suspended long-range missile and nuclear tests and began talks with the US that led eventually to the first summit between Kim and Trump in Singapore in June 2018.

The launch is the ninth since US President Donald Trump and North Korean leader Kim Jong Un met at the heavily-guarded Demilitarised Zone between the two Koreas in June, with talks over the North’s nuclear and missile programmes  stalled since the second summit between the two men collapsed in February.

It came just a day after Pyongyang announced it had agreed with the US to hold working-level talks on Saturday potentially breaking months of stalemate.

“We are aware of reports of a possible North Korean missile launch. We are continuing to monitor the situation and consulting closely with our allies in the region,” a senior official in the US administration, who spoke on condition of anonymity, told Reuters.

Trump has played down North Korea’s recent series of short-range launches, saying in September the US and North Korea “didn’t have an agreement on short-range missiles” and that many countries test such weapons.

Hours before the launch, North Korea had announced a return to working-level talks. The previous missile launch – on September 10 – also took place after the North had expressed a willingness to talk.

“North Korea has recycled its carrot-and-stick strategy against the US multiple times with great success,” said Lee Sung-yoon, Professor of Korean Studies at The Fletcher School at Tufts University.

She expressed optimism over the outcome of the meeting but did not say where the talks would take place.

“It is my expectation that the working-level negotiations would accelerate the positive development of the DPRK-US relations,” Choe said in the statement, using an abbreviation for North Korea’s formal name, the Democratic People’s Republic of Korea.

State Department spokeswoman Morgan Ortagus, who is travelling with Secretary of State Mike Pompeo in Rome, confirmed talks within the next week.

Mintaro Oba, a former diplomat in the State Department, told Al Jazeera that while North Korea was “pushing boundaries” with the launches, it was betting that would not jeopardise negotiations.

“The North Korean calculation is that the US is very much invested in these talks and therefore will not put up much of a strong response to these launches,” Oba said. 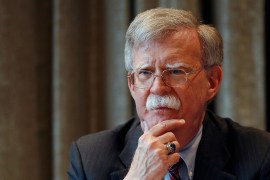 In first speech since he was forced out, John Bolton says North Korea has no intention to give up nuclear weapons.