British Prime Minister Boris Johnson has been handed a major defeat in the United Kingdom‘s parliament over his plan to exit the European Union by the end of this month.

MPs on Saturday voted 322 to 306 in favour of a proposal which prevents Johnson’s Brexit deal being approved until parliament has signed off on all requisite withdrawal legislation, forcing him to shelve a planned vote on his freshly-brokered withdrawal agreement.

Under separate legislation passed last month, Johnson is now compelled to ask the EU for a Brexit delay until the end of January 2020.

The UK is currently scheduled to depart the bloc on October 31, in less than two weeks time.

European Council President Donald Tusk said he has spoken to Boris Johnson and was awaiting a letter with a request to delay Brexit again.

“Waiting for the letter,” Tusk said on Twitter after Johnson lost a crucial vote on Brexit in the British parliament. “I just talked to PM Boris Johnson about the situation after the vote in the House of Commons.”

Polish Prime Minister Mateusz Morawiecki said his country does not see the vote by British legislators as a rejection of the Brexit deal but rather as a delay.

“Poland welcomes today’s @HouseofCommons vote not as a rejection of the Withdrawal Agreement but as postponement of its acceptance,” Morawiecki said in a post on Twitter.

“We will support a positive approach on EU level to @BorisJohnson government proposal. Avoiding chaotic, no-deal #brexit should be our top priority,” he added.

Poland welcomes today's @HouseofCommons vote not as a rejection of the Withdrawal Agreement but as postponement of its acceptance. We will support a positive approach on EU level to @BorisJohnson government proposal. Avoiding chaotic, no-deal #brexit should be our top priority.

“The president held a conversation with the British prime minister and shared his view for the need for a swift clarification,” an official at the French presidency told the Reuters news agency.

“He signalled a delay would be in no one’s interest,” the official added.

Ireland’s Prime Minister Leo Varadkar said that Britain had not yet made a request to delay Brexit, after Johnson lost a vote in the House of Commons which means that he is obliged to ask for an extension.

“The EU & UK agreed a Withdrawal Agreement on Thursday that defends Ireland’s interests. The Commons voted today to defer a decision on whether or not to ratify that agreement. To date, no request for an extension has been made by the UK Government,” Varadkar said in a post on Twitter.

The EU & UK agreed a Withdrawal Agreement on Thursday that defends Ireland’s interests. The Commons voted today to defer a decision on whether or not to ratify that agreement. To date, no request for an extension has been made by the UK Government.

Gov’t to push for Brexit vote on Monday

Leader of the House of Commons Jacob Rees-Mogg said the government planned to put Johnson’s Brexit deal to a debate and vote on Monday.

It is unclear whether that would be allowed under House of Commons rules against holding repeated votes on the same question.

House of Commons Speaker John Bercow said he would make a ruling over the issue on Monday.

EU urges UK to set out ‘next steps’

Mina Andreeva, a spokeswoman for the European Commission, said the EU’s executive branch had “taken note” of Saturday’s vote in the British parliament.

“It will be for the UK government to inform us about the next steps as soon as possible,” she said in a post on Twitter.

🇪🇺🇬🇧 @EU_Commission takes note of the vote in the House of Commons today on the so-called #Letwin Amendment meaning that the #WithdrawalAgreement itself was not put to vote today. It will be for the UK government to inform us about the next steps as soon as possible.

Had Johnson’s deal been approved by British MPs, the withdrawal agreement would have proceeded to the EU parliament for ratification by the legislature’s own members.

Johnson said he was “undaunted” by the MPs’ decision to vote in favour of former Conservative MP Oliver Letwin’s amendment and promised to press ahead to try and leave the EU by October 31.

Johnson said he still believed he can command “overwhelming” support for his new Brexit divorce plan and will introduce the required legislation to make that happen.

“I will not negotiate a delay with the EU and neither does the law compel me to do so,” he added.

“I will tell our friends and colleagues in the EU exactly what I have told everyone else in the last 88 days that I have served as prime minister: that further delay would be bad for this country, bad for the European Union and bad for democracy.”

MPs voted 322 to 306 in favour of the amendment brought forward by Letwin and backed by a cross-party alliance of legislators.

The amendment in effect prevents Johnson’s Brexit deal being approved until parliament has signed off on all requisite withdrawal legislation, ensuring the UK can not exit the bloc without a deal on October 31.

Unless Johnson has approved a deal by the end of Saturday, he is obliged by law to ask the EU for a Brexit delay until the end of January 2020. If the prime minister can get all of the necessary legislation through parliament in time, however, he could still achieve a withdrawal by the end of this month.

Letwin said the purpose of his amendment was to prevent the UK from departing the EU on October 31 without a deal in the event requisite Brexit legislation is not passed by then.

Letwin told parliament he would support Johnson’s deal, but said it was not responsible for Johnson to threaten a choice between his Brexit deal or exiting the bloc with no withdrawal agreement.

“The prime minister has a strategy … he wants to be able to say to any waverers ‘it is my deal or no deal, vote for the implementing legislation or we crash out’,” he said.

“We cannot be sure that such a threat from the prime minister would work. I, despite my support for the prime minister’s deal, do not believe that it is responsible to put the nation at risk by making that threat.”

Labour to back Letwin amendment

Britain’s main opposition Labour Party will support Letwin’s proposal to withhold support for Johnson’s Brexit deal until the formal ratification legislation has been passed by parliament.

A Labour spokeswoman said the party was backing the amendment to “stop Boris Johnson from sneaking through a no deal crash out … and to stop a blackmail vote between his sell out deal and no deal”, Reuters reported.

The battle over Brexit spilled onto the streets of London, where hundreds of thousands of people gathered to demand a new referendum on the UK’s departure from the EU.

Protesters waving EU flags and carrying signs calling for Brexit to be halted marched through the centre of the capital to parliament.

“I fervently believe that we should remain in the EU,” Bruce Nicole, one of those demonstrating, told The Associated Press news agency. “I am British but I am also European. I don’t believe the current deal offers any benefits at all.”

The British government is focused on making sure legislators do not back Letwin’s proposal, Reuters quoted the prime minister’s spokesperson as saying.

If Letwin’s amendment is passed, parliament will not get to vote on Saturday on whether to approve Johnson’s withdrawal agreement.

“We want Members of Parliament to have the opportunity to vote on the deal,” the spokesman said. “Our focus is on making sure that the Letwin amendment isn’t passed.”

Al Jazeera’s Paul Brennan, reporting from Westminster, said Johnson’s “centre of operations” had confirmed the government will pull the vote on his deal if the amendment to the motion put forward by Letwin passes.

The amendment, if passed, would force Johnson to request an extension to Brexit by the end of Saturday. It is backed by a cross-party alliance of opposition MPs.

“This amendment would force a delay until legislation can be passed actually implementing the deal,” Brennan said.

“It’s a rather technical amendment, but it’s designed to prevent the government pulling any fast ones with MPs and going accidentally-on-purpose to a no-deal Brexit on October 31,” he added.

“This deal would be a disaster for working people,” he said, adding it was “even worse” than the one it replaces, which was negotiated by Johnson’s predecessor, Theresa May, and rejected three times by parliament.

“Voting for a deal today won’t end Brexit. It won’t deliver certainty and the people should have the final say,” Corbyn said.

He had earlier reiterated that Labour MPs would vote against the revised withdrawal agreement in a post on Twitter.

Boris Johnson's sell-out deal risks triggering a race to the bottom on rights and protections: putting food safety at risk, cutting environmental standards and workers’ rights, and opening up our NHS to a takeover by US corporations.

Today, @UKLabour will reject it.

Time to ‘move on’: Johnson

Opening the session with a statement urging MPs to back his deal, Johnson said it was time to “move on and build a new relationship” with Europe.

He added that the new withdrawal agreement could help heal the rift in British politics opened up by the country’s 2016 referendum on membership of the EU, saying any further delay to Brexit would be “pointless, expensive [and] corrosive”.

“I hope … that this is the moment when we can finally achieve that resolution and reconcile the instincts that compete within us,” Johnson said.

The speaker of the House of Commons, John Bercow, said he had selected for a vote a proposal to withhold support for Johnson’s Brexit deal until formal ratification legislation has passed.

The amendment was put forward by former Conservative MP Oliver Letwin and is backed by a cross-party alliance of opposition MPs. If it passes, it would force Johnson to request an extension to Brexit by the end of Saturday.

Read more about the amendment in our explainer on Saturday’s special parliamentary session, here.

Steve Baker, the head of a hardline Brexit faction in Johnson’s Conservative Party, has told his European Research Group (ERG) Eurosceptic allies that they should vote for the prime minister’s Brexit deal.

“Vote for Boris’s deal in the national interest,” Baker told ERG members in a post on Twitter.

1. vote for Boris's deal in the national interest

2. support the legislation to completion in good faith, provided it is not spoiled by opponents of Brexit

3. vote with Boris throughout to give him maximum opportunity to deliver for our country https://t.co/WKPwBP5Yz8

UK has no intention of asking for longer Brexit transition, minister says

Britain has no intention of extending the transition period that follows Brexit past the current December 2020 end date, Brexit Minister Stephen Barclay said.

“We have no intention of going beyond December 2020,” Barclay told BBC News.

Asked if Prime Minister Johnson would ask the EU to delay Brexit past the current October 31 deadline if the law required it, Barclay said Johnson would comply with the law.

Johnson’s Northern Irish allies will consider backing an amendment which would delay any immediate decision on the British prime minister’s Brexit deal when it comes before parliament.

The DUP had already said it would not vote in favour of the deal because of its customs implications for Northern Ireland. 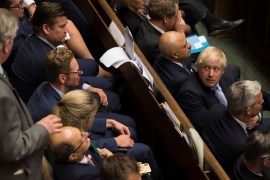 Parliament approves proposal designed to prevent possibility of no-deal departure from the EU on October 31. 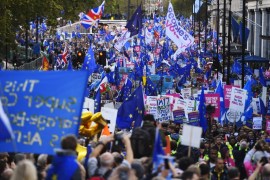 Hundreds of thousands descend on London streets to protest Brexit 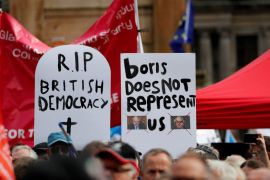