Turkey and the United States agreed to a temporary ceasefire in Ankara’s offensive in northeast Syria to allow Kurdish fighters withdraw from a planned so-called “safe zone”.

Turkey launched the cross-border operation on October 9 after repeatedly threatening to clear the border area of the Kurdish People’s Protection Units (YPG) fighters, which it considers a “terrorist” group. Ankara said the campaign, dubbed Operation Peace Spring, would also allow the repatriation of some of the 3.6million Syrian refugees Turkey hosts on its soil.

The ceasefire grants the Kurdish-led forces, who were Washington’s main Syrian ally in the fight against the Islamic State of Iraq and the Levant (ISIL, or ISIS), five days to withdraw from the region.

US ground troops will not enforce Syria safe-zone, says Esper

US Defense Secretary Mark Esper said no US troops will take part in enforcing the so-called safe zone in northeast Syria and that Washington “is continuing our deliberate withdrawal from northeastern Syria”.

Speaking to reporters, Esper said he spoke with Turkish Defense Minister Hulusi Akar and reminded him of Ankara’s responsibility for maintaining the security of ISIL prisoners in areas affected by Turkey’s offensive.

In a Twitter post, the Turkish leader said he spoke with US President Donald Trump on the phone and expressed his “satisfaction with the mutual steps we have taken to strengthen Turkish-American relations”.

Following a phone call with Erdogan, Trump said both the Turkish leader and Kurdish fighters want the ceasefire in northeast Syria to work.

Trump also announced European countries were willing to take back suspected ISIL fighters “that came from their nations” and currently being held in prisons in northeast Syria.

Just spoke to President @RTErdogan of Turkey. He told me there was minor sniper and mortar fire that was quickly eliminated. He very much wants the ceasefire, or pause, to work. Likewise, the Kurds want it, and the ultimate solution, to happen. Too bad there wasn’t…..

…..this thinking years ago. Instead, it was always held together with very weak bandaids, & in an artificial manner. There is good will on both sides & a really good chance for success. The U.S. has secured the Oil, & the ISIS Fighters are double secured by Kurds & Turkey….

….I have just been notified that some European Nations are now willing, for the first time, to take the ISIS Fighters that came from their nations. This is good news, but should have been done after WE captured them. Anyway, big progress being made!!!!

Erdogan: US should ensure YPG withdrawal from north Syria

Erdogan said it was US’s responsibility to ensure YPG fighters withdraw from northeast Syria within the ceasefire period, adding that Turkey aims to establish 12 observation posts in its planned “safe zone”.

The region would be 32 kilometers (20 miles) deep and 444 kilometers (275 miles) wide, stretching from the city of Manbij to the Iraqi border. “The safe zone we have expressed is not just between Ain Al-Arab (Kobane) and Tal Abyad,” he said.

Speaking to the foreign press, Erdogan said two million refugees can be settled in the “safe zone” if it also includes the cities of Deir Az Zor and Raqqa.

He added that Turkey will respond if the Syrian government, which has moved into some areas that Kurdish fighters has already left, “makes a mistake”.

French President Emmanuel Macron said Turkey’s military operation in Syria is “madness,” adding that he considers what happened over past days in Syria is a grave fault of NATO and the West.

Speaking at a press conference in Brussels, Macron also called on European Union members to rebuild an autonomous military capacity in the Middle East.

“Europe can no longer be a junior partner in the Middle East,” he said.

Turkey’s president warned Ankara would restart its operation against Kurdish forces in Syria on Tuesday evening if they do not withdraw from a “safe zone”.

“If the promises are kept until Tuesday evening, the safe zone issue will be resolved. If it fails, the operation… will start the minute 120 hours are over,” Erdogan told reporters during a briefing in Istanbul.

He added that Ankara had no intention of staying in areas under its control in northern Syria.

Erdogan said there were no ongoing clashes in northeast Syria on Friday following an agreement between Ankara and Washington to halt the Turkish assault.

He told reporters US and Turkish officials would be in constant contact to implement the agreement together.

Turkey is violating an hours-old ceasefire in northeast Syria and still targeting civilians with air strikes and artillery fire, a spokesman for the Kurdish-led Syrian Democratic Forces (SDF) said.

“Despite the agreement to halt the fighting, air and artillery attacks continue to target the positions of fighters, civilian settlements and the hospital” in the battleground border town of Ras al-Ain, said Mustafa Bali.

Despite the agreement to halt the fighting, air and artillery attacks continue to target the positions of fighters, civilian settlements and the hospital in Serêkaniyê/Ras al-Ayn. Turkey is violating the ceasefire agreement by continuing to attack the town since last night.

Pompeo seeks to assure Israel after US pullout from Syria

US Secretary of State Mike Pompeo underscored US-Israeli efforts to counter Iran in talks with Prime Minister Benjamin Netanyahu, in an apparent attempt to ease concerns in Israel that Tehran could exploit a US military pullback in Syria.

Pompeo and Netanyahu met in Jerusalem hours after Turkey agreed to pause its offensive on Kurdish forces in Syria.

Israel sees Syria’s Kurds, once US allies, as a counterweight to armed groups in northern Syria. It also worries that its arch-foe Iran or local allies could fill the vacuum left by a disengaged US.

Pompeo said he and Netanyahu discussed “all the efforts we’ve made to push back against the threat not only to Israel but to the region and the world from the Islamic Republic of Iran”.

“We shared our ideas about how we can ensure Middle East stability together, and how we would further our efforts to jointly combat all the challenges that the world confronts here in the Middle East,” Pompeo told reporters with Netanyahu by his side.

In a statement, the SDF reiterated their commitment to the Turkey-US ceasefire deal, along the stretch between the towns of Ras al-Ain and Tal Abyad.

The leader of Turkey’s Nationalist Movement Party (MHP) welcomed the deal between the US and Turkey on halting Ankara’s push in northern Syria.

In a statement, Devlet Bahceli said: “The Nationalist Movement Party finds the deal made between Turkey and the US delegation valuable.”

Bahceli praised Erdogan for “reiterating Turkey’s legitimate position to the world and for not making concessions on his dedication” to Turkey’s operation in Syria.

Pompeo met Netanyahu in Jerusalem amid concern among Israelis over Trump’s Syria policy.

Israel has long-standing concerns over whether its arch-enemy, Iran, will move to fill any vacuum in neighbouring Syria, where Tehran has been supporting President Bashar al-Assad in an eight-year-old civil war.

Russia wants information from Turkey on Syria deal with US

The Kremlin said it expected to receive information from Turkey after it agreed to a deal with the US to halt its offensive in Syria for five days, the RIA news agency reported.

Erdogan is due to hold talks with his Russian counterpart Vladimir Putin about Syria on Tuesday next week in southern Russia.

Shelling and gunfire resounded around the northeast Syrian town of Ras al-Ain, a day after Turkey agreed to pause its offensive in Syria for five days to let Kurdish forces withdraw.

Machine-gun fire and shelling could be heard from the Turkish town of Ceylanpinar across the border from Ras al-Ain, and smoke rose from one part of the Syrian town. It was unclear whether there was any damage from the shelling heard on Friday.

There was no immediate response from Ankara.

Australia ruled out retrieving dozens of Australian women and children from refugee camps during the ceasefire in Syria, with Home Affairs Minister Peter Dutton saying the situation remained too dangerous to send troops or officials into the war-torn nation.

About 46 Australian women and children, who fled the territory held by ISIL, are being held at the al-Hawl refugee camp in northern Syria near the area of the Turkish operation.

Eight Australian offspring of two slain ISIL fighters were removed from Syria in June, Australia’s only organised repatriation from the conflict zone.

Antonio Guterres, the secretary-general of the United Nations, welcomed efforts to de-escalate hostilities in northeast Syria and protect civilians, according to a spokesman.

In a brief statement, the UN said: “The secretary-general recognises that there is still a long way to go for an effective solution to the crisis in Syria.”

The extent of the ceasefire stretched 100km along the Syria-Turkey border from the town of Tel Abyad to Ras al-Ain, he told Ronahi TV. “We have not discussed the fate of other areas,” he said, referring to other parts of northeast Syria where Turkey wants to create what it calls a “safe zone”.

“We will do whatever we can for the success of the ceasefire agreement,” Abdi said, describing it as a “tentative agreement”.

The president of the UN Security Council said that Thursday’s ceasefire would be “a great thing if it happens”.

South Africa’s UN ambassador, Jerry Matjila, this month’s president, told reporters that members were waiting for details. “If it does happen, I think it’s a step in the good direction,” he said. 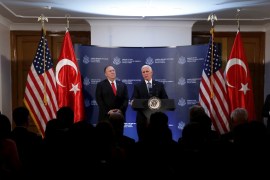 US, Turkey agree on Turkish ceasefire with Syrian Kurds

US vice president says Ankara agreed to a five-day ceasefire in Syria to allow Kurdish forces to withdraw. 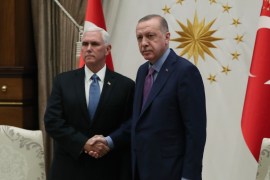 Full text of Turkey, US statement on northeast Syria 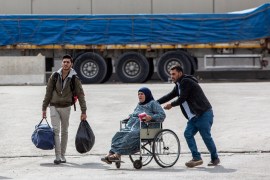 ‘For a better life’: Families return to Turkey from NE Syria

Citing rising prices and fears of government takeover, Syrians return after months on the other side of the border.