In the last four days, Shabir, who sells curtains and bedsheets, has not earned a single penny, but the 60-year-old shopkeeper insists the “silent protest” by traders is important “for the future of their children”.

“Our lives are finished now and we fear for the tomorrow of our children,” he told Al Jazeera as he sat in his shop located in the heart of old Srinagar’s Nowhatta area that has been the epicentre of clashes between the youth and Indian armed forces.

“All means of protest for us have been choked and this is the only way to resist.”

Traders in the region have been running their businesses for just two hours from 7:30am to 9:30am as a mark of protest against the Indian government’s decision on August 5 to scrap Article 70 of the constitution that granted special rights to the Muslim-majority region.

The near-total shutdown of businesses, schools and civilian activity in the disputed region has forced the government to take out full-page ads in local newspapers, urging people to open their shops and send their children to school.

The advertisement heading read “Closed shops, no public transport? Who benefits?” It asked people to make a choice. However, it had little impact on the ground, as people continued the shutdown “as an act of defiance”.

The authorities on Monday restored the postpaid mobile phone services which nearly 1.8 million people have access to in the region of nearly seven million people.

But the internet blackout and ban on prepaid phones continue to be in place keeping people cut off from the outside world for more than 70 days now.

While Shabir says he has been able to earn $100 since August 5, the mobile store adjacent to his shop run by Jalees Ahmad, 45, has had no sales at all amid the unprecedented phone restrictions.

The authorities arrested thousands of separatist leaders, protesters and pro-Indian Kashmiri politicians in the wake of the August 5 decision and brought thousands of additional troops to one of the most militarised zones in the world.

Tens of thousands of people have died as India deployed nearly half a million troops to quell an armed rebellion that erupted in the late 1980s. Fatalities sharply dropped in the 2000s but since the Hindu nationalist Bharatiya Janata Party (BJP) came to power more than five years ago, the region has seen an uptick in violence.

The abrogation of Article 370 was one of the main poll planks of Prime Minister Narendra Modi, whose BJP is opposed to autonomy given to Kashmir as part of its “one nation, one constitution” vision.

Rights groups say hundreds of those arrested, including minors and patients with terminal illnesses, have been booked under the Public Safety Act (PSA), a controversial law under which a person can be held for up to two years without bail.

While most of the shopkeepers are distressed due to the losses, many are equally resolved to carry on their “protest”.

“Our protest is part of our freedom struggle which we are fighting since 30 years, where thousands of people have been killed and blinded,” says salesman Jalees sitting at his shop waiting for customers.

Like Shabir, Jalees too has to pay the shop rent. He has to cover the education of his children and support his family which would cost him his entire monthly salary of approximately $300. But they are ready to “suffer the losses”.

“This is the Muslim-majority land but we fear this all will change,” said another shopkeeper who wished to remain anonymous.

“If police sees us talking to journalists, they might come to pick us up in the evening. There is only fear among people who have been crushed from all sides,” he said.

The region’s police chief, Dilbagh Singh, told Al Jazeera that armed rebels were targeting people who were trying to resume their normal work.

He said that the latest target was a 45-year-old non-local truck driver from the state of Rajashthan who was shot dead in south Kashmir’s Shopian district on Monday evening when he was loading apples in his truck.

“There were militants and their overground workers who were spreading posters and threatening shopkeepers and farmers,” the official said adding that they have launched crackdown on the network of overground workers of armed groups and arrested 20 people.

The police official said that the incidents of threats have particularly surfaced in southern Kashmir districts where rebels are active.

‘UN has failed all’

Indian Prime Minister Modi sold the move as a way to bring development to the region but since the lockdown was placed in August, the apple industry – the lifeblood of the economy involving nearly half of the state’s population – has suffered.

Abdul Ahad, who works as a tourist driver alleged that the government is “bringing workers of the BJP” to Kashmir and “presenting them as tourists”.

“They are busy in showing tourism is returning back [to normalcy] through their propaganda media. Their democracy in Kashmir is based on lies. They lie every day,” he said while puffing on a cigarette.

Like the shopkeepers, school and college students in the region too have stayed away from their classes. The annual board exams are nearing but the students have not completed their syllabus.

“Our parents groom us for 10-15 years. We study, work hard, secure distinctions but one day we are hit with a bullet suddenly. What is our future? Why should we worry about schools when we are not sure about our future,” said Bisma Shafi, a 25-year-old college student.

“What does education mean in such [a] situation, when our lives are at an edge, when kids are jailed and tortured?” asked Shafi.

After August 19, when the curfew was lifted in Kashmir, the government announced the opening of educational institutions but the students have stayed away as parents fear for the safety of their children.

A college professor in the main city of Srinagar told Al Jazeera that they were being asked by authorities to “motivate students to attend classes in uniforms”.

“They want us to give students projects, force them to come for exams but we don’t want to do that because it is not a normal situation,” the college professor told Al Jazeera on the conditions of anonymity.

Many residents also expressed their disappointment with the global human rights organisations and the United Nations.

“What is United Nations doing?” asked Sameed Ahmad, 31, who works in the Middle East and has come to Kashmir to attend his sister’s wedding.

“It [the UN] has not done anything for the oppressed people of the world. It has failed [us] all,” he said. 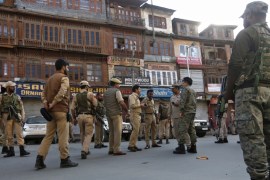 Police say no reports of casualties from the fighting following a raid in a village south of India-administered region. 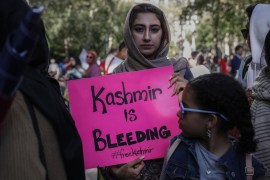 Boys as young as 9 in police custody in violation of juvenile laws, authorities deny action against minors. 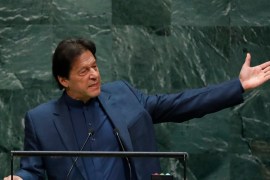