Iraq’s top diplomat has said Baghdad will take back its citizens suspected of fighting with the Islamic State of Iraq and the Levant (ISIL or ISIS) in Syria, while urging home countries of other detainees to also take the “needed measures”.

Mohammed Ali al-Hakim’s comments on Thursday followed talks with his French counterpart, Jean-Yves le Drian, who was in Baghdad to discuss the fate of thousands of suspected ISIL members held in makeshift prisons in northeast Syria following a Turkish offensive in the region.

“We discussed the situation in Syria and Iraq is taking all measures to prevent foreign fighters from crossing through the border into Iraq,” al-Hakim told a news conference.

“The number of the foreign fighters in Syria is very high, and they are from up to 72 countries. These countries should take necessary measures toward their citizens,” he said, a move that signals Baghdad will not accept those who came from around the world to Iraq and Syria to join the armed group.

Iraq will repatriate its own citizens and put them on trial, he added.

The Kurdish-led Syrian Democratic Forces (SDF) says it is holding about 12,000 suspected ISIL fighters in northeast Syria. They include 2,000 foreigners, of which 800 are Europeans.

SDF is also holding tens of thousands of women, many of them wives and widows of ISIL members, and their children. The Kurdish-led forces, however, have warned they might not be able to adequately guard the ISIL fighters because of Turkey’s military operation in northeast Syria. Over the weekend, the SDF said some 780 ISIL supporters fled a camp for the displaced in the Syrian town of Ain Issa.

Ankara considers the Kurdish forces as “terrorists” and said its operation, launched last week, is aimed at pushing back the SDF from the Turkey-Syria border.

France and other European countries have warned the Turkish offensive could lead to a revival of ISIL, which once held large parts of Iraq and Syria.

The armed group was defeated in Iraq two years ago and in Syria in March. but its sleeper cells have continued to carry out attacks in both countries.

Thursday’s meeting between French and Iraqi foreign ministers in Baghdad came a day after France’s President Emmanuel Macron said ISIL foreign fighters who might flee Syrian detention centres and go to Iraq should be arrested and sent to trial there.

Some Iraqi politicians oppose the call.

Influential Shia leader, Muqtada al-Sadr, previously said the Iraqi government must not take foreign fighters, as “we are not ready to spend money on them”.

Le Drian, speaking alongside al-Hakim on Thursday, said the international coalition that fought ISIL in Iraq and Syria must confront the “new risks created by the Turkish intervention”.

He later met Iraqi President Barham Salih, who called on the international community to support Iraq so that it can preserve its security by preventing ISIL from resuming its activities.

Hundreds of foreigners have been sentenced to death or life imprisonment in Iraq for belonging to ISIL.

Eleven French suspects who were handed over to Iraqi authorities early this year by the SDF were sentenced to death by a court in Baghdad.

Their execution in June sparked a public outcry in France. The death penalty is outlawed throughout the European Union. 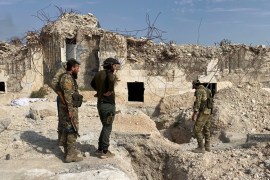 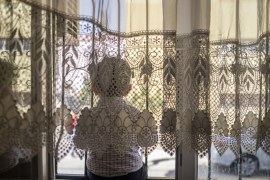 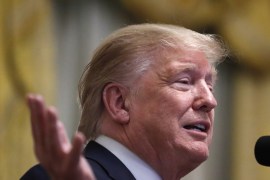