From fairs promoting healthy diets to lectures teaching students how to reduce food waste, a wide range of public events is planned for Wednesday in some 150 countries to raise awareness about tackling world hunger and highlight the challenges facing the global food supply.

The initiatives are part of World Food Day, which is marked annually on October 16, the day the Food and Agriculture Organization (FAO), a United Nations agency, was founded in 1945.

While on a downward trend between 2005 and 2015, world hunger has slowly but steadily increased in recent years. In 2018, approximately 820 million people worldwide were undernourished – up from 785 million people four years ago.

At the same time, an estimated 1.3 billion tonnes of food are wasted or lost annually, according to the FAO, which defines food waste as “the discarding or alternative (non-food) use of food that is safe and nutritious for human consumption”.

“We waste about one-third of the food produced for human consumption, at a cost of $990bn per year,” Inger Andersen, executive director of the United Nations Environment Programme, told Al Jazeera.

“You would be hard pressed to find such inefficiencies in other industries,” she said.

The threat of food waste

In recent years, there has been a renewed attempt to drastically reduce food waste as part of efforts to eliminate hunger.

One of UN’s 17 Sustainable Development Goals (SDGs) set the target of halving food waste by 2030 “at the retail and consumer levels and reduce food losses along the production and supply chains, including post-harvest losses”. 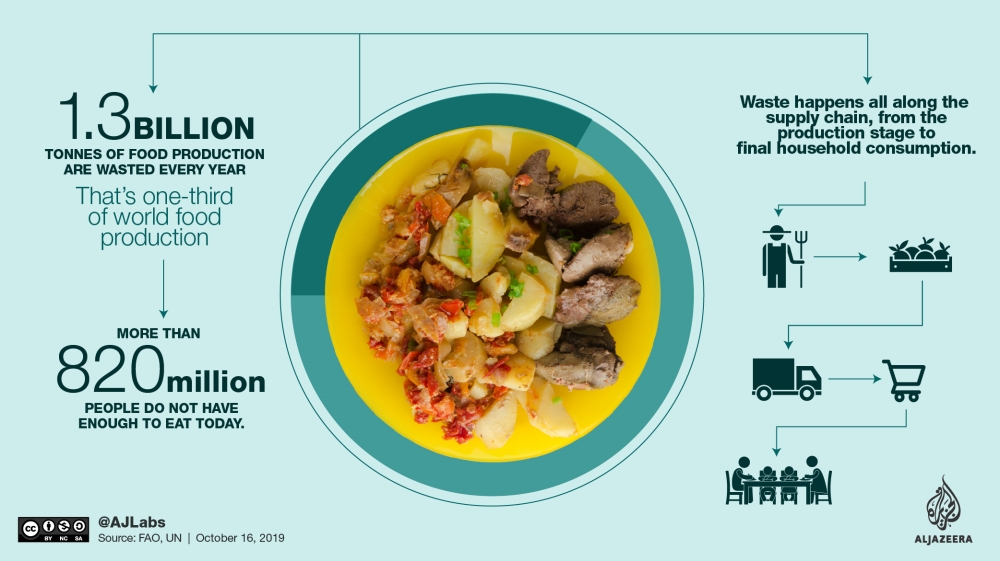 A key area affected by food waste is the climate. According to Andersen, food waste was currently generating eight percent of greenhouse gas emissions and hence food loss and waste was a “critical tool” for nations in the fight against climate change.

She also warned about the dangers posed to biodiversity: “Food wastage exacerbates the negative externalities that mono-cropping and agricultural expansion into wild areas create on biodiversity loss.”

“In addition to deforestation to grow foods that will never be consumed, agricultural runoff and fish farming wastes are creating dead zones in aquatic ecosystems, and food waste in landfills (waste disposal sites) is disrupting food webs, as certain predators shift towards a diet of human trash.”

Gulnihal Ozbay, a professor at Delaware State University, told Jazeera that in the United States – one of the biggest producers of food waste in the world – the “majority of material in landfill comes from food waste”.

Ozbay said creating landfills means finding more land to clear – “more trees that need to be cut” – an exercise that can severely affect the world’s efforts to tackle climate change.

In the US, they were responsible for approximately 14.1 percent of these emissions in 2017, as documented by the EPA.

Andersen said that “making a huge shift in household behaviour” was a major challenge in combatting the efforts to reduce food waste.

Ozbay agreed, saying many people “take our food supply for granted”, especially in places such as the US. “Thinking that there is an endless supply of food, people are unlikely to use it efficiently.”

The FAO says that in middle and higher-income countries, food is wasted at later stages in the supply chain – mainly at the retail level and due to consumer behaviour.

The agency estimates that consumers in rich countries waste approximately as much food – 222 million tonnes – as the entire net food production of sub-Saharan Africa – 230 million tonnes. 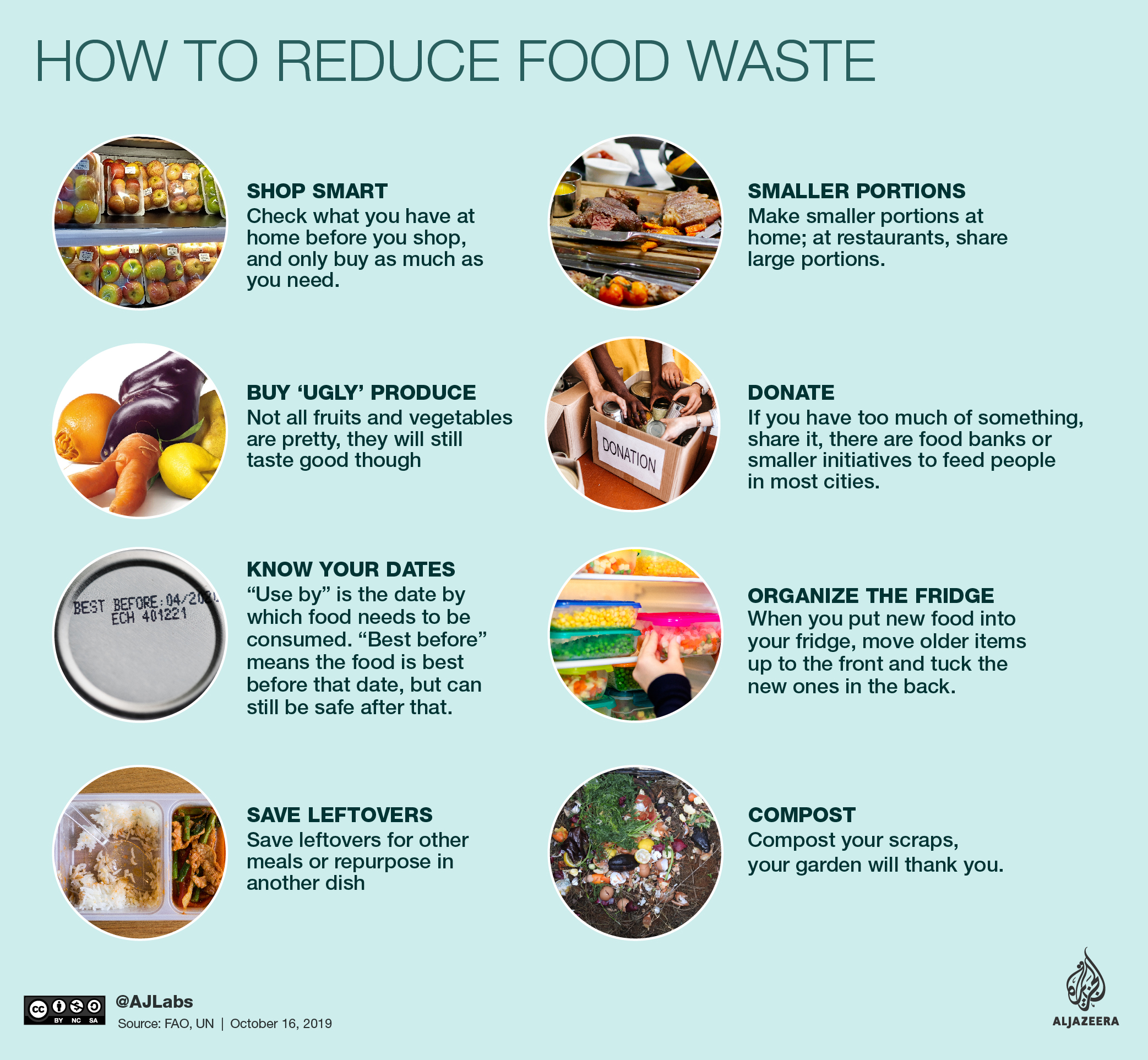 Harvard professor and food law expert Emily Broad Leib told Al Jazeera it was important to encourage and teach people to how to prepare food and repurpose it, if needed.

“People may buy something for one purpose … like tomatoes for their salad … and if the tomato gets mushy, they are like, ‘I don’t want to eat this tomato raw,'” she said.

Leib noted classrooms were a key place where authorities can direct their focus in educating youth on how to repurpose food and combat its wasting.

“It is hard to reach consumers once they’re grown up and in their homes. However, we have seen a lot of social change take place at the school level such as the campaign against littering, against smoking or to recycle,” she said.

Looking ahead, Andersen said reaching a 50 percent reduction in the next decade globally “will necessitate a nuanced understanding of the root causes of food waste in different cultures and family structures around the world”.

Rethinking and understanding of the way “we shop, cook, store, reuse, and value food”, especially within the “time constraints of working families”, was necessary, she added.

For her part, Leib cast doubt whether the target was achievable by 2030, identifying the lack of benchmarks as one of the challenges.

“It would be helpful if countries set goals for 2020 and 2025 to have benchmarks so they can show they are making progress towards the overall goal,” Leib said.

Another major hurdle was a shortage of date, according to Andersen, who pointed to the limited availability of first-hand figures on household food waste in Africa, Asia and Latin America.

“Collectively, we know that food waste is a problem, but individually, we think we waste very little”, she said.

Ozbay urged governments to support local businesses and markets to avoid a reliance on packaged food items from mega-corporations when it comes to covering food needs around the world.

The nonprofit organization ReFED estimates that food waste generated by grocery retailers is eight million tonnes a year – while the EPA believes 23 percent of landfill waste comes directly from containers and packaging.

Andersen said that while there were extremely dedicated individuals working in this area to bring change, there also needed to be more efforts by countries in setting targets and measuring baselines in order to “make the profound changes the target requires”.

“What we put on our plate, or don’t, matters tremendously for the planet,” she added.