The parents of a British teen killed in a road crash involving a US diplomat’s wife met with President Donald Trump at the White House on Tuesday to urge that she be returned to the UK to face justice.

Trump met with Tim Dunn and Charlotte Charles and dropped a “bombshell” that the woman at the wheel, Anne Sacoolas, was in the building and willing to meet them.

The couple said they refused.

“We made it very clear that, as we’ve said all along, we will meet with her… and we would still love to meet with her, but it has to be on our terms and on UK soil,” Charles told reporters after the meeting, which lasted about 15 minutes.

“She needs to come back and face the justice system,” she said.

Harry Dunn, aged 19, died on August 27 in a head-on collision between his motorcycle and a car being driven on the wrong side of the road in Northamptonshire in central England.

Sacoolas was interviewed by police but flew back to the US after claiming diplomatic immunity.

She has not been charged with criminal wrongdoing, but her claim of immunity and return to the US have provoked an uproar in Britain.

In his surprise meeting with Dunn’s parents, Trump indicated Sacoolas would not be returning to Britain but was sympathetic.

“When we first got there, he extended his condolences to us, which did feel sincere. I don’t suppose we would have expected anything else. Many of his staff also did the same,” Charles said.

Trump “was quite respondent”, she said.

At end of their meeting “I asked him again, I said, ‘If it was your 19-year-old son, or your son no matter what age, you would be doing the same as me.’ And he was holding my hand at the time and he said, ‘Yes, I would’ and he said ‘Maybe we’ll try and push this from a different angle’,” Charles said.

Dunn said the president “was very gracious and spoke very well to us”.

“He was understanding and I think he genuinely will look to try to resolve this in a way to help us,” he said.

Prime Minister Boris Johnson has said Sacoolas should return to Britain, saying: “I do not think that it can be right to use the process of diplomatic immunity for this type of purpose.”

But a Washington Post photograph of briefing notes held by Trump in an October 9 news event indicated that “the spouse of the US Government employee will not return to the United Kingdom”.

“We still want justice for Harry and we will take it as far as we possibly can to ensure that’s done,” Charles said. 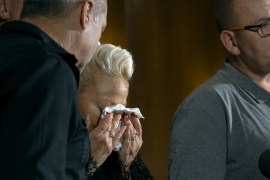 Anne Sacoolas is suspected of being involved in the death of 19-year-old Harry Dunn, who was hit riding his motorbike.