Beirut, Lebanon – Firefighters in Lebanon on Tuesday battled massive wildfires in several areas in the country, before moderate rains in the evening brought them under control in most affected areas.

With more than 100 blazes erupting from north to south over the past two days, Raymond Khattar, the director-general of Lebanon’s Civil Defence, described the forest fires as the worst to have hit the country in decades.

At least one man died from suffocation after battling a fire in the city of Aley for several hours. Lebanese media also reported that a woman had lost her life after being run over by a fire truck in the southern coastal city of Sidon.

The Lebanese Red Cross announced that they had treated more than 70 people at a field hospital in Damour, mostly for smoke inhalation, minor burns and other light injuries.

The areas most heavily affected were in the Chouf and Metn regions, in the lush Mount Lebanon mountain range east and southeast of the capital, Beirut.

Aided by strong winds and unseasonably high temperatures, the fires ate their way through dense forest near the towns of Meshref and Damour in Chouf and swept into the residential areas overnight on Monday, leading many families to flee their homes.

Massive wildfires are spreading across Lebanon – some of the worst the country has seen in decades #لبنان_يحترق pic.twitter.com/UJikqSncgN

The Lebanese state’s ability to combat the rapidly spreading fires quickly came into question, especially given that three aircraft specialised in fighting blazes remained grounded at the airport of Beirut, on Tuesday.

The three Sikorsky S-70 model helicopters were donated to the Lebanese state in 2009, taking part in firefighting missions for several years before falling into disrepair. They have remained non-operational for at least five years due to the failure of successive governments to fund their maintenance.

At the same time, dozens of Civil Defence teams were fighting the fires with little technical capabilities, even enlisting the use of anti-riot vehicles mounted with water cannons.

The riot police vehicles are perfectly maintained while the firefighting helicopters are grounded because of lack of maintenance. Sums the country up. https://t.co/mA7unqw4Ta

Despite the respite brought by rains on Tuesday evening, there are fears that the blazes will reignite as the weather forecast for Wednesday predicts strong winds up to 45 kilometres (28 miles) an hour and temperatures of up to 35 Celsius (95 Fahrenheit).

George Mitri, director of the land and natural resources programme at the University of Balamand, said this meant the already-severe devastation would continue.

Before the recent fires, Lebanon had already lost three million trees in 2019 alone from forest fires, equivalent to all trees planted in reforestation initiatives over the last 15 years, Mitri said.

That figure equated to about 1,300 hectares (3,212 acres) lost this year, which is already above average. But Lebanon had lost at least another 1,200 hectares (2,965 acres) in just the last three days, Mitri added, meaning that the country had now lost double the yearly average.

“We have a new record in the extent of burned areas and the number of trees,” he told Al Jazeera. “It’s absolutely catastrophic to our national biodiversity.” 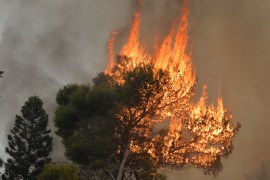 In Pictures: Wildfires rage in Lebanon

Firefighters are trying to extinguish blazes that erupted in mountainous areas amid high temperatures and strong winds. 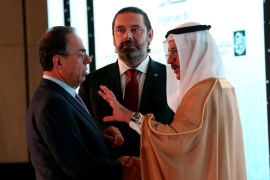 Lebanese Prime Minister Saad Hariri has said he is hoping the UAE will inject cash into Lebanon’s central bank.