Turkey’s military operation in northeast Syria will continue until Kurdish fighters in the region drop their weapons and withdraw from a planned “safe zone”, President Recep Tayyip Erdogan has said.

Shrugging off international calls for a ceasefire on the eve of a meeting with top US officials, Erdogan on Wednesday told his party’s deputies that no foreign power could stop the offensive – now in its eighth day – before all of Ankara’s goals were met.

“We would stop the operation tonight, if they withdrew right away,” he said, referring to the Kurdish-led Syrian Democratic Forces (SDF), which Turkey considers a “terrorist organisation”.

Erdogan rejected any direct or indirect negotiations with the Kurdish fighters and said the only way the offensive would be halted was for them to “lay down their arms … destroy all their traps and get out of the safe zone that we have designated”.

“God willing, we will quickly secure the region stretching from Manbij [in northwestern Syria] to our border with Iraq,” Erdogan said during his speech in Parliament. 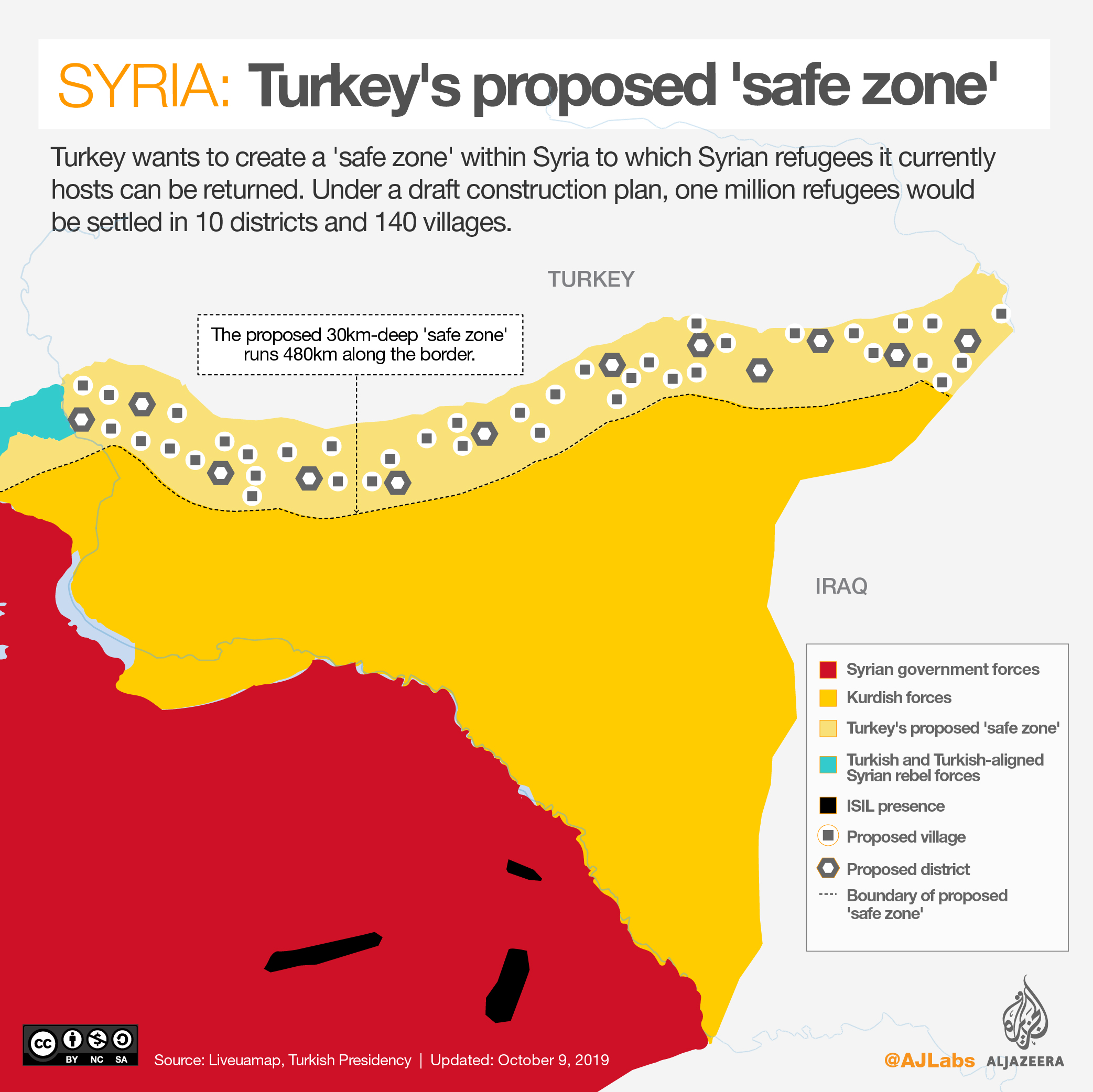 Turkey launched its offensive on October 9, aiming to push back what it called “terrorist” elements from the border region east of the Euphrates River and establish a “safe zone” stretching at least 30km (19 miles) into Syria to resettle some of the 3.6 million refugees it hosts.

Ankara considers the Kurdish People’s Protection Units (YPG), a group forming the backbone of the SDF, an extension of the Kurdistan Workers’ Party (PKK), which has waged a decades-long armed campaign against the Turkish state for autonomy. The PKK is designated a “terrorist” organisation by Turkey, the United States and the European Union. But unlike Ankara, Washington and Brussels do not consider the YPG and its political wing – the Democratic Union Party – as “terrorist” groups.

Since the launch of the operation, Turkey and its allied Syrian rebel forces have secured a number of villages along the border region, according to the Turkish authorities.

However, the town of Ras al-Ain has held out, with battles raging on Wednesday.

Al Jazeera reporters along the border said heavy gunfire and artillery fire was heard across the city amid a “fierce” battle for its control, with Kurdish fighters burning tyres in a bid to blind Turkey’s fighter jets and digging in against a ground offensive by Turkish-backed Syrian rebels.

“The fighting today in Ras al-Ain has been intense,” said Al Jazeera’s Charles Stratford, reporting from Ceylanpinar on the Turkey-Syria border. “The situation is incredibly tense.”

As Turkey’s military operation entered its second week, US President Donald Trump was due on Wednesday to dispatch his deputy Mike Pence and Secretary of State Mike Pompeo to Ankara, in a visit that comes days after imposing sanctions on Turkey over its offensive.

Pence’s office said he would meet Erdogan on Thursday and “voice the United States’ commitment to reach an immediate ceasefire and the conditions for a negotiated settlement”. Robert O’Brien, the US national security adviser, is already in the Turkish capital for lower-level meetings before the arrival of Pence and Pompeo.

But Ankara has consistently rebuffed foreign pressure to curb its offensive.

Speaking in Parliament on Wednesday, Turkish Foreign Minister Mevlut Cavusoglu said threats and sanctions were unacceptable and pledged that Ankarawould retaliate against the US move.

Cavusoglu also said Turkey expected the US Congress to turn back from its “damaging approach”, and added that ties between Ankara and Washington were at a critical juncture.