Syrian government troops will deploy along the border with Turkey to help Kurdish fighters fend off Ankara’s military offensive in northern Syria, the Kurdish-led administration in the region said.

The move, announced on Sunday, represents a major shift in alliance for Syria’s Kurds and came hours after the United States said it was withdrawing its troops from the area to avoid getting caught in the middle of the fast-escalating conflict.

The Kurdish-led administration in a statement on Facebook said it had brokered the agreement with Syrian President Bashar al-Assad’s government to counter Turkey’s ongoing push, which has drawn widespread condemnation.

“In order to prevent and confront this aggression, an agreement has been reached with the Syrian government … so that the Syrian army can deploy along the Syrian-Turkish border to assist the Syrian Democratic Forces (SDF),” the statement said.

It would also allow for the “liberation” of other Syrian cities occupied by the Turkish army such as Afrin, the statement said. The Turkish army and its Syrian rebel allies drove Kurdish forces from Afrin in 2018.

Earlier on Sunday, Syria’s state-run SANA news agency reported Damascus, which is backed militarily by Russia and Iran, was sending troops to the country’s north to “confront the Turkish aggression”. It did not give further details.

The return of Syrian government forces to the region – where Syrian Kurds have built an autonomous administration over the course of the country’s eight-year-war – could further cement Assad’s hold over the country, and raise the risk of a clash between Syria and Turkey.

There was no immediate comment from Turkey. The government in Ankara considers the Kurdish People’s Protection Group (YPG), which forms the backbone of the SDF, a “terrorist” group linked to Kurdish separatists inside Turkey.

The developments reflect the chaos that has unfolded in the week since US President Donald Trump ordered US forces in the region to withdraw, clearing the way for the Turkish attack on the Kurdish fighters.

Trump’s decision has been broadly condemned at home and abroad by critics who accuse him of betraying the Kurds, who fought alongside the US to help defeat the Islamic State of Iraq and the Levant (ISIL or ISIS) armed group in Syria.

Mark Esper, US defence secretary, told US broadcaster CBS’ Face the Nation programme that up to 1,000 US troops would be withdrawn from northern Syria because of the increasing danger posed by the fighting.

“We have American forces likely caught between two opposing advancing armies, and it’s a very untenable situation,” he said in the interview that aired on Sunday.

He added that Washington had learned “in the last 24 hours” that Turkey “likely intend to expand their attack further south than originally planned and to the west”.

Turkey launched its military offensive on Wednesday, pledging to clear the area of “terrorist” elements and create a so-called “safe zone” to resettle some of the 3.6 million Syrian refugees it hosts on its soil.

The “safe zone” Turkey had proposed was to span a stretch of territory 120 km wide and 30km deep inside Syria. But Turkish President Recep Tayyip Erdogan said on Sunday the area may be wider, running between the towns of Hassakeh and Kobane, a stretch of 440km.

Al Jazeera’s Zeina Khodr, reporting from Akcakale on the Turkey-Syria border, said the withdrawal of US forces from northern Syria had put “the whole area up for grabs”.

“There’s more than one player in the Syrian conflict who wants to control this territory, which has oil and is the bread basket of Syria,” she said. The pact between the Kurds and Assad’s government indicates the end to the Kurdish-led administration’s rule in Syria, Khodr added.

“It’s unlikely that the Damascus government is going to allow them to continue governing this whole region by themselves,” she said, adding the SDF had “little leverage” over Assad’s government.

Turkey’s official Anadolu news agency, meanwhile, said Turkey-backed Syrian forces have advanced into the centre of a Syrian border town, Tel Abyad, on the fifth day of Turkey’s offensive. Turkey’s Defence Ministry tweeted that its forces had taken control of the main highway running between Hassakeh and Ain Issa, the administrative centre of the Kurdish-held areas.

Casualties mounted. On Sunday, at least nine people, including five civilians, were killed in Turkish air attacks on a convoy in Ras al-Ain, according to Syrian Kurdish officials and the Britain-based Syrian Observatory for Human Rights.

Images of the attack showed bodies and severed limbs strewn across the street. A journalist was among those killed.

The fighting has raised fears that some of the thousands of suspected ISIL fighters held by the SDF will escape or be released in the chaos, allowing the battered group to make a comeback.

On Sunday, heavy fighting reached a displaced-persons camp in Ain Issa, some 35km south of the border, that is home to some 12,000 people, including around 1,000 wives and widows of suspected ISIL fighters, and their children, held in a special detention area.

Jelal Ayaf, a senior official at the camp, told local media that 859 people successfully escaped from the section of the facility housing foreign nationals.

Ayaf also warned that “sleeper cells” had emerged from inside another part of the facility and carried out attacks, describing the situation as “very volatile”. Al Jazeera could not verify the claims.

Erdogan, for his part, called the reports “disinformation” aimed at provoking the US and other western countries, according to Turkey’s state-run Anadolu news agency. 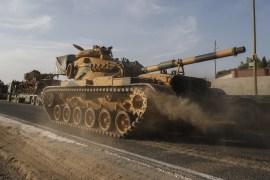 Turkish President Erdogan says Ankara will ‘not back down’ over Syria offensive as fighting flares for sixth day. 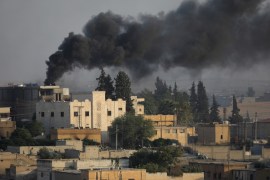 Reports of breakout from facility in Ain Issa amid ongoing Turkish offensive and US announcement of troop pull-out. 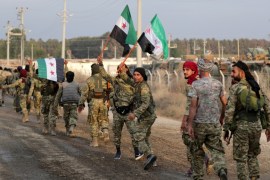 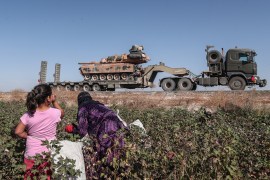