Ecuador’s President Lenin Moreno and leaders of the country’s indigenous peoples have struck a deal to cancel a disputed austerity package and end nearly two weeks of protests that have paralysed the economy and left seven people dead.

Under the deal announced just before 10pm on Sunday (0300 GMT Monday), Moreno will withdraw the International Monetary Fund (IMF) package that triggered a sharp rise in the price of gasoline and diesel fuel by removing subsidies.

Indigenous leaders, in turn, will call on their followers to end days of protests and street blockades.

The two sides say they will work together to develop a new package of measures to cut government spending, increase revenues and reduce Ecuador‘s budget deficits and public debt.

Al Jazeera’s Manuel Rapalo, reporting from Quito, said there were celebrations in the country’s capital after what he said was an “unexpected” deal was announced.

“This is certainly good news, and hopefully it means lasting peace for the streets of Quito and the rest of the country.”

Rapalo said the government is forming a commission with the indigenous groups to help decide the next steps in addressing the country’s economic problems.

Earlier on Sunday night, Moreno and the leaders of the indigenous groups held a nationally broadcast negotiating session, during which the president of the Confederation of Indigenous Nations, Jaime Vargas, demanded the immediate cancellation of Moreno’s October 1 decree ending fuel subsidies.

“This isn’t a demand of the indigenous people, it’s the demand of the country,” Vargas said. “We haven’t come to form negotiating commissions.”

Protests over the austerity package have blocked roads, forced the closure of businesses from dairies to flower farms and halved the country’s oil production, interrrupting exports.

In a shift from the heated language of the last 10 days of protests, each side praised the other’s willingness to talk as they outlined their negotiating positions in the first hour before a short break.

Moreno had earlier insisted on the need to eliminate fuel subsidies, but later on declared that a new decree would be issued, taking into consideration the requests of the protesters.

Ahead of the televised meeting, hundreds of black-clad riot police drove protesters out of north-central Quito’s Arbolito Park, the epicentre of the protests, and into surrounding streets.

The park had filled on Friday with mostly peaceful protesters chanting against the government.

But by Sunday afternoon the air was white with smoke from burning tyres and tear gas after more than 24 hours of clashes between police and hardcore protesters armed with sharpened sticks and improvised shields from satellite dishes or plywood.

Volunteer medics from the fire department and medical schools waved white sheets on poles as they led protesters to safety.

Young men from Ecuador’s indigenous minority and the mixed race, or mestizo, majority, milled about on streets under the eyes of police and a few dozen soldiers.

The public ombudsman’s office said on Sunday that seven people had died in the protests, 1,340 had been hurt and 1,152 arrested.

The government loosened a 24-hour curfew imposed on Saturday, allowing people to move freely around the capital between 11am and 8pm local time.

The protests have drawn thousands of Ecuadorians from outside the indigenous minority and many said they would continue demonstrating despite the negotiations.

Ecuador, a former OPEC member, was left deeply in debt by a decade of high spending by the previous government of former President Rafael Correa, exacerbated by the international decline in oil prices.

Moreno wants to raise taxes, liberalise labour laws and cut public spending in order to get more than US$4bn in emergency financing from the IMF.

Panic and speculation sent prices soaring, with costs of some products more than doubling.

In the country’s Amazon oil fields, protests at installations, described by some government officials as attacks, have halted or slowed production.

Ecuador had been producing 430,000 barrels of oil a day, but that had dropped to 176,029 barrels by Sunday, said an official at state oil producer Petroamazonas, who spoke on condition of anonymity because they were not authorised to release the information.

The drop in output has led to a loss of about $14m a day, the official said. 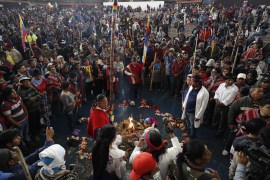 After days of deadly anti-austerity protests, meeting between President Moreno and indigenous leaders likely on Sunday. 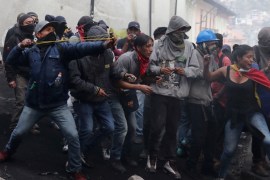 Will protests in Ecuador force the president to resign? 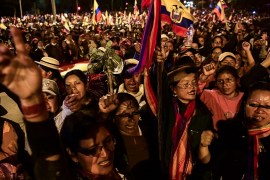