The two self-styled “outsider” candidates delivered a shock to the Tunisian political establishment when they came in a the top two of 26 candidates during the first round of the election held on September 15.

A first exit poll is expected to be published at 8pm local time (19:00 GMT) on Sunday.

The turnout was at 39.2 percent at 15:30 local time, according to Isie (Independent High Authority for Elections).

Earlier, at a cafe near a polling station in the Tunis suburb of Ariana, the seats were filled with men chatting and playing cards.

Everyone here said they had already voted or were planning to vote. Barista Mounir Ahazri did not want to give away who he will choose after finishing his shift.

“He is a statesman. I know him well, from 1999 when I was a student in the law department,” he said, without mentioning his candidate by name.

“He is very intelligent and the other one doesn’t pay taxes,” said Fougali, 33, whose mother voted for Karoui.

“The majority of old people here are voting for Nabil Karoui because they think he is a good person that gives people pasta.”

Overhearing the conversation, Moaz Askri, a 50-year-old factory owner who voted for Karoui, joins the table. Karoui “is going to bring investment and reduce tax rates. He has an economic programme – the other one just says he is going to let people decide!”

While they both present themselves as anti-establishment figures, the two candidates present vastly different alternatives for president. Karoui has sought to win votes among Tunisia’s poor, the business class and secular voters. Saied is popular among social conservatives while his no-frills campaign has appealed to young people.

Weeks before the first round of the presidential election, Karoui was arrested and held for alleged money laundering and tax evasion. He denies the charges and said they were politically motivated.

Amid growing pressure to release him in order to allow for a fair election campaign, he was freed last week, although his detention could provide grounds to reject the result.

Saied, meanwhile, said that he would not campaign on “ethical” grounds given that his opponent was in jail.

Even before this, Saied ran a minimalist campaign, which in itself appealed to voters who see him as “clean”.

He proposes reorganising the political system by giving power to local councils and holds socially conservative views, opposing the decriminalisation of homosexuality and legislation that ensures equal inheritance for men and women.

The 56-year-old businessman based his campaign on ending poverty and says he wants to increase presidential powers by expanding the definition of national security to include social and economic issues.

He has also says he wants to liberalise Tunisia‘s economy.

Whoever wins, a political newcomer will be in charge of foreign affairs and national security, and will need to work with a fragmented parliament that is struggling to form a government.

“The biggest issue that we are facing is that we will have a weak government backed by a tiny majority, [if] they will be able to form a government at all,” said Youssef Cherif, head of Columbia Global Centers, adding that if Saied wins he may end up being isolated by the government.

“This is in a period where Tunisia needs to tackle important reforms to alleviate poverty and fight security problems.”

Despite the uncertainty, observers see this as a good sign for the country’s nascent democracy.

“It is a testament to Tunisia [that outsiders] could emerge,” says Charles Tripp, professor at the School of Oriental and African Studies.

“You look at Algeria, Egypt and Iraq – there is frustration that is being expressed against corruption and lack of services, but it is on the street. In Tunisia, they have the chance to say something like this at the ballot box.” 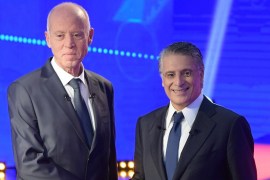 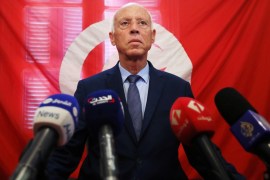 Without a party or much funding, Saied has emerged as a frontrunner to lead Tunisia thanks to his ‘utopist’ programme.