Two men have been killed and more than six million people advised to evacuate as a powerful typhoon bore down on the Japanese capital, Tokyo, bringing with it the heaviest rain and winds in 60 years.

Typhoon Hagibis, which means “speed” in the Philippine language Tagalog, made landfall on Japan‘s main island of Honshu on Saturday evening, bursting some river banks and threatening to flood low-lying Tokyo as it coincides with high tide.

The storm, which the government warned could be the strongest to hit Tokyo since 1958, brought record-breaking rainfall in many areas, with a whopping 939.5mm (37 inches) of rain over 24 hours.

Japan’s weather agency issued its highest level of disaster warning over the “unprecedented” downpours. At least 80 people were injured, according to Kyodo news, while more than 370,000 homes suffered power outages as a result of the typhoon.

Some 17,000 police and military troops were called up, standing ready for rescue operations.

“Unprecedented heavy rain has been seen in cities, towns and villages for which the emergency warning was issued,” Yasushi Kajiwara, forecaster at Japan’s Meteorological Agency (JMA), told reporters.

“The possibility is extremely high that disasters such as landslides and floods have already occurred. It is important to take action that can help save your lives.”

Even before making landfall, Hagibis caused enormous disruption, forcing the cancellation of two Rugby World Cup matches, delaying the Japanese Grands Prix and grounding all flights in the Tokyo region.

It crashed into Japan’s main Honshu island just before 7pm local time (10am GMT), barrelling into Izu, a peninsula southwest of Tokyo, the Japan Meteorological Agency (JMA) said, packing gusts of wind of up to 216 kilometres per hour (134 miles per hour).

The storm claimed its first victim hours before arriving on the coast when strong winds from its outer bands flipped a car in Chiba east of Tokyo and killed the driver. At least two landslides were confirmed, with a man in his sixties killed in one in Gunma, north of Tokyo.

By early evening on Saturday, tens of thousands were in shelters and receiving emergency rations and blankets, though a 5.7-magnitude quake that rattled the Tokyo area did little to calm nerves.

Among the evacuees were people whose homes were damaged by a powerful typhoon that hit the region last month.

“I evacuated because my roof was ripped off by the other typhoon and rain came in. I’m so worried about my house,” a 93-year-old man told national broadcaster NHK as he sheltered at a centre in Tateyama in Chiba east of Tokyo.

In Yokohama, outside of Tokyo, others hunkered down in their homes despite the storm.

“I’m 77 and I’ve never seen anything like this,” Hidetsugu Nishimura told AFP news agency. “We can hear an infernal din from the rain and the wind, and a fragment of the roof has gone. For an hour, the house was shaking from wind and rain.”

Tokyo’s Haneda airport and Narita airport in Chiba both stopped flights from landing and connecting trains were suspended, forcing the cancellation of more than a thousand flights, according to Japanese media.

Kanagawa prefecture officials said they would release water from the Shiroyama dam, southwest of Tokyo, and alerted residents in areas along nearby rivers.

A number of municipal governments issued evacuation orders to areas particularly at risk of floods and landslides, including some in the most populous Tokyo region.

Experts warned that Tokyo, while long conditioned to prepare for earthquakes, was vulnerable to flooding.

“We are heading towards high tide. If the typhoon hits Tokyo when the tide is high, that could cause storm surges and that would be the scariest scenario,” he said. “People in Tokyo have been in a false sense of security.”

Japan is hit by approximately 20 typhoons a year, though the capital is not usually badly affected.

Hagibis is bearing down on the region just weeks after Typhoon Faxai hit the area with similar strength, killing two and causing major damage in Chiba. 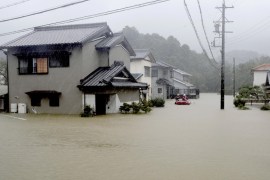 Heavy rains and strong winds hit Japan as the typhoon, forecast as the worst in six decades, makes landfall. 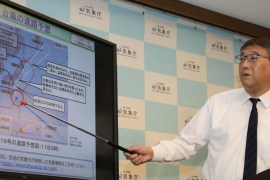 Domestic flights cancelled, residents warned of flooding as typhoon inches closer with wind gusts of up to 252km/h.