Peru’s President Martin Vizcarra has dissolved Congress on Monday, exercising seldom-used executive powers to shut it down, but the opposition-controlled legislature quickly retaliated by declaring the presidency vacant and swearing in Vice President Mercedes Araoz as the country’s new leader.

In a televised address, Vizcarra told the South American nation that he had decided to call new legislative elections after legislators proceeded with the holding of a controversial vote to replace almost all the members of the Constitutional Tribunal.

“We are making history that will be remembered by future generations,” he said. “And when they do, I hope they understand the magnitude of this fight that we are in today against an endemic evil that has caused much harm to our country.”

However, the opposition-led Congress defied the order, and instead declared that they no longer recognised Vizcarra as president.

Shortly thereafter Congress announced on Monday (past 0200 GMT Tuesday) the appointment of Araoz as president.

Later in the day, Peru’s police and military commanders announced that they still recognised Martin Vizcarras as president, despite the vote at the Congress.

The stunning turn of events could spell new instability as Peru grapples with the fallout of the Odebrecht corruption scandal, plummeting faith in public institutions and an inexperienced president struggling to govern.

“We don’t know what is going to happen next, what will President Martin Vizcarra do, will he use the army and the police to enter Congress is very unclear at this point,” she said.

Nonetheless, Vizcarra’s decision is likely to be widely welcomed by Peruvians who have been clamouring for new congressional elections to replace the majority party, led by former first daughter and presidential candidate, Keiko Fujimori, who is now behind bars.

Vizcarra has accused the opposition of stonewalling attempts to curb widespread corruption.

“Peruvians will not shed many tears,” said Steven Levitsky, a Harvard University political scientist who has extensively studied the nation.

Earlier on Monday, the opposition-run Congress defied Vizcarra by electing the first of up to six new leading court justices in a raucous vote. 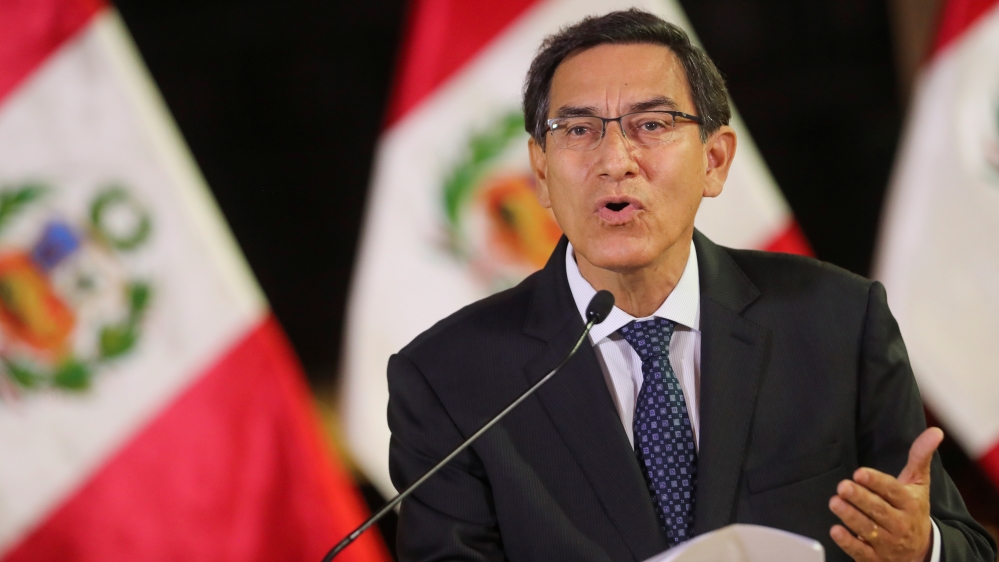 Some proposed nominees have come under fire for their links to judges ensnared in several back-to-back corruption probes that have discredited the country’s institutions in recent years.

“Close Congress, we’re not afraid,” Congressman Gilbert Violeta said in a debate marked by shouting, fist-pounding and a brief attempt to shut out Vizcarra’s prime minister.

That tribunal would have a say on the future of jailed opposition leader, Keiko Fujimori, as well as the investigation into the Odebrecht corruption scandal, Al Jazeera’s Sanchez explained.

Under Peru’s constitution, presidents can dissolve Congress to call new elections if the politicians deliver two votes of no-confidence in a government. The current Congress has already voted once that it had no confidence in the government.

A former vice president, Vizcarra has emerged as an unlikely champion of efforts to uproot corruption since taking office last year to replace former President Pedro Pablo Kuczynski, who stepped down in a corruption scandal involving Brazilian builder Odebrecht.

Vizcarra is barred from running in the next presidential election due to constitutional limits on consecutive terms. He proposed a snap election that would have ended his term and Congress’s term a year before they were due to end. But politicians shelved that proposal last week.