US President Donald Trump on Thursday again invited foreign interference in a US presidential election, by publicly calling on China to investigate Democratic political rival Joe Biden, a repeat of the request that had already triggered an impeachment inquiry in Congress.

As he left the White House for a visit to Florida, the Republican president told reporters he believed both China and Ukraine should look into 2020 presidential hopeful Biden and his businessman son Hunter, and described the impeachment inquiry as “crap.”

“And by the way, likewise, China should start an investigation into the Bidens. Because what happened in China is just about as bad as what happened with Ukraine,” Trump said.

Trump and his personal lawyer Rudy Giuliani have accused former Vice President Biden, a leading contender for the Democratic Party nomination of improperly assisting his son’s business ventures in Ukraine and China. They have provided no evidence to support their claims.

Trump said he had not directly asked Chinese President Xi Jinping to investigate the Bidens but it is “certainly something we could start thinking about”.

The Chinese embassy in Washington, DC did not immediately respond to a Reuters request for comment.

Trump’s appeal to China is particularly striking since Washington and Beijing are locked in a bitter trade war that has damaged global economic growth and are set to hold another round of talks in the United States in the coming week.

“Donald Trump has made it difficult for Republicans to stand up and say: It’s all a misunderstanding,” Al Jazeera’s Alan Fisher said from Washington, DC. “Especially as the Chinese will be here next week.”

The China remarks stiffened the resolve of Democrats in the House of Representatives to push ahead with an inquiry into whether Trump should be impeached following revelations by an anonymous whistle-blower who said Trump asked Ukraine’s President Volodymyr Zelenskyto investigate the Bidens.

Trump asked Zelensky in a phone call in July to investigate Biden and his son over allegations of corruption, even though there was no evidence of wrongdoing by the former vice president or his son. Hunter Biden was on the board of a Ukrainian gas company.

Trump froze $400m in US aid to Ukraine shortly before he asked its president for the favour, prompting accusations from Democrats that he had used US foreign policy for his own benefit. Trump has maintained he did nothing wrong and has called the impeachment inquiry “witch-hunt garbage”.

Reacting to Trump’s comments on Thursday, Adam Schiff, the chairman of the House Intelligence Committee, tweeted that the president “cannot use the power of his office to pressure foreign leaders to investigate his political opponents”.

He added that Trump’s “rant this morning reinforces the urgency of our work”.

The President cannot use the power of his office to pressure foreign leaders to investigate his political opponents.

His rant this morning reinforces the urgency of our work.

America is a Republic, if we can keep it. https://t.co/9KDCx1hVjs

Schiff later said Trump’s call for China to investigate a political rival is a “fundamental breach of his oath of office”.

A spokeswoman for Joe Biden said Trump was “desperately clutching for conspiracy theories that have been debunked and dismissed by independent, credible news organisations”.

The impeachment inquiry has angered Trump, whose volatile presidency survived a two-year federal inquiry that found Russia had intervened to help him win the White House in 2016. That investigation did not find evidence of criminal conspiracy between Trump’s campaign and Moscow.

Trump, referring to a controversy surrounding Clinton’s emails, said at that time: “Russia, if you’re listening, I hope you’re able to find the 30,000 emails that are missing. I think you will probably be rewarded mightily by our press.”

The president’s comments on Thursday came after a heated day in the impeachment inquiry.

On Wednesday, Trump railed at journalists during a news conference, used an expletive on Twitter and continued to call the inquiry a “hoax and a fraud” while pledging to cooperate.

Meanwhile, a longtime US diplomat who served as Trump’s special envoy for Ukraine appeared before congressional committee staff on Thursday as part of the inquiry.

Kurt Volker resigned as special representative for Ukraine negotiations on Friday, a day after the public release of a whistle-blower complaint that described him as trying to “contain the damage” from efforts by Giuliani to press Ukraine to investigate Democrats.

As the diplomat arrived on Capitol Hill, Giuliani shared on Twitter a series of text messages he had received from Volker discussing contacts with Andrey Yermak, an adviser to Ukrainian President Zelenskiy.

Giuliani has said senior officials at the State Department were aware of and endorsed his actions in Ukraine on behalf of the president.

In one text, Volker discussed a meeting in early August.

“Please send dates when you will be in Madrid. I am seeing Yermak tomorrow morning. He will come to you in Madrid. Thanks for your help! Kurt.”

The Madrid meeting was cited in the whistle-blower complaint as a follow-up to Trump’s July 25 call with Zelensky. 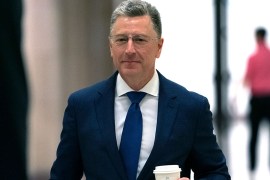 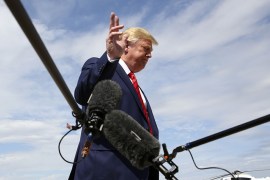 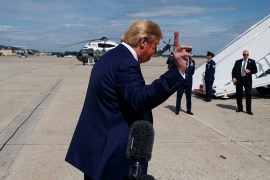 Trump impeachment inquiry: Who do House panels want to depose? 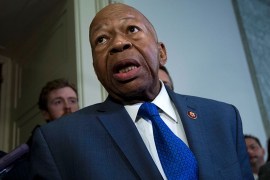 House committee issues notice of legal action seeking all messages and documents from more than 25 officials.