On October 2, 2018, journalist Jamal Khashoggi entered Saudi Arabia’s consulate in Istanbul to obtain documents for his upcoming marriage to his Turkish fiance. The 59 year old never exited the building.

In the days that followed, Turkish officials said Khashoggi, who wrote columns critical of Saudi Arabia’s Crown Prince Mohammed bin Salman (MBS) in the Washington Post, was killed and dismembered by a team of Saudi intelligence operatives.

Riyadh initially denied knowledge of Khashoggi’s fate but later said he was killed in a “rogue operation”.

The murder prompted a global outcry and a United Nations investigation in June said Khashoggi had been a victim of a “deliberate, premeditated execution” for which Saudi Arabia bore responsibility. It also said there was “sufficient” and “credible” evidence linking MBS to the murder.

The crown prince, in an interview aired on Sunday, denied claims he ordered the killing but said he bears responsibility as it happened under his watch.

Here’s what you need to know about the murder that shocked the world:

Who was Jamal Khashoggi?

Born in Saudi Arabia’s Medina in 1958, Khashoggi was once close to the kingdom’s royal family and had a reputation as a reformist.

He began his career as a journalist at the English-language Saudi Gazette, covering major events such as the Soviet invasion of Afghanistan.

Khashoggi later worked as a media adviser to Prince Turki bin Faisal, the former head of Saudi Arabia’s intelligence service and the country’s former ambassador to the United States.

In his later years, he became an advocate for women’s rights and freedom of speech in Saudi Arabia. In 2017, he went into self-imposed exile in the US, saying he had been ordered to “shut up”.

There, he began writing a monthly column for the Post, in which he often criticised MBS’s policies, including a harsh crackdown on dissent and the decision to intervene in Yemen‘s war.

In one of his first articles for the Post, Khashoggi lambasted the arrest of Saudi intellectuals under MBS, saying: “Saudi Arabia wasn’t always this repressive. Now it’s unbearable.”

He identified himself as a proud Saudi patriot and rejected the label of dissident.

What did MBS think of Khashoggi?

The New York Times, in a February report, said MBS told a top aide in a conversation in 2017 that he would use a “bullet” on Khashoggi if he did not return home and end his criticism of the Saudi government.

Citing former US and foreign officials with direct knowledge of intelligence reports, the Times said MBS also complained to another aide that Khashoggi had grown too influential and that his articles and Twitter posts were tarnishing the crown prince’s image as a forward-thinking reformer.

When the aide said any move against Khashoggi risked an international uproar, MBS reportedly said Saudi Arabia should not care about the reaction to how it handles its own citizens.

After Khashoggi was killed, US media reported that MBS had described Khashoggi as a “dangerous Islamist” in a phone call with US President Donald Trump’s son-in-law Jared Kushner and then National Security Adviser John Bolton. The call took place shortly after the journalist’s disappearance.

How did Saudi Arabia react to Khashoggi’s killing?

Saudi authorities offered contradictory narratives on Khashoggi’s whereabouts, initially claiming he left the consulate in Istanbul. But as Turkish officials continued to leak evidence of high-level involvement, Riyadh eventually admitted Khashoggi had been killed inside the diplomatic mission.

Days after Khashoggi’s disappearance, MBS told Bloomberg that Khashoggi had left the consulate after “a few minutes or one hour”.

On October 20, the kingdom’s public prosecutor issued a statement, saying Khashoggi was killed in a fistfight and that 18 Saudi nationals had been arrested. The statement did not mention where his body was.

Five days later, the public prosecutor said Khashoggi’s murder was “premeditated”, reversing previous statements that the killing had been unintended.

In November, Shaalan al-Shaalan, the deputy public prosecutor, said Khashoggi was murdered after “negotiations” for his return to the kingdom failed.

Khashoggi died from a lethal injection and his body was dismembered and taken out of the building, al-Shaalan said, adding that the killing was ordered by the head of a negotiating team sent to repatriate the journalist.

Saudi authorities have since charged 11 unnamed suspects over Khashoggi’s murder, including five who could face the death penalty on charges of “ordering and committing the crime”. Riyadh has also resisted Turkish pressure to extradite the suspects.

Who were the members of the hit squad?

According to Turkish intelligence officials, 15 Saudi intelligence operatives flew to Istanbul on two private jets hours before Khashoggi was killed.

Most of them worked in the Saudi military, security or intelligence services, including at the royal court. They included a forensic expert, Salah al-Tubaigy, who worked at the Saudi interior ministry’s criminal evidence department. He is believed to be the one who dismembered Khashoggi’s body.

Following the killing, Moustafa al-Madani, another intelligence officer at the Royal Palace, donned Khashoggi’s clothes and left through the back door of the consulate in an attempt to make it look like the journalist had walked out of the building.

Saudi authorities have also blamed two prominent officials – who were not part of the group that flew out to Istanbul – for the “rogue operation”. The men are Saud al-Qahtani, royal adviser and MBS’s right-hand man, and General Ahmed al-Asiri, Saudi Arabia’s deputy intelligence chief.

Both men were sacked from their posts. Al-Asiri is on trial for the murder, according to the UN inquiry, and had told a Saudi court in January that he had ordered the team to convince Khashoggi to return home, but had never ordered the use of force.

Al-Qahtani’s whereabouts are not known.

How was Khashoggi killed?

Gruesome details of what happened to Khashoggi have been revealed by Turkish media as well as the investigation by the UN rapporteur on extrajudicial executions.

Their accounts, based on intelligence recordings from inside the consulate, show Khashoggi’s killers discussing how to dismember and transport a body. Minutes before he entered the building, one of the members of the hit team asked if the “sacrificial animal” had arrived.

The journalist was pulled by the arm into the consul-general’s office on the second floor, according to the audiotapes. Mutreb, MBS’s bodyguard, told Khashoggi he would be taken back to Riyadh and ordered him to leave a message for his son, telling him not to worry if he could not reach the journalist.

Khashoggi refused and was then drugged. His last words before losing consciousness were: “I have asthma. Do not do it, you will suffocate me.”

Around 24 minutes after Khashoggi’s arrival, a sound could be heard in the audiotapes that Turkish intelligence assessed to be a saw as well as the sound of plastic sheets.

Khashoggi’s remains are yet to be found.

How did the world react?

Khashoggi’s killing has provoked widespread revulsion, with human rights groups and press freedom advocates calling for MBS and the Saudi government to be held accountable.

Turkish President Recep Tayyip Erdogan called it a “savage” and “political murder“. On Sunday, he pledged to continue “efforts to shed light” on the murder.

Trump has called the murder “terrible”. But highlighting Riyadh’s support for Washington’s policies on Iran and Syria, as well the US’s multi-billion dollar arms sales to Riyadh, he pledged to “remain a steadfast partner of Saudi Arabia”. While the CIA reportedly believes that MBS ordered the killing, Trump said: “Maybe he did, maybe he didn’t.”

Agnes Callamard, the United Nation’s extrajudicial investigator, said Khashoggi’s death “constituted an extrajudicial killing for which the Kingdom of Saudi Arabia is responsible”.

In a 100-page report published in June, Callamard said she “determined that there is credible evidence, warranting further investigation of high-level Saudi officials’ individual liability, including the crown prince’s”.

She dismissed the Saudi trial for the 11 suspects as a sham, saying they fall short of international standards and should be open to the public and trial observers. 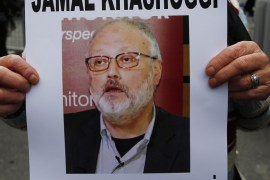 Yasin Aktay says Ankara seeks justice for Khashoggi, as Turkish state is responsible for security on its soil.

President Erdogan said Turkey continued to see Saudi Arabia as an ally but Ankara would not remain silent. 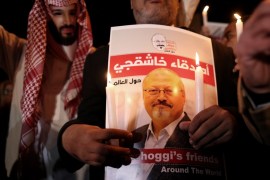 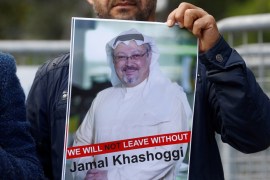