It rained all day on Sunday in Port Blair in South Andaman Island, as the remnants of cyclone Pabuk spread over the Andaman and Nicobar Islands.

Pabuk was already unusual in being the first cyclone to make landfall in Thailand in 30 years, but maybe more unusually, the first ever recorded in the Gulf of Thailand in January.

January, February and March are climatologically dry months for most of Southeast Asia and many holiday-makers escape the European winter cold for just such a warm and sunny environment. Pabuk has ruined that hope for a few days.

It has been raining in Sittwe and Mandalay, both in Myanmar, since Monday afternoon. It started in the borderlands of Thailand, Laos and China early on Tuesday.

It is so unusual that, for example, in the Chinese city of Mengla, on the border with both Myanmar and Laos, the 88mm of rain that has fallen so far make up more than the expected rainfall for the first six months of the year.

All the moisture sucked up by Pabuk from the Gulf of Thailand and the Andaman Sea is now caught up in the general flow of the higher atmosphere.

In contrast to the gentle surface breeze, this flow is a fast southwesterly jetstream in the skies above. A pall of cloud and rain has already spread with it across Myanmar, northern Thailand and Laos, southwest China and northern Vietnam. It is forecast to reach Shanghai by Thursday.

Because this whole area is usually dry in January, for many places the accompanying day or two of rain is the equivalent of typically between four and eight times the average for the whole of January.

Chiang Rai in northern Thailand should be reliably dry – this is the time for honeymooners to come to Thailand – and yet 38mm of rain fell on Tuesday.

January’s average is 7.5mm. Chiang Mai, further south but still in northern Thailand lists a mere 4.2mm of rain in a usual January. On Tuesday, as the rare thunder rumbled, 35mm of rain poured down.

Huay Xai, on the Lao side of the upper reaches of the Mekong, records one day with rain in an average January. Well that’s just happened with a surprising 63mm of thundery rain. Buon Neu, also in northern Laos has reported 92mm in 33 hours, and it’s still raining. The average for January is 15mm.

Over these three days, Monday, Tuesday and Wednesday, the forecast total rainfall is somewhere between 100mm and 200mm. That amount would set new records in most places and is likely to cause landslides. 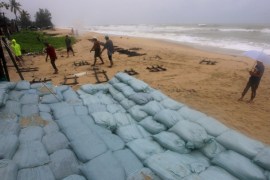 Thailand’s first tropical storm in decades hits the south coast, knocking down trees and blowing off roofs in its path. 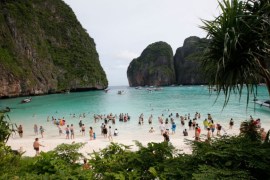