The new US House of Representatives, which is now controlled by Democrats, has approved legislation to end a two-week partial government shutdown without funding President Donald Trump‘s proposed wall along the border with Mexico.

The lower chamber on Thursday – the 13th day of the shutdown – passed six bills to fund the government for 2019 and an additional bill to fund the Department of Homeland Security through February 8.

However, the impasse is likely to remain as the Republican-controlled Senate is expected to block the legislation amid veto threats by the White House.

Following a meeting between Trump and top congressional leaders on Wednesday, Senate Majority Leader Mitch McConnell said the body would not take up the Democratic legislation because Trump wouldn’t sign it.

But the new House speaker, veteran Democrat Nancy Pelosi, stood firm shortly before Thursday’s vote, saying no funding for a border wall would be made available.

Pelosi also took a shot a Trump, calling his proposal “a wall between reality and his constituents”.

Thursday marked the first day of divided government in Washington since Trump took office in January 2017.

The president strode into the White House briefing room on Thursday and declared that “without a wall, you cannot have border security”. He then left without taking any questions.

The previous day, he had told reporters that the shutdown could last a “long time or could be [done] quickly”, adding that the wall is “too important of a subject to walk away from”. He said he would wait “as long as it takes” to get the $5.6bn he has demanded.

‘I would look foolish’

“I said, ‘Mr President, give me one good reason why you should continue your shutdown’,” Schumer told reporters. “He could not give a good answer.”

According to US media, citing officials familiar with the talks, Trump at one point told Democrats that he would “look foolish” if he backed down from his demand. Talks are expected to resume on Friday.

Trump says the wall is crucial to curbing irregular immigration. Democrats disagree, with Pelosi calling the wall immoral, ineffective and expensive. Trump repeatedly said during his presidential campaign that Mexico would pay for the wall, but Mexico has refused and US taxpayers likely will be left footing the bill.

The Democratic package to end the shutdown included one bill to temporarily fund the Department of Homeland Security at current levels – with $1.3bn for border security, far less than Trump has said he wants for the wall – through February 8 as talks continue.

It also included a separate measure to fund the departments of agriculture, interior, housing and urban development and others closed by the partial shutdown. The measure would provide money through the remainder of the fiscal year, to September 30.

The Democratic package puts Trump and his Republican allies in a tough position. If they reject funding bills for departments unconnected to border security, Republicans could be seen as holding those agencies and their roughly 800,000 affected workers hostage to Trump’s desire to build a wall.

More than half are working without pay, while the rest are furloughed.

On Wednesday, the Smithsonian museums and National Zoo in Washington, DC, closed due to the shutdown. 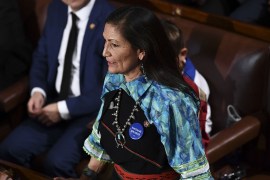 New US Congress makes history with record number of women

From the youngest woman to the first Muslim female representatives, no other US Congress has looked like this. 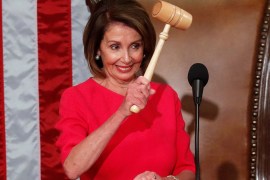 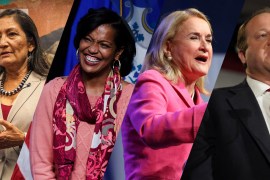