The United States, along with several other countries, have recognised Guaido as Venezuela’s legitimate head of state and denounced leftist President Nicolas Maduro as a usurper.

Maduro, sworn in earlier this month for a second term after last year’s disputed elections, accuses Guaido of staging a US-directed coup against him.

On Tuesday, Attorney General Tarek Saab said on state television he asked the court “to open a preliminary investigation into Guaido as a result of diverse violent occurrences provoked in this country since January 22” – the day before Guaido named himself president.

As a legislator who also heads the National Assembly, Guaido has immunity from criminal investigation that can be removed only by the Supreme Court.

Minutes after the announcement, Guaido said he was not underestimating a threat of imprisonment but did not believe it was “anything new”.

“We are here, we will keep acting and working to confront the humanitarian crisis,” he told a news conference in Caracas.

The US, Brazil, Canada, Colombia, Argentina, Peru, Ecuador and Paraguay have officially acknowledged Guaido as the legitimate interim head of Venezuela, while Russia, Iran, Turkey and China, among many other countries, back Maduro.

Inside Venezuela, Maduro holds the reins with the armed forces still loyal to him despite an opposition push to gain their support by proposing amnesty for anybody who supports Guaido’s transitional government.

Maduro has accused the US of leading an open coup against him to exploit Venezuela’s oil reserves, the largest in the world.

Some analysts agree with the government’s view.

“[The White House is attempting to oust President Maduro for] the same reason there were some intents on ousting president Chavez in 2002 or Maduro in 2014,” Peter Dobson, a Venezuelan political analyst, told Al Jazeera.

“One simple word: Oil. The control of the oil resources in Venezuela, as well as the diamonds, gold, water, gas and a whole range of natural resources, is massively important for the US, and [their] geostrategic interests across the world,” he added.

Last week, US Secretary of State Mike Pompeo signed off on the order for Guaido to control holdings in the Federal Reserve Bank of New York and federally insured banks, the State Department said.

The move is expected to block $7bn in assets and result in $11bn of lost export revenue over the next year.

“If the only source of [foreign] income comes from PDVSA, with these new measures, the income will decline. This will imply that the supply of dollars will decrease and the demand will be maintained,” Carlos Eduardo Pina, a Venezuelan political scientist, told Al Jazeera.

“This will mean the exchange rate will increase a lot more, leading to inflation. If measures are not taken soon, inflation will continue to rise, generating a great discontent among the population,” Pina added.

China has also loaned Venezuela more than $50bn through oil-for-loan agreements over the past decade, securing energy supplies for its fast-growing economy.

On Tuesday, China’s foreign ministry criticised the US sanctions.

“Experience has proven that external interference or sanctions will only complicate the situation and will not help solve practical problems,” foreign ministry spokesman Geng Shuang said at a regular media briefing on Tuesday.

US calls on countries to ‘pick a side’ in Venezuela crisis

Russia accuses US of orchestrating a ‘coup’ attempt, as US secretary of state urges support for opposition leader. 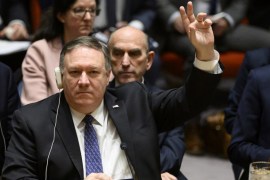 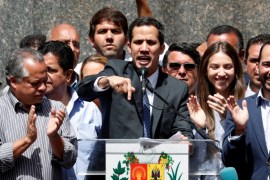