Philippine President Rodrigo Duterte has blamed two suicide bombers from the armed Abu Sayyaf group, for carrying a deadly attack inside a Catholic church in the southern island of Jolo.

“Yes, we are sure of that. Nobody… but nobody can perpetuate that kind of terrorism thereabouts in that area. I have no doubt,” Duterte told reporters in the capital, Manila, on Tuesday.

He said a husband and wife team of suicide bombers carried out Sunday’s twin bombings, contradicting reports by the military that said that a woman had placed a bag of explosives in one of the church pews before fleeing from the scene.

“That is what the military told me, and that is what the police relayed to me. And I am guided by what the government workers would tell me,” Duterte said in a mix of Filipino and English.

On Tuesday, another victim of the attack died in the hospital, taking the death toll to 21.

In an earlier statement issued by the presidential palace, Duterte was quoted as ordering the military to “destroy” the Abu Sayyaf “by whatever means”.

The island of Jolo has long been known as a domain of the Abu Sayyaf fighters, who in recent years have pledged allegiance to the Islamic State of Iraq and the Levant (ISIL, also known as ISIS) group.

The Abu Sayyaf has not issued a statement on the incident, but the ISIL claimed on its website that it was responsible for the attack.

On Tuesday, the military pleaded with residents of Jolo to help authorities track down the suspects of the bombing.

“If you see someone doing wrong, you should turn them in to (the) authorities,” said Colonel Gerry Besana, a regional military spokesman.

“But people don’t, maybe because they are relatives, or they also benefit from the crimes.”

He said the authorities are looking for a total of six “persons of interest”, including a female suspect.

One of the men in the footage, wearing a blue-green jacket, was identified as Kamah, brother of slain Abu Sayyaf leader Surakah Ingog.

Kamah was believed to have been holding a mobile phone that was used to trigger the bombs, Besana said.

Security forces have received intelligence reports of a possible bomb attack against churches in Jolo and nearby areas since August 2018, said Defence Secretary Delfin Lorenzana.

“Since then, the Jolo cathedral was guarded by soldiers 24 hours a day,” he said.

“We will never know how the bombers got in or near the church as the soldiers guarding the main door all died.”

The twin bombings were the worst attack in the Philippines in recent years. 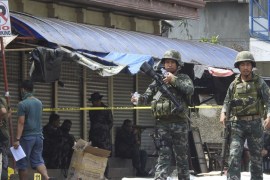 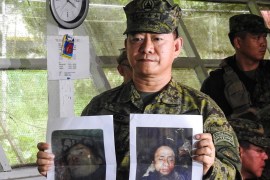 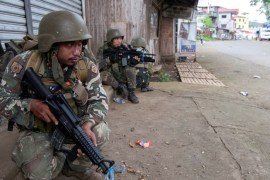 Badong Muktadil was accused of highjacking a Vietnamese vessel, kidnapping, and murder on the sea border with Malaysia.