French President Emmanuel Macron has said that he told his Egyptian counterpart Abdel Fattah el-Sisi during a visit to Cairo that stability and security could not be separated from human rights.

The two leaders met on Monday in the capital, Cairo, to oversee the signing of around 30 deals between Egypt and France worth several hundred million dollars.

“Stability and durable peace go together with respect for individual dignity and the rule of law, and the search for stability cannot be dissociated from the question of human rights,” he said during a joint press conference with Sisi.

“Macron is seeking to advance French interests in Egypt and in Africa – everything else is beside the point, especially his conversation about human rights,” he said.

“While it’s commendable that Macron would say the human rights record in Egypt is deteriorating … none of the words and declarations he put out there are actionable.”

Shortly after his arrival in Egypt on Sunday, Macron said he would talk “more openly” with Sisi on human rights.

“Things have got worse since October 2017” when Sisi visited Paris, said Macron, referring to the human rights situation in the north African country.

Sisi’s government is seen by civil society as “more hardline than the regime of [Hosni] Mubarak”, he said, referring to the longtime president who was deposed during 2011 Arab Spring uprising.

“My line is: Stability and respect for sovereignty. But what is happening here threatens” Egypt’s stability, Macron said.

Sisi told reporters on Monday that rights should be taken in the context of regional turbulence and the fight against terrorism.

“We’re not like Europe, nor the United States, we are a country or a region that has its own characteristics,” said Sisi.

“Egypt does not advance through bloggers. It advances through the work, effort and perseverance of its sons.”

The state has since arrested thousands of dissidents, including activists and journalists, as well as Muslim Brotherhood supporters. Egypt has also been accused of arbitrary detention, disappearances and torture, and has silenced most independent media.

In an interview this month Sisi denied Egypt was holding political prisoners, though one rights group estimates the number at 60,000.

Authorities say they are fighting terrorism and trying to restore stability after years of unrest.

Macron said that too many ordinary people “who do not threaten the regime’s stability” have been jailed.

Rights groups and activists have urged France and other Western powers to halt weapons sales to Egypt, a major purchaser, until it improves its human rights record. But Macron dismissed suggestions that French weapons in Egypt were being used against civilians, saying they had only been used for military purposes.

He also said no potential new military contracts were talked about during the meeting with Sisi beyond a possible deal for 12 fighter jets.

The two had met in 2017, when rights groups demanded Macron raise allegations of torture and political repression in Egypt. Back then, Macron said it was not up to him to “lecture” Egypt on civil liberties.

French officials say Egypt is a key strategic partner for promoting stability and security in the region, including in Libya, which Macron has put at the top of his foreign policy agenda.

According to Bishara, the French leader also tried to discuss the future of Libya with Sisi, “especially the future of renegade general Khalifa Haftar” as well as the security situation on the Libya-Chad border.

Macron is expected to end his three-day visit on Tuesday.

Other deals signed include French support for social policies and female entrepreneurship, and a memorandum of understanding for the expansion of Cairo’s metro. 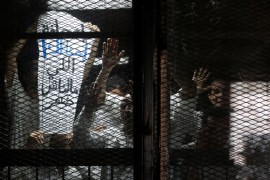 Rights group says Egypt ‘more dangerous than ever’ for critics

At least 113 Egyptians were detained in 2018 for peacefully criticising the government, says Amnesty International.