Thousands of impoverished Gazans received $100 payments from Qatar on Saturday, the AFP news agency reported, after the Gulf state brought in over nine million dollars in aid funds for the Palestinian territory.

Hundreds of people queued at post offices in the Gaza Strip to each collect a $100 bill.

Palestinian media earlier quoted the Qatari ambassador to Gaza as saying the money would go to Gaza’s poor.

“The Qatari grant for needy families will enter Gaza Saturday and be distributed … to 94,000 families,” Mohammed al-Emadi was quoted as saying.

Half the funds would be distributed Saturday and the rest Sunday, he said, with each family receiving $100.

Emadi was not immediately available to confirm the arrangement.

Qatar had pledged to send $15 million to Gaza monthly as part of an informal agreement between Israel and Gaza’s Islamist governing party, Hamas, reached in November.

Under that deal, Israel allowed the grants to go through its territory in exchange for relative calm on the Gaza border.

Most of the funds were to have been used to pay the salaries of Hamas civil servants but around five million dollars monthly was for impoverished Gazans.

The status of the funds has been a major dispute this week as Hamas refused to accept them, saying Israel was seeking to change the deal.

Qatar announced Friday that they would now use the finance for humanitarian projects in coordination with the United Nations. 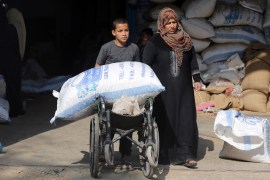 Qatar to disburse millions in Gaza aid with UN help 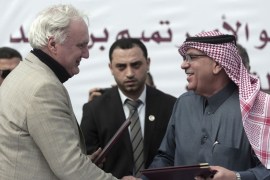 Israeli media says security cabinet has agreed to permit the money to be brought to Gaza after temporarily blocking it.