Venezuela‘s President Nicolas Maduro has called home all Venezuelan diplomats from the United States and closed its embassy and consulates there after the US declared his government “illegitimate”.

He also ordered all US embassy personnel out of Venezuela by the weekend, but on Thursday Washington refused to comply with a full expulsion, only ordering non-essential staff to leave.

Venezuela was plunged into uncertainty on Wednesday when Juan Guaido, the 35-year-old head of the National Assembly, proclaimed himself “acting president” – earning a swift endorsement from the US and a dozen regional powers, including Brazil, Argentina and Colombia.

In a speech broadcast on state television on Thursday, Maduro accused the US of leading a “major provocation against Venezuela”.

“They believe they have a colonial hold in Venezuela, where they decide what they want to do,” Maduro said.

He gave US embassy staff until Sunday to leave the country saying that he had “decided to break diplomatic and political relations with the imperialist government of Donald Trump and expel all his diplomatic and consular staff of Venezuela”.

But Washington said it was ignoring the order as it no longer recognised Maduro as Venezuela’s legitimate president.

The State Department said it would maintain diplomatic ties with the country “through the government of interim President Guaido”.

World powers, including Russia and China, have criticised the US interference and backed Maduro’s government.

Meanwhile, all eyes were on Guaido whose whereabouts have been unknown since he was symbolically sworn in on Wednesday before tens of thousands of cheering supporters, promising to uphold the constitution and rid Venezuela of Maduro’s government.

Speaking from an undisclosed location, Guaido told broadcaster Univision he would consider granting amnesty to Maduro and his allies if they would step aside.

“Amnesty is on the table,” said Guaido, who just weeks earlier was named the head of the opposition-controlled Congress.

Besides the US, much of the international community has rallied behind Guaido, with Canada and numerous Latin American and European countries announcing that they recognised his claim to the presidency.

President Donald Trump promised to use the “full weight” of the US’s economic and diplomatic power to remove Maduro from power. When asked about the possibility of military action on Wednesday, he told reporters: “We are not considering anything, but all options are on the table.”

Maduro has been increasingly accused of undemocratic behaviour by his opponents and has presided over skyrocketing inflation, a collapsing economy and widespread shortages of basic goods.

China’s Foreign Ministry called on the US to stay out of the crisis, while Russian President Vladimir Putin called Maduro to express support, charging that the “crisis has been provoked from the outside”.

Russia’s deputy foreign minister has also warned the US against any military intervention in Venezuela.

Diplomats at the Organization of American States held an emergency meeting on Thursday on the Venezuelan crisis, during which 16 nations recognised Guaido as interim president.

Domestically, attention has been on Venezuela’s military, a traditional arbiter of political disputes in the country, as a critical indicator of whether the opposition will succeed in establishing a new government.

“It’s not a war between Venezuelans that will solve our problems,” he said. “It’s dialogue.”

Following Padrino’s lead, eight generals in turn reiterated their “absolute loyalty and subordination” to the socialist leader in messages carried on state television.

And the Supreme Court doubled down by reaffirming its allegiance to Maduro’s “legitimate authority”.

“A coup is brewing in Venezuela with the consent of foreign governments,” charged the court’s president Maikel Moreno.

Analysts at the Eurasia Group consultancy noted that while international recognition of Guaido as Venezuela’s interim president cemented his position as the main opposition leader, he had failed to win over senior elements of the military.

In that light, “Maduro’s fall does not appear imminent,” the analysts wrote.

Leading figures around the world have appealed for calm to avoid a repeat of the bloodshed – as a Caracas-based NGO, the Social Conflict Observatory, said 26 people had been killed since the latest protests began four days ago.

Speaking at the World Youth Day in Panama, Pope Francis’s spokesman said he was “praying for the victims and for all the people of Venezuela”.

United Nations Secretary-General Antonio Guterres, speaking at the World Economic Forum in Davos, appealed for dialogue to keep the crisis from spiralling out of control.

About 2.3 million people have fled the country since 2015, according to the UN. Inflation is forecast to hit 10 million percent this year. 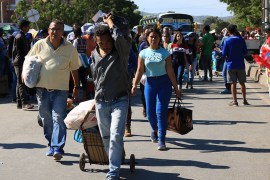