An attack targeting an airport in southeastern Damascus killed four Syrian soldiers and wounded six, the military centre was quoted by RIA news agency as saying on Monday.

Israel’s President Reuven Rivlin said on Monday the attacks were in response to a surface-to-surface rocket that Iranian forces fired towards Israel on Sunday.

During a meeting with Ukrainian President Petro Poroshenko in Jerusalem, Rivlin spoke about the raids and called them “a direct response to the unacceptable missile fire on us,” and added “the international community must understand that the build-up of Iran’s forces in the Middle East could lead the region into escalation”.

The threat of direct confrontation between archenemies Israel and Iran has long simmered in Syria, where the Iranian military built a presence early in the civil war to help President Bashar al-Assad fight rebels seeking to overthrow him.

Israel, regarding Iran as its biggest threat, has repeatedly attacked Iranian targets in Syria and those of allied militia, including Lebanon’s Hezbollah without claiming responsibility for the attacks.

But with an election approaching, and with the United States vowing more action against Iran, Israel’s government has lifted the lid on attacks it once preferred to keep quiet, and has also taken a tougher stance towards Hezbollah on the border with Lebanon.

The Syrian Observatory for Human Rights, a UK-based monitor, said the toll of the raids was 11.

“We have started striking Iranian Quds targets in Syrian territory. We warn the Syrian Armed Forces against attempting to harm Israeli forces or territory,” Israel’s military said in a statement in the early hours of Monday.

The Quds Force is in charge of Iran’s Revolutionary Guards’ overseas operations. Iran is a major backer of Assad and his forces in the country’s long-running war.

In Tehran, air force chief Brigadier-General Aziz Nasirzadeh said Iran was “fully ready and impatient to confront the Zionist regime and eliminate it from the Earth”, according to the Young Journalist Club, a website supervised by state television.

“We are operating both against Iran and against the Syrian forces that are abetting the Iranian aggression,” said Netanyahu. “We will strike at anyone who tried to harm us. Whoever threatens to eliminate us, bears full responsibility.”

“The Israelis will attack. They are convinced that the Iranians are advancing, that they are providing high-powered weapons to Hezbollah. The Israelis definitely think they must do something,” Surkov told Al Jazeera.

Al Jazeera’s Harry Fawcett, reporting from Eilat in southern Israel, said the Israeli military’s confirmation that it was striking targets inside Syria as the operation was ongoing was “highly unusual”.

News agency reports quoted witnesses in the Syrian capital, Damascus, as saying that loud explosions rang out in the night sky.

Video posted to social media purports to show missiles intercepted near the city.

The attacks followed cross-border attacks on Sunday in which Syria said it repelled an Israeli air raid.

Israel said it intercepted a rocket fired at the occupied Golan Heights.

Netanyahu acknowledged an Israeli attack last week on what he called an Iranian arms cache in Syria, where Tehran provides Damascus with vital support.

He told his cabinet Israel had carried out “hundreds” of attacks over the past years of Syria’s war to curtail Iran and Hezbollah.

Usually silent about its attacks on Iranian targets near its frontier, Israel has lifted the veil this month, a sign of confidence in a campaign waged amid occasional tensions with Russia, which is also backing Assad.

Fawcett said there had been speculation that “this lifting of the ambiguity policy may well give the Syrians and the Iranians cause to strike more directly at Israel now that Israel had owned up publicly to what it was doing.”

“It’s too early to say whether this is an instance of that,” he added. 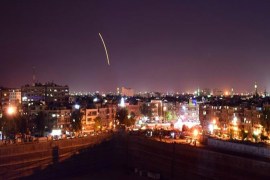 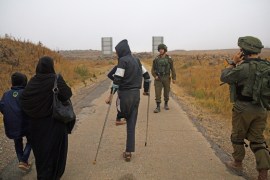 Israel has been taking advantage of some Syrians’ desperation to pursue its political goals. That’s not humanitarianism.