Turkish President Recep Tayyip Erdogan said his country would set up a security zone in northern Syria as suggested by US President Donald Trump as both leaders sought to ease growing tensions.

Addressing his deputies on Tuesday, Erdogan said he held a “quite positive” telephone conversation with Trump late on Monday where he reaffirmed “a 20-mile [32-km] security zone along the Syrian border … will be set up by us”.

Erdogan said he viewed the planned security zone in Syria positively and added its range may be extended further.

The president added he and Trump reached “a historic understanding” during the phone call, but Erdogan didn’t elaborate.

Trump confirmed the idea of establishing a zone around the border in a tweet earlier, referring to the proposed area as a “safe zone”.

The phone conversation came amid heated discussions about a US decision to withdraw forces from Syria and rising tensions over the fate of the US-allied Kurdish fighters in the war-torn country.

Bitter differences between Washington and Ankara over the Kurdish YPG militia had soured talks between the two NATO partners.

Trump threatened on Twitter on Monday he would “devastate” Turkey’s economy if its forces attacked the Kurdish fighters, who helped Washington in its fight against the Islamic State of Iraq and the Levant (ISIL, ISIS).

Erdogan said he was saddened by Trump’s tweet, but the phone call later in the day was positive.

“Turkey will continue to do what it has to in order to solve this issue in line with the spirit of its alliance, so long as our rights and laws are respected,” he said.

Ankara considers the Kurdish People’s Protection Units (YPG) and its political wing – the Kurdish Democratic Union Party (PYD) – to be “terrorist groups” with ties to the banned Kurdistan Workers’ Party (PKK) in Turkey.

For weeks, it has vowed to carry out military operations against the YPG and has condemned the US for its military relationship with the armed group.

The Trump administration has defended its YPG alliance and made the Kurdish fighters’ safety a pre-condition to the US troop withdrawal.

….Likewise, do not want the Kurds to provoke Turkey. Russia, Iran and Syria have been the biggest beneficiaries of the long term U.S. policy of destroying ISIS in Syria – natural enemies. We also benefit but it is now time to bring our troops back home. Stop the ENDLESS WARS!

Turkey’s state-run Anadolu Agency reported during the phone conversation the two leaders also discussed the need to complete a security plan for Syria’s border town of Manbij to prevent a power vacuum once US forces pullout.

Turkish and US troops began joint patrols in Manbij on November 1 as part of an agreement that focuses on the withdrawal of YPG fighters from the city to stabilise the region.

Last month, Trump’s withdrawal announcement surprised many politicians in Washington as well as Western and Kurdish allies fighting alongside the US against the ISIL group.

Trump’s decision was initially expected to be carried out swiftly, but the timetable became vague in the weeks following his announcement. 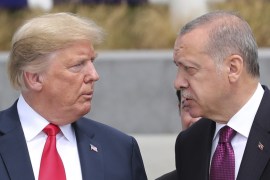 Two leaders discuss situation in Syria over the phone amid growing tensions over the fate of US-allied Kurdish fighters. 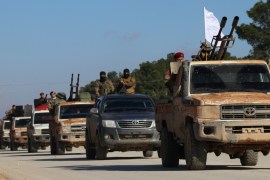 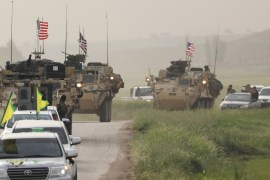 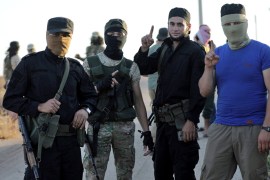