Rahaf al-Qunun, the 18-year-old Saudi woman who fled her family saying she feared for her life, has landed in Canada, after being granted asylum in the North American country.

“This is a very brave new Canadian,” Freeland told reporters, with a smiling al-Qunun standing by her side.

Canadian Prime Minister Justin Trudeau said on Friday that Canada had accepted a request from the United Nations High Commissioner for Refugees (UNHCR) to take in Rahaf Mohammed al-Qunun, who grabbed international attention earlier this week after she barricaded herself in a Bangkok airport hotel room to resist being sent home to her family, which denies any abuse.

Freeland told media that the decision to accept al-Qunun’s request was part of Canada’s “policy of supporting women and girls around the world.”

“It’s obvious that the oppression of women is not a problem that can be resolved in a day, but rather than cursing the darkness we believe in lighting a single candle,” she said. “Where we can save a single woman, a single person that’s a good thing to do.”

Al-Qunun took to Twitter to thank those who had helped her. “I would like to thank you people for supporting me and saiving [sic] my life,” she wrote.

I would like to thank you people for supporting me and saiving my life. Truly I have never dreamed of this love and support
You are the spark that would motivate me to be a better person❤️❤️❤️🗽

“This was all arranged in an absolute rush with the UNHCR getting directly involved, approaching the Canadians, the Canadians coming through very quickly with the decision to grant her asylum,” Hanna said.

Al-Qunun had arrived in Bangkok on January 5 and was initially denied entry, but she soon started posting messages on Twitter from the transit area of Bangkok’s Suvarnabhumi airport saying she had “escaped Kuwait” and her life would be in danger if forced to return to Saudi Arabia.

Following a 48-hour standoff at Bangkok airport, some of it spent barricaded in a transit lounge hotel room, she was allowed to enter Thailand and was then processed as a refugee by the UN’s refugee agency.

The UNHCR welcomed Canada’s decision and also acknowledged Thailand had given al-Qunun a temporary refuge.

“Ms al-Qunun’s plight has captured the world’s attention over the past few days, providing a glimpse into the precarious situation of millions of refugees worldwide,” UN High Commissioner for Refugees Filippo Grandi said in a statement.

Al-Qunun has accused her family of abuse and has refused to meet her father and brother who arrived in Bangkok to take her back to Saudi Arabia.

“It was her wish to go to Canada,” Thailand’s immigration chief Surachate Hakparn told reporters this week. “She still refuses to meet her father and brother, and they are going to be travelling back tonight as well … They are disappointed.”

Her case has drawn global attention to Saudi Arabia’s strict social rules, including a requirement that women have the permission of a male “guardian” to travel, which rights groups say can trap women and girls as prisoners of abusive families.

A Korean Air flight carrying al-Qunun left Bangkok for Seoul on Friday night at 11:37pm local time (16:37 GMT), where she caught a connecting flight to Toronto.

Trudeau brushed off a question as to whether Canada’s move might make it harder to repair ties with Saudi Arabia.

“Canada has been unequivocal that we will always stand up for human rights and women’s rights around the world,” he said.

Amid increasing domestic political pressure, Trudeau said last month that his Liberal government was looking for a way out of a multibillion-dollar arms deal with Riyadh.

Al-Qunun’s flight has emerged at a time when Riyadh is facing unusually intense scrutiny from its Western allies over the killing of journalist Jamal Khashoggi at the Saudi consulate in Istanbul in October and over the humanitarian consequences of its war in Yemen.

Canada has repeatedly said Khashoggi’s murder was unacceptable and has demanded a full explanation. 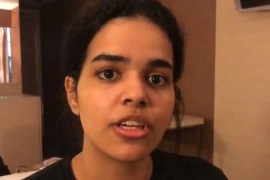 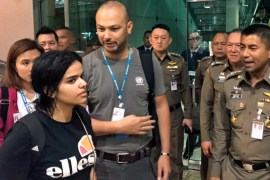 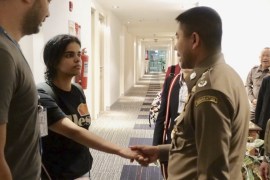 One step closer to Australia for Saudi teen Rahaf al-Qunun

Canberra confirms Rahaf Mohammed al-Qunun has been referred to Australia by UNHCR as a legitimate refugee.