Felix Tshisekedi has vowed to be the president “of all Congolese” after the Democratic Republic of Congo‘s (DRC) electoral commission declared him the winner of the country’s long-delayed elections.

The result, which was announced in the early hours of Thursday, was rejected by rival Martin Fayulu, who was backed by opposition heavyweights and had led in polling prior to the December 30 vote.

Tshisekedi had won with 38.57 percent of more than 18 million ballots cast, Corneille Nangaa, head of the election commission said at about 3am (02:00 GMT) in a news conference that appeared timed to avoid any immediate reaction on the streets.

Tshisekedi received more than seven million votes compared with about 6.4 million for Fayulu, who had warned against manipulation.

The announcement came hours after the riot police were deployed at the commission’s headquarters in Kinshasa amid fears of violence due to a disputed result.

The Catholic Church said on Thursday the poll results announced by the electoral commission did not match its vote tally.

The African Union called for any dispute over the election to be resolved through dialogue.

“It is important that any disagreement over the proclaimed results, notably that they did not reflect voters’ wishes, be resolved peacefully, by turning to the relevant laws and through political dialogue between the parties involved,” Moussa Faki Mahamat, head of the AU, said in a statement.

Losing candidates can contest the results before the country’s constitutional court in the coming days. The swearing-in of the new president is planned for January 18.

Some observers have suggested that Kabila’s government sought to make a deal as hopes of a win for Shadary faded.

The result is expected to cause further suspicion that Tshisekedi struck a power-sharing pact with Kabila. Tshisekedi’s camp has acknowledged contacts since the vote with Kabila’s representatives but denies there has been any kind of deal.

Speaking to thousands of cheering supporters in Kinshasa, Tshisekedi paid his respects to Kabila, whom he described as “an important political partner”.

“He said he is willing to be a president for all the people of Congo and thanked Fayulu and Shadary, saying he is willing to work with them to build a better Congo,” Al Jazeera’s Haru Mutasa, reporting from Kinshasa, said.

“The results have nothing to do with the truth of the ballot box,” he said in an interview with Radio France Internationale, calling on observers to publish the real results.

Tshisekedi, 55, is the son of the late Etienne Tshisekedi, the face of the DRC’s opposition for decades.

He has promised a return to the rule of law, to fight the “gangrene” of corruption and to bring peace to the conflict-wracked east of the resource-rich country.

More than one million people were kept from voting on election day because of an Ebola outbreak and militia violence in opposition strongholds, mainly in DRC’s east. 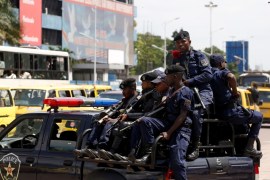 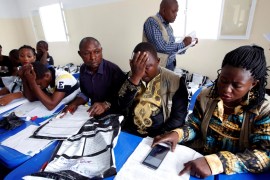 Congo-based SYMOCEL says it had witnessed 52 ‘major’ irregularities in the 101 of 179 vote-counting centres it observed. 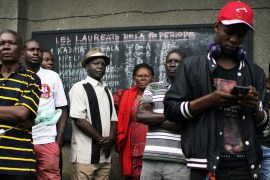