Separate attacks in Somalia have targeted a US special forces base in the town of Baledogle and a European military convoy in the capital, Mogadishu.

The al-Shabab armed group claimed responsibility for Monday’s attack at the Baledogle base located in the Lower Shabelle region, about 100km (60 miles) west of Mogadishu.

No immediate casualties from the attack, which involved twin vehicle-borne bombs, were reported.

“Two heavy explosions occurred, the first one bigger than the other. There was also a heavy exchange of gunfire after the blasts,” Mohamed Adan, a Somali elder close to the scene of the attack, told AFP news agency by phone.

Al-Shabab said its fighters stormed the base after using a car bomb to blast through its gates.

“The security forces stopped this ultimately failed attack due to their alertness and swift response, not allowing the attackers to breach the outer defensive perimeters of the base,” the mission said in a statement.

“We are thankful that there were no SNA (Somali National Army) casualties between the multiple attacks.”

The US Africa Command carried out two air raids and used small arms fire targeting al-Shabab fighters in a counterattack, killing 10 “terrorists” and destroying a vehicle, according to a command statement.

“This attack, though ineffective, demonstrates the direct threat al-Shabab poses to Americans, our allies, and interests in the region,” said Major General William Gayler, US Africa Command director of operations.

The Baledogle base functions as a training camp for Somali soldiers.

Al Jazeera’s Malcolm Webb, reporting from neighbouring Kenya, said the base was being used to carry out drone attacks on al-Shabab, which seeks to topple Somalia’s Western-backed central government.

In a separate incident on Monday, a security official said European Union advisers training Somali soldiers were attacked in Mogadishu.

“There was a car bomb targeting the EU military advisers along the industrial road. A vehicle loaded with explosive was rammed onto one of the convoy vehicles and there are casualties,” Omar Abikar, a Somali security officer, told AFP.

A statement from the EU Training Mission in Somalia confirmed the convoy had been “hit by an explosion” while returning from the army headquarters.

“No EUTM-S soldiers were injured in the explosion. Two vehicles sustained damage,” it said.

Italy’s defence ministry said in a statement that two armoured vehicles in an Italian convoy “were involved in an explosion,” adding: “For the instant, there have been no consequences for Italian soldiers.”

Al Jazeera’s Webb added that an improvised device was used to target the Italian convoy, which has been guarding the EU team.

The EU has been training the Somali army, among other activities, he said.

The mission offers military advice and provides training to Somalia’s army, currently still propped up by some 20,000 African peacekeepers as the country tries to recover from decades of civil war.

“The attack happened as Mogadishu was under a lockdown due to a high-level meeting at the UN headquarters. And it’s believed the convoy may have been coming to or from that meeting,” Webb said, reporting from Nanyuki.

Al-Shabab was ejected from Mogadishu in 2011 and has since been driven from most of its other strongholds. However, it still carries out frequent attacks across Somalia, as well as in Kenya, whose soldiers form part of the African Union-mandated peacekeeping force that helps defend Somalia’s central government. 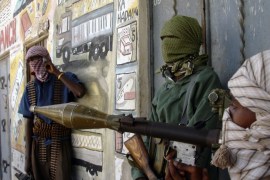 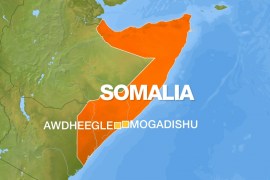 Government-run base in Awdheegle, in Lower Shabelle region, hit by car bombs and gunfire. 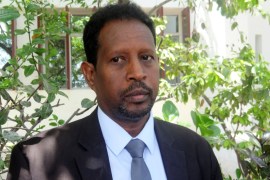 Mayor Osman was being treated in Qatar after last month’s suicide attack inside his office in Somalia’s capital.