At least two people were reported killed and 32 others injured when a riot between rival gangs broke out in the Manila City Jail in the capital of the Philippines, authorities said on Monday.

Prison authorities told reporters that violence between the Sputnik Gang and Batang City Jail gang, erupted on Sunday, forcing the Manila City Jail to be sealed off.

Manila jail official Jayrex Bustinera told reporters that the fight was sparked by an argument between two inmates.

Several of those who were injured were taken to a government hospital in the city, while others were treated at the jail’s medical facility.

Manila City Jail’s prisoner capacity is about 1,100. But as of the end of 2018, there were an estimated 6,300 inmates crowded into the facility.

According to an Al Jazeera report in 2018, the jail’s prison guard to prisoner ratio was one to 200, compared with an international standard of one guard to seven inmates.

The number of prisoners across the country has increased exponentially since President Rodrigo Duterte implemented his so-called “war on drugs” in mid-2016.

Since Duterte assumed the presidency, anti-drug operatives have arrested 240,565 suspected drug offenders, while almost 1.3 million have surrendered, according to a June 2019 report published by the Philippine National Police.

During the same period, some 6,600 people were killed during drug-related operations, although rights advocates say the number could be upwards of 27,000.

In recent weeks, the Philippine prison system also came under scrutiny after it was revealed that the Duterte administration approved the release of more than 1,700 inmates, including many drug convicts, as a reward for good behaviour under a law passed in 2013.

However, current and former prison officials, as well as members of Congress, revealed that many of the prisoners were released after paying bribes.

Amid a fierce backlash, Duterte reversed his decision on the release but also invited more controversy when he offered a reward equivalent to $19,000 (one million pesos) for the capture of each offender.

He also said that it would be a “better option” if the offenders were dead. 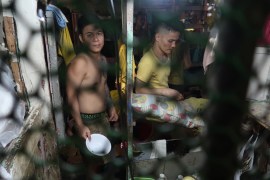 Locked up: Inside Manila City Jail

Al Jazeera investigates what life is like inside one of the world’s most congested jails. 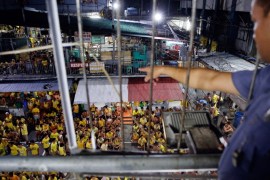