Egypt is bracing itself for a second weekend of protests on Friday, with authorities stepping up arrests and tightening security in major cities amid calls for a “million-man march” against President Abdel Fattah el-Sisi.

Egypt’s Ministry of Interior warned on Thursday of “decisive” action against any attempts to “destabilise peace” as rights groups say nearly 2,000 people have been arrested since last weekend’s rare protests demanding el-Sisi quit.

Among those arrested was Hassan Nafaa, a political science professor at Cairo University and well-known columnist, who called for the president’s departure in a Twitter post.

“I have no doubt that the continuation of el-Sisi’s absolute rule will lead to disaster,” Nafaa said. “Egypt’s interest requires his departure today before tomorrow.”

Nafaa’s arrest on Wednesday followed the detention of Hazem Hosny, a spokesman for former army chief Sami Anan who was jailed last year for attempting to run against el-Sisi in a presidential election.

Khaled Dawoud, the head of Al-Doustor Party who has been a vocal critic of the president’s policies, was also arrested.

Last weekend’s unprecedented display of dissent is a response to calls for action from a former Egyptian military contractor, Mohamed Ali. The part-time actor, who said he worked with the military for 15 years, accused el-Sisi and his aides of squandering public funds on vanity projects despite widespread poverty.

In a series of videos posted online, he admitted to benefitting from government corruption, describing how his company, Amlak, was awarded lucrative state contracts without going through the proper bidding process.

Ali, who lives in self-imposed exile in Spain, said he regretted being part of the rampant corruption among the army corps and el-Sisi’s relatives, including his wife Entissar Amer.

His description of opulent palaces and luxury hotels that he claimed to have built for el-Sisi – and for which he has yet to be paid – struck a nerve with many Egyptians living under harsh austerity measures imposed under a $12bn loan deal with the International Monetary Fund.

The programme has led to an increase in poverty rates. Official figures show one in three Egyptians live below the poverty line.

In a new video on Thursday night, Ali called on Egyptians to take to the streets following the noon prayers on Friday. He urged protesters not to clash with security forces and said they should march in side streets. Tahrir Square, the hub of the 2011 uprising that brought down longtime ruler Hosni Mubarak, should not be the main focus of Friday’s protests, he added.

“All the squares in Egypt are Tahrir squares,” he said.

El-Sisi, who is due back in Cairo on Friday following a trip to New York to attend the United Nations General Assembly (UNGA), has previously dismissed Ali’s allegations as “lies and slander”.

Since leading the military’s overthrow of democratically-elected President Mohamed Morsi in 2013, el-Sisi has overseen a broad crackdown against any dissent.

While members of the Muslim Brotherhood – to which Morsi belonged – were the main target of a heavy-handed approach to political dissent, arrests extended well beyond the group. Civil rights activists, journalists, and actors have also been targeted.

When asked about the demonstrations on Monday, el-Sisi blamed them on “political Islam”.

Meanwhile on Twitter, hashtags such as “come out you are not alone“, “you are done Sisi“, “Sisi must go“, and “Next Friday“, translated from Arabic, generated tens of thousands of tweets and retweets calling on people to take to the streets peacefully on Friday to demand el-Sisi step down.

Egyptian Hollywood actor Amr Waked posted in Arabic to his almost seven million followers on Thursday: “Sisi is done … it is over for him and anyone who supports him now will be making a huge mistake.”

Addressing el-Sisi directly in the tweet, Waked added: “Get smart stupid. Leave and let the people take what belongs to them.”

Analysts and politicians say the Egyptian government’s crackdown reflects its insecurity and vulnerability at a critical time as Egypt’s economic woes intensify for the poor and middle class.

“The government’s mass arrests and internet restrictions seem intended to scare Egyptians away from protesting and to leave them in the dark about what’s happening in the country,” said Sarah Leah Whitson, Middle East and North Africa director at Human Rights Watch.

“The nationwide crackdown on protests suggests that President Abdel Fattah el-Sisi is terrified of Egyptians’ criticisms.”

Ayman Nour, an Egyptian opposition leader and former presidential candidate, said el-Sisi was also “trying to send a clear message to prominent generals and politicians who might provide an alternative to him.”

Nour said he expects more people will take to the streets now that “the fear barrier” has been broken, saying the government’s heavy-handed approach has only heightened people’s anger at worsening socioeconomic conditions. 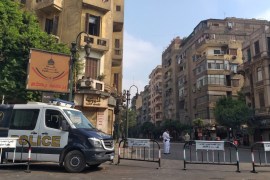 President tells supporters not to worry as security forces ramped up checks and closed off Tahrir Square in Cairo. 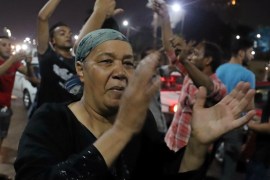 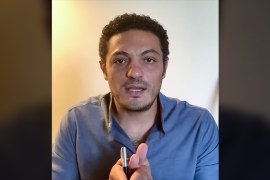 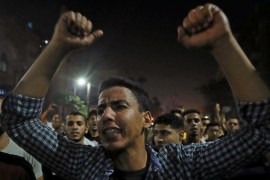