The clashes between the nominal partners in the anti-Houthi coalition, led by Saudi Arabia and the United Arab Emirates, have exposed the divergent interests of the Gulf powers as well as their Yemeni allies.

The separatist fighters in Aden are loyal to the Southern Transitional Council (STC), a political body established in Aden in 2017 that wants to restore independence in the south.

The capture of Aden by secessionists has shifted the centre of the Yemen war to the south and brought renewed focus to the country’s decades-old southern question.

When the Saudi-led Arab coalition intervened in March 2015 to fight Houthi rebels who had taken control of major cities in the country including Sanaa and Aden, the southern separatists and government-aligned forces joined the alliance.

Aden was regained by Hadi’s forces in July 2015, and began to function as the interim capital with the northern city of Sanaa firmly under Houthi control.

Yet tensions in Aden rose in April 2017 when Hadi accused the city’s governor, Aidarous al-Zubaidi, of disloyalty and dismissed him.

On May 11, following mass protests against al-Zubaidi’s removal, the Southern Transitional Council was formed, with the former Aden governor chosen to preside over the 26-seat council. The body immediately declared its intention to “reinstate the Southern State” – a reference to the former South Yemen republic, which existed from 1967 until 1990.

“The STC wants to have authority over the territories they operate in,” said Sama’a al-Hamdani, an independent Yemen analyst and non-resident scholar at the Middle East Institute.

“This could potentially mean sharing power with the government temporarily before asking for a referendum on secession,” she continued.

“They also want to be recognised internationally for their role in supporting the coalition and the Yemeni government throughout the war.”

Hadi, who fled to Saudi Arabia while the Houthis were still in control of Aden, immediately denounced the STC as illegitimate, but the wheels for southern independence have already been set in motion, Holly Topham from the Sana’a Center for Strategic Studies said.

The STC was behaving akin to what Topham called a “government-in-waiting in the south with state-like characteristics and a would-be parliament, the National Assembly”.

Since 2016, the United Arab Emirates has provided military and financial backing to the Security Belt, a now STC-dominated paramilitary group comprised of some 90,000 Yemeni fighters.

In 2015, the coalition relied on the Security Belt to secure territories in the south and reinstate the government in Aden, with Hadi’s forces regaining full control of the city in July.

Human Rights Watch in 2017 alleged the militia had carried out abuses, including arbitrarily detaining people and forcibly disappearing dozens.

“The STC was considered part of the [Saudi-UAE-led] coalition and a key partner to Hadi’s government,” al-Hamdani said.

Yet the fighting between the UAE-backed Security Belt and government forces supported by Saudi Arabia has exposed divisions between the coalition’s two key leaders.

In January 2018, fighting between the two sides broke out, resulting in separatist forces seizing almost all of Aden while the presidential palace was surrounded.

At least 38 people were killed in three days of fighting, before the Saudi-UAE-led coalition mediated to lift the siege, placing the city under government loyalist control.

More than a year-and-a-half later, the STC regained control of Aden on August 10 after four days of fighting between separatists and Hadi’s troops, which killed dozens and wounded more than 200.

In the aftermath, Hadi’s government accused the UAE of backing a “coup” and conducting air raids that reportedly killed and wounded 300 people in southern Yemen – though the numbers could not be independently verified. In late August, Hadi urged Saudi Arabia to intervene and halt the UAE’s air raids on its forces.

The UAE responded by saying it acted out of self-defence and carried out air attacks on “terrorist militias” – although it didn’t identify them.

To curry favour with the international community, Topham said the STC has been “claiming continued support for the Hadi government in public statements, while simultaneously embarking on an international lobbying offensive for its separatist cause”.

But there are fears the UAE is using the southern separatist sentiment for its own geopolitical interests, especially given the fact the south is rich in natural resources.

“The UAE has economic priority in south Yemen,” Afrah Nasser, an independent Yemeni journalist and analyst, told Al Jazeera. “Their aspirations in the south has to do with their investment interests.”

“If the Houthis were in the south then the UAE would have struck an alliance with them also,” she added, calling the STC-UAE relationship a “temporary marriage of convenience”.

Another important factor is the Bab al-Mandeb strait, a strategic waterway between Yemen and Djibouti where nearly four million barrels of oil are shipped daily to Europe, the United States and Asia.

In a 2014 interview, Hadi said “whoever holds the keys to Bab al-Mandeb and the Strait of Hormuz does not need a nuclear bomb”.

“Bab al-Mandeb is globally significant for international trade,” Nasser said. “Whoever will control this port [Aden] will have the ability to transform the geopolitics of the entire region.”

However, the UAE has not been transparent in what it wants exactly, she said.

“I studied the UAE’s leading English news outlets and in their coverage of the STC they were very vague,” she said.

“We can conclude that this is an extension of UAE policies in the sense that they report on their domestic affairs in very vague terms.”

Cracks in a unified Yemen

While secessionist sentiment in the south has been fuelled by recent political developments, it is rooted in its past. The British established a colony in Aden in 1839 and remained there until withdrawing in 1967, when Aden joined other southern regions to form an independent South Yemen republic. In 1970, a socialist republic was declared, which forged close ties with the Soviet Union.

North Yemen became a republic in 1962 and the neighbours remained separate until 1990, when they finally signed a unity accord, merging the two states into one following two short-lived wars in 1972 and 1978.

Upon unification, the leaders of North Yemen and South Yemen, Ali Abdullah Saleh and Ali Salim el-Beidh respectively, became the new president and vice president of the unified Yemen, and Sanaa in the north was declared the capital.

But discontent over governance began brewing and people in the south began to feel marginalised, as they saw new investments were concentrated in Sanaa, while at the same time oil reserves and natural resources concentrated in the south were being exploited by northerners.

“There was a lot of control and looting of southern resources by the north,” Nasser said.

By August 1993, el-Beidh withdrew to Aden in self-imposed exile.

The following year witnessed a short-lived civil war. Secessionists in the south declared the return of the Democratic Republic of Yemen, but lacking the military support of their former patron, the Soviet Union, they were defeated by Saleh in just three months.

In the following years, secessionist sentiment continued to ferment, albeit underground.

“There were many arrests and detentions of pro-independence southern activists and political figures,” Nasser said.

In 2007, the ongoing political and economic marginalisation in the south led to the formation of the Southern Movement, or al-Hirak al-Janoubi.

Until 2011, the movement staged regular protests calling for the return of the South Yemen republic that attracted crowds of thousands.

The government response to these rallies was brutal. According to a 2009 report by Human Rights Watch, security forces carried out “unlawful killings, arbitrary detentions, beatings, crackdowns on freedom of assembly and speech, arrests of journalists, and others”.

The crackdown generated what HRW called “a climate of fear”, one that simultaneously “increased bitterness and alienation among southerners”.

The establishment of the Southern Movement was not simply a response to the mishandling of governance and economics, Nasser said.

“There are views that the cultural differences in the north and south are incompatible,” she said. “The southerners also view the northerners as patronising.”

The northern centralised government also engaged in “rampant corruption”, she added, and Saleh perfected the divide-and-rule policy – as exemplified in his notorious comparison of governing Yemen to “dancing on the heads of snakes”.

Outside of Aden, smaller separatist movements in other southern provinces do not back the STC’s vision of re-establishing the South Yemen republic through the use of force, with the STC unlikely to easily traverse the fragmentation of allegiances within the south.

“Hadramis [from Hadramaut governorate], for example, have a strong governorate identity and would be unlikely to accept rule from Aden given the greater autonomy it has enjoyed since the outbreak of the conflict,” Topham said.

Additionally, those in al-Mahra province have opposed both the Saudi presence and STC forces moving into their region, and spoke out against the STC in August, she noted.

Another obstacle is the international community’s support for Yemen’s territorial integrity.

“All of the United Nations Security Council handling of the Yemen conflict has consistently affirmed the Hadi government’s legitimacy and Yemen’s territorial integrity as its legal basis,” Topham said.

Furthermore, the STC is “not the only group to claim the mantle of the southern independence cause”, she added, referring to other rival separatist groups with ambitions of representation.

According to Nasser, about 25 other separatist groups exist in the south.

“They are all for independence but have different visions on how to achieve that so in that sense are much more polarised,” she said. “Some reject outside intervention and advocate for a peaceful movement.”

And while the STC is the most powerful of all the separatist groups, it doesn’t have a vision for nation-building, she said.

One significant point was that separatists advocate for independence (itisqlal in Arabic) and not secession (infisal), Nasser explained. The latter was taught throughout schools in the north as carrying negative connotations akin to treachery and betrayal.

But terminology aside, “the struggle for [southern] independence has gone through so many phases it has lost its purpose”, Nasser said. 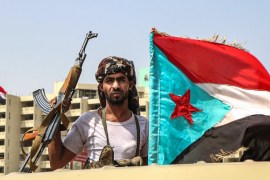 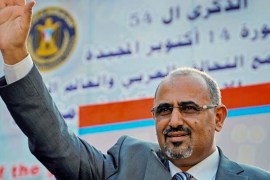 Is the UAE pushing south Yemen towards secession?

South Yemen’s fight for independence is being financed and politically supported by the UAE, Yemeni officials say.