Indonesian authorities closed an airport on Sumatra island on Friday due to poor visibility caused by smoke from raging fires burning through peatland, while schools in several provinces, as well as in neighbouring Malaysia, were suspended due to the hazardous haze.

As this develops, the transboundary haze is threatening to cause more diplomatic tensions between Jakarta and Kuala Lumpur, as Malaysia’s environment minister, Yeo Bee Yin said that Prime Minister Mahathir Bin Mohamad plans to write a letter to his Indonesian counterpart, Joko Widodo “to draw attention” to the problem.

Fluctuating visibility that at times was just 300 metres (0.19 miles) forced airlines to postpone flights to the main airport in Pekanbaru, the capital of Riau province, said Yogi Prasetyo, the airport’s executive general manager.

Poor visibility had also caused delays at an airport in Dumai, another city in Riau.

The worsening haze meant more schools in the Riau and Jambi provinces were closing, education office officials there said.

Health offices in both provinces showed more than 300,000 people suffered respiratory illnesses since the haze began and officials said more people have been seeking medical help for respiratory ailments in recent weeks.

Nearly every year, Indonesian forest fires spread health-damaging haze across the country and into neighbouring Malaysia and Singapore.

The fires are often started by smallholders and plantation owners to clear land for planting.

Many areas of Indonesia are prone to rapid burning because of the draining of swampy peatland forests for pulpwood and palm oil plantations.

At least four of the plantations are subsidiaries of Malaysia companies.

Late on Thursday, Indonesia’s Disaster Mitigation Agency said there were more than 3,600 hotspots on Sumatra and Borneo islands, leading to very poor air quality in six provinces with a combined population of more than 23 million.

It said 37 helicopters have dropped nearly 240 million litres (roughly eight billion fluid ounces) of water and more than 160,000 kilogrammes (352,739 pounds) of salt for cloud seeding as part of the firefighting efforts.

Indonesian authorities have deployed more than 9,000 people to fight the fires, which have razed more than 328,700 hectares (812,235 acres) of land across the nation, with more than half in the provinces of Riau, Jambi, South Sumatra, West Kalimantan, Central Kalimantan and South Kalimantan.

Record Indonesian forest fires in 2015 spread haze across a swath of Southeast Asia, and according to a study by Harvard and Columbia universities, hastened 100,000 deaths.

In neighbouring Malaysia, air pollution index (API) on Friday hit “very unhealthy” levels in one area outside of capital Kuala Lumpur, while 20 other areas across the country recorded unhealthy levels, according to the environment department.

Malaysia’s Selangor state, which encircles Kuala Lumpur, shut 29 schools, on Friday, with orders to close more schools if the API level exceeds 200 – a level considered to be “very unhealthy”.

Malaysian Environment Minister Yeo was quoted as saying on Friday: “We hope Indonesia will be responsible for the fires in their own country.” 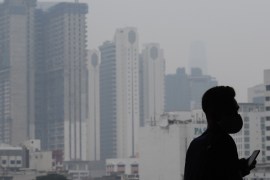 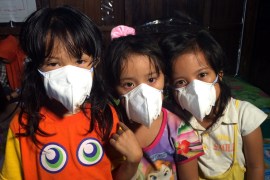 Hazardous smoke from illegal fires is leading to a public health and global environmental crisis. 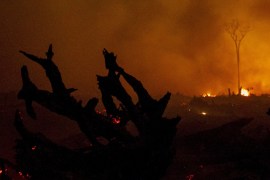 How to stop Indonesia’s forest fires and toxic haze?