At least four people were killed after floodwater gushed through cities, towns and valleys of eastern Spain.

A middle-aged man died on Friday in Almeria after his car was trapped in a tunnel that flooded within minutes, local emergency services said.

A 61-year-old man and his 51-year-old sister died on Thursday when their vehicle was swept away as fast-moving waters swamped a road in Caudete, a municipality about 100 kilometres (60 miles) southwest of the port city of Valencia.

Residents of the Spanish town of Orihuela were stranded on Thursday after floods, caused by torrential rains, swept cars away and blocked roads. Schools in the neighbouring Murcia region suspended classes, expecting the heavy rains to continue.

In the village of Gaianes, 491mm rainfall was reported over the last three days – more than 350mm of that fell in the last 24 hours.

The Clariano River left its banks through the town of Otinyent due to 300mm rainfall within 24 hours.

The well-known coastal holiday resort of Benidorm, on the Costa Blanca, presented its visitors and residents with a miserable 24 hours during which it recorded 135mm rainfall. This was accompanied by a howling northeasterly wind. Those on the island of Ibiza woke up on Friday morning to a severe gale from the northeast.

This windy and extremely wet weather is a result of the first autumn low pressure developing in the western Mediterranean.

Flooding has been reported in northern Algeria and on the Balearic Islands of Ibiza from the same system but the provinces on mainland Spain of Alicante, Valencia and eastern Castilla-La Mancha have been worst hit.

Severe weather warnings continued on Friday for much of eastern Spain, especially the regions of Murcia and Valencia and the island of Mallorca. The persistent heavy rain moved away but severe thunderstorms hit Ibiza, the Costa Brava and other parts of southern Spain.

The weekend will see more thunderstorms develop inland but decrease in intensity. However, the strong wind will continue over the Balearic Islands and onto the east coast. 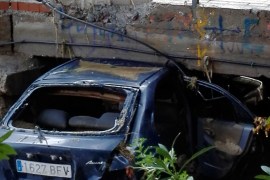 Spain: Summer is over as autumn’s violent storms arrive

After a blazing hot and dry summer, Spain finally descends into stormy autumn.