The United States should distance itself from “warmongers” after hardline national security adviser John Bolton was dismissed, Iran’s president said on Wednesday.

Bolton was one of the strongest advocates of the ongoing US “maximum pressure” policy towards the Islamic Republic.

“Americans have to realise that warmongering and warmongers are not to their benefit,” President Hassan Rouhani said in televised remarks. “They should not only abandon warmongering but also abandon their maximum pressure policy.

“Iran’s policy of resistance will not change as long as our enemy continues to put pressure on Iran.”

Tensions ratcheted up after the US pulled out of an historic international accord signed in 2015 between Iran and the world powers, under which Tehran accepted curbs on its nuclear programme in return for sanctions relief and access to world trade.

The US pressure policy includes crippling sanctions aimed at halting all Iranian oil exports – the economic lifeblood of the nation’s economy.

Iran has called the reimposition of sanctions “economic terrorism”.

Bolton’s dismissal by President Donald Trump on Tuesday raised the possibility of talks between the arch rivals after more than a year of escalating tensions, including Iran shooting down a US drone and the American military nearly launching a reprisal attack.

Iranian presidential adviser Hesameddin Ashena hailed the firing as a “clear sign of the defeat of America’s maximum pressure strategy” against Tehran.

But Ali Shamkhani, a top Iranian security official, said Bolton’s exit has “no impact” on how Tehran views US policy. He said what matters to Iran is American “compliance with international commitments, as well as lifting cruel and illegal sanctions”, the semi-official Fars news agency reported.

Immediately after Bolton’s departure, US Secretary of State Mike Pompeo said Trump could meet Rouhani for talks at an upcoming United Nations meeting with “no preconditions”.

However, Iran’s envoy to the UN, Majid Takhteravanchi, said Bolton’s dismissal didn’t change its position that there will be no negotiations until economic sanctions are lifted.

“The departure of … Bolton from President Donald Trump’s administration will not push Iran to reconsider talking with the US,” Iran’s IRNA news agency quoted Takhteravanchi as saying.

Trump, meanwhile, left open the possibility the United States could ease sanctions on Iran, saying on Wednesday he believes Tehran wants to strike a new deal on its nuclear programme.

“We’ll see what happens,” Trump told reporters at the White House when asked about the possibility the US would ease its pressure campaign.

One analyst cast doubt on speculation Bolton’s removal could boost the chances of a meeting happening at the UN General Assembly later this month.

“Such a meeting will not take place. The removal of a moustache person [Bolton] from the White House means little,” tweeted Mohammad Marandi, head of the American studies department at Tehran University.

The US announced new sanctions on a “wide range of terrorists and their supporters”, including Iran’s Revolutionary Guards, after Bolton was fired on Tuesday .

As the world—minus 3 or 2 panicked cohorts—was breathing a sigh of relief over ouster of #B_Team's henchman in the White House, Pompeo & Mnuchin declared further escalation of #EconomicTerrorism against Iran.

Zarif has often said a “B-team” – that includes Bolton – could goad Trump into a war with Iran.

Iranian officials also accused the US and Israel of “undue pressure” over its nuclear programme, and warned it could be “counterproductive” to cooperation with the UN’s nuclear watchdog.

Tehran’s ambassador to the International Atomic Agency (IAEA), Kazem Gharib Abadi, said recent statements by US officials and Israeli Prime Minister Benjamin Netanyahu amounted to “a US-Israeli plot” to put pressure on the agency and its inspection activities in Iran.

Abadi told reporters Tehran “interprets these acts … as undue pressure on the agency”.

The dispute centres on the IAEA calling on Iran earlier this week to “respond promptly” to the agency’s questions after reports that unexplained uranium was found at a facility.

Netanyahu has accused Iran of operating a previously undisclosed nuclear site aimed at developing nuclear weapons, and then destroying it after it was detected.

Iran has abandoned commitments under the nuclear deal Rouhani said on Wednesday further measures could be taken “if essential and necessary”.

On Saturday, Iran began installing advanced centrifuges to enrich uranium at a faster rate, its third step in reducing pledges.

Asked how much uranium Iran intended to produce, Abadi said Iran would do so “to the extent that the country is in need”.

Trump said it would be “very very dangerous” for Iran to enrich uranium, a key step in developing a nuclear weapon.

“I do believe they’d like to make a deal. If they do, that’s great. If they don’t, that’s great too,” he said. “They have tremendous financial difficulty and the sanctions are getting tougher and tougher.” 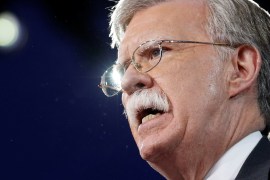 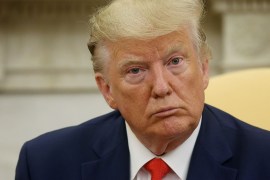 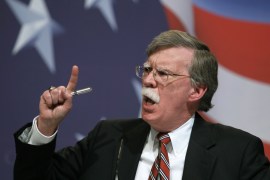 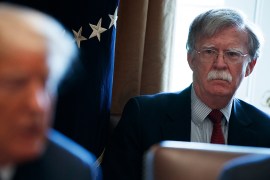